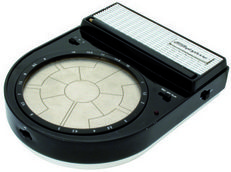 If the return of Rolf Harris in those Churchill adverts (not quite the high calibre of celebs in Norwich Union ad) has instigated a yearning sense of nostalgia, you might want to wave your hands in the air (like you just don’t care), as the Stylophone has just made a triumphant and peculiarly shaped return to jar the ears of younger generations with its weird and audibly striking sound.

With its new curved reincarnation, you can select drum kit, beatbox, or bass stylophone (much to the annoyance of the people that know you) and play a selection of irritating songs to your hearts content. Or get your scratchy scratchy on, with its scratch function button. It’s a must have for any Rolf Harris or retro synthesiser fans.

Now for some Stylophone factoids: Did you know the stylophone was famously used on the intro to David Bowie’s Space Oddity and The Robots by Kraftwerk? And I bet you didn’t know the stylophone is listed as being played by Jack White on the Raconteurs’ 2008 album Consolers of the Lonely? And Just to clear up any confusion, Rolf Harris didn’t event the tinny synthesiser – as one of the big (dare I say) celebs of the 70s he was brought on board to promote it and it proved sooo popular, he was mistakenly credited with being the brain child behind it.

Like this? Read this: Get retro sounds from the re-issued Stylophone