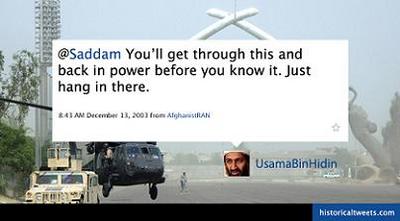 Twitter is taking the world by storm – even the celebs want in on the Twittersphere. But can you imagine if the internet made an appearance waaaay before Vinton Cerf came up with the brain wave in 1973, and simultaneously, the ancestors of the brain box’s behind Twitter invented microblogging and brought us Twitter at exactly the same time? I’ve often wondered what the forefathers of yesteryear would have Tweeted about? Have you? Well put those imaginations away, someone’s done the visualising for you with the creation of Twit History. Follow the thoughts of famous people in key moments in history attempting to document their moods/feelings/emotions in just 140 characters – and why not have a chuckle or two along the way.

Read a few historical tweets after the jump…

Martin Luther King: It’s 1963 in Washington DC, His infamous speech is looming, and a few days before that inspiring speech is made, he tweets – ‘Bought a sleep journal. I keep having dreams but forget to write them down.”

Neil Armstrong: There are many people who believe the first landing on the moon in 1969 was actually an illusion filmed in a studio somewhere. Well, his tweet would definitely have been testament to that theory and given the game away – “Headed to the set… I mean moon. LOL. You been practicing slow motion “no gravity” walk?”

And lastly, here’s a brilliant tweet from Hitler – ‘Psychic looked into crystal ball and said I would be a big douchebag with bad facial hair. Growing mustache to prove her wrong’.