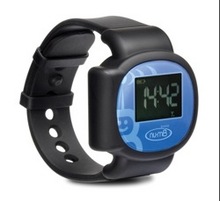 Previously, looking at technology allowing you, as a parent, to track your child via GPS has horrified me. How are kids ever going to learn the art of ‘yeah mum, I’m at Katie’s house (ha ha ha, I’m totally hanging out at the park)’ if parents insist on having a latitude and longitude at all times. This hasn’t done much to pacify me, particularly since you can lock this watch on a child’s hand, dissuading all but the most determined of children of dumping it i.e. only those willing to sacrifice their own arm for the chance to hang out at the park.

This watch will send out a text message with the location at the demand of the parent, which promises to be accurate to within 3 metres. It’ll also triangulate the position through GPRS, in case the child is indoors, where GPS doesn’t work so well. Removing the watch will also trigger an alarm, sending a text and an email to the parent.

In the manufacturers defense, he’s hoping that this will allow parents to feel more secure in allowing their child to go out and play, which seems a nice way of looking at it. I guess it only becomes scary when you’re 21 and your parents are still asking you to wear it…