Samsung do seem to like leaking phones don’t they? I remember not that long ago they sparked one helluva public debate after they launched all those intriguing Pixon ads before launching it to the public. Well it looks like they’re adding to their camera phone stable, with another competitive looking 8 megapixel phone, codenamed Loche. 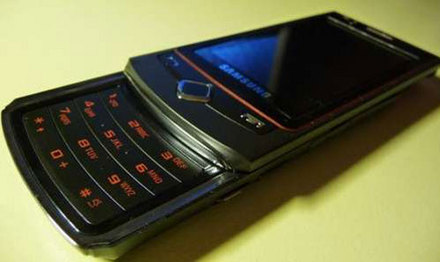 Call it Loche, call it the less catchier S8300 if you will, what we have here is a sliding candybar handset that’s a slimline 12.8mm thick, and can easily access a whopping 7.2Mbps on the HSDPA data network. It has an integrated GPS sensor, and a 2.8 inch AMOLED touchscreen, which sounds really impressive. It’s WQVGA as well, which means you’ll be able to view it from any angle and the camera includes an auto flash in low lighting situations, which might be a first for camera-phones. How useful would that be- no altering settings, just snap and blind!

You also get a rather shoddy 60MB of internal memory, but it’s expandable with a microSD card. The usual Bluetooth features are there, but the focus really has to be the camera aspect- and I can’t wait to try it out!

Pricing and release date will all hopefully be released at MWC in Feb .