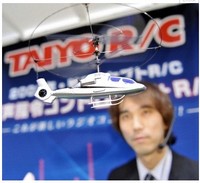 It’s only the 16th day of the first month of the year and we’re already seeing a bunch of jaw dropping, swoon-tastic toys that’d make any lover of innovative gadgetry in toy-form light up like kid in a candy shop (or a geek in an Apple store). The mundane toys are without a doubt being separated from the ohmygodIwantone variety. Take this voice controlled helicopter for instance, it’s soooo much cooler than a bog-standard remote control model (that’s so last year).

The company making it all possible is a Tokyto based corporation called Taiyo corp. It will be releasing voice-controlled 18cm helicopters that can understand English and Japanese up to 10m away using the following commands – “up”, “hold”, “down”, and “stop”. They seem to be short of a few commands (like “forward” and “backward”), but hopefully they will have fixed this little mistake by the time it’s released in March for $60 USD.