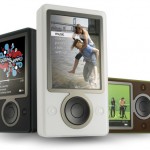 Overseas the battle rages on between Microsoft’s Zune and Apple’s players, but here in the UK it’s a rather different story. Sure, some die hard fans may have imported the Zune’s from abroad (Duncan, I’m talking about you) but most people tend to be fairly unaware of the power of the Zune. Which is fair enough, after all, if I spent my whole life yearning after the Ahikabara gadgets from Japan I’d never get anything done.

Well why is this so exciting? In these uncertain times, the fact that Microsoft are putting their money where their pockets are gives hope to people, as well as meaning that this media player has the possibility to seriously challenge Apple.

The Zune is attractive to many US citizens because of its easy interface, lack of pretentious software and storage capacity of up to 120GB. Add to that the fact that you can wirelessly pick up tracks and radio stations, and it’s easy to see why Apple would like it to die a painful death. Oh, and it’s cheaper as well.

The next phase for the Zune apparently consists of ‘hardware and software updates’, and whilst no info is given on what they’ll be, I’m imagining sleeker casing, more colour options, and most likely a touch screen. It would also be great if they let you pick up internet radio, so fingers crossed we’ll hear some exciting news soon.