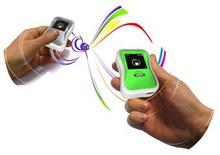 News of new technology in peripherals is like the sweet, sweet voices of angels to me. The Leyio is a ‘Personal Sharing Device’ (PSD) and it uses Ultra Wide Band (UWB) to transfer data between compatible devices. Woo! New acronyms!

Essentially, it’s a 16GB USB stick, which will hold just about anything you ask it to. When you find a friend who also has a Leyio, you can transfer any folder or file you specify, with a flick of the wrist (a bit like the action of fanning out a deck of cards, apparently). And you can ensure you’re only sharing the files you want, as there’s a little screen on the device which allows you to pick the contents available.

It’s fast – apparently a 3MB file such as a photo will transfer in less than half a second, and secure – there’s a fingerprint scanner ensuring you’re the only one who has access to the full contents.

They’ve solved the proprietary problem as well. If you want to transfer data with someone who has a USB stick, there’s a plug on the Leyio which will allow you to plug in the stick and transfer files that way. Both when this happens, and when you plug it into a PC, you can pick the files that are viewable, effectively making the others invisible.

All in all, they seem to have thought of everyone, which is suspiciously wonderful. And it looks like they come in different colours.

I must have one of these immediately. Just as soon as they release the pricing.