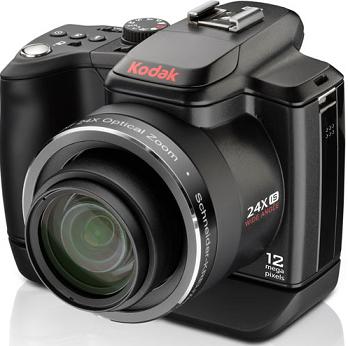 When it comes to the Kodak Z980, it’s all about the zoom, or more appropriately, the megazoom. On offer, is a 26-millimeter wide angle lens with a monstrous 24x image stabilised optical zoom. There’s also a 12 megapixel sensor underneath its chunky exterior, a vertical shutter release, high definition video and picture capabilities and a detectable vertical grip. As well as the above, it comes equipped with Kodak’s Smart Capture feature for automatic camera adjustments and a Schneider-Kreuznach lens to give the camera more pizzazz.

Kodak also unleashed another addition to its M-Series digital cameras – the M380. Think 10 megapixels, 5x optical zoom and a 2.7-inch screen. Its due month is March and it’ll be available in black, red and teal for a cool $179 USD. But no picture I’m afraid.

Get the low down on CES so far right here