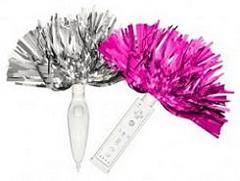 It wouldn’t be a proper cheerleading gaming experience without some rah-rah pom pom action. It would be better however, if the pom poms didn’t look like Christmas decorations fashioned into pom poms for your Wii remote, and quite frankly, a company called Hip Street should know better than to bring out something that doesn’t quite fit into what is deemed ‘Hip’ or ‘Street’. But as the only cheerleading accessory out there, you’ve got to make do with what’s available.

The Wii Hip Street Pom Poms attach to your Wii remote or Nunchuck so you can shake your tail feather and cheer with the essential equipment – just like a real cheerleader.

They haven’t exactly set the gaming world alight, with many calling them the worst gaming accessory of the year (c’mon it’s only January), but if you’re finding it hard to contain your excitement and you happen to own one of the few cheerleading games available such as, Wee Cheer and All Star Cheer Squad , you can get your pom poms here for $19.99 USD (no cheerleader try-outs necessary).

So, all that’s left to say is – gimme a G, gimmie an O, gimmie a Wii… Goooo Wii. Or in the words of Gabrielle Union and Kirsten Dunst… “Bring it on”.