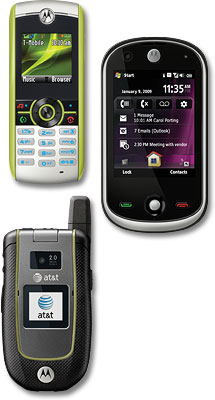 Last month, we told you about the Attila handset from Motorola that’s set to instil fear into the mobile community with it’s warrior like qualities – 2.8-inch touchscreen, WiFi, HSDPA, HSUPA and 5 megapixel camera. Well, it turns out the Attila isn’t the Attila anymore. It’s been given a new appellation – the SURF A3100. So, it looks like the Renew W233 has a few brethrens joining it for release this year – the SURF A3100 and the Tundra VA76r.

With touchscreen capabilities, the SURF sounds like the best offering of the bunch. As well as the specs listed above, it boasts Windows Mobile Professional 6.1, 7.2Mbps triband HSDPA, AGPS, microSD slot (expandable up to 32GB apparently), and a lengthy 2.8-inch touch display, with a custom skin designed by Moto. And contrary to what we wrote previous to this, it’ll sport a 3 megapixel camera as opposed to 5.

Next up, it’s the Tundra VA76r – a rugged 3G flip phone with push to talk (which lets you chat walkie-talkie style). Information on this one isn’t as abundant as the others, but at least it comes with a release date – 13th January (Stateside only folks).