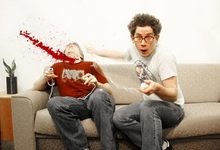 The last thing you expect when joyously unwrapping your new console is to end up legs akimbo with a cast on your leg, but it seems that Wii mania is actually causing these casualties. Yes, this top notch gaming system seems to be proving fatal to your health as more and more people are reporting themselves hurt after attempting activities such as Wii fit (hula hoping can be a killer on the knees) or Rayman Rabbids (who knew virtual snowboarding could be so dangerous?)

Doctors say the rise in injuries is due to families trying to keep up with their kids and attempting manoeuvres that should be left to their more experienced five year old.

Doctors from the British Society of Surgery for the Hand say that they’ve seen people with hand injurious form over enthusiastic Wii tennis paying, and advise people to play with caution. Hey guys, this is a young peoples sport OK?

Perhaps the solution is for Wii’s to come with a safety warning and adults should only be allowed to a play with someone under the age of fifteen to supervise. I think that could work…

Here’s what happens when you make a mistake…