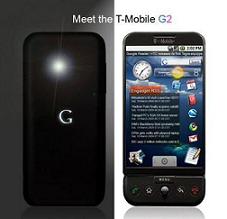 The G1 dust hasn’t even settled yet and those Android G2 rumours are doing the rounds again. The T-Mobile G2, as the device will reportedly be called, is expected to trump the G1 in the specs department, and I should think so too. A five megapixel camera, memory card slot, VGA camera for video calling capabilities, WiFi, full touchscreen, the riddance of the QWERTY keyboard and a trackball are all tipped to feature on the G1’s successor.

The only factor that puts this entire rumour into dubiousness is the release date. Cell Phone Signal outrageously claims the 26th January will be when it makes its debut, whereas Boy Genius gives the much more feasible release date of April. Something tells me, T-Mobile wouldn’t want to pee off the thousands of G1 owners by bringing out a bigger and better vesion only a few months after the G1’s release, so you’re guess is as good as mine as to just how much truth is actually in all the buzz.

The new handset could also be free from T-mobile and sold elsewhere around the world, which also means it could potentially drop the consecutively named G2 name tag.

And finally, throwing the entire rumour into questionable territory is reports of the G3, which is apparently around the corner. So, needless to say, it’s a little difficult to ascertain any kind of truth at the minute, but the prospect is exciting, yes?