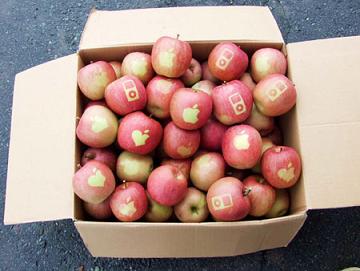 When it comes to showcasing your love of those omnipresent iPod makers, Apple, Steve Jobs or any product from the Apple tree, it wouldn’t be totally off the mark to say this fan has taken his Apple fanaticalness to the extreme. There are some Apple zealots who profess their love for Apple by simply buying an Apple product (or stealing it) and treating it with the utmost love and care. Some of you take it a bit further by setting up camp outside major Apple stores prior to the release of an impending new product. But one enthusiastic Appleton decided to take it waaaay out of the box by growing his own Apple… apples. Well they’re actually Fuji – sadly he hasn’t found a way to grow his own MP3 players.

This was no easy achievement, or speedy accomplishment for that matter. He managed to complete this madcap idea by applying Apple oriented stickers to a bunch of premature apple (in his own apple orchard by the way). He then waited for them to ripen, peeled off the stickers, and Volia, Apple apples.

I’ve read about overzealous Apple fans doing cerazy things to showcase their dedication and commitment to Apple, but this is perhaps a little fanatical? So what would possess a man to do such a thing? Well he does have his own orchard. Or maybe it’s just that some people have waaaay too much time on their hands and are in need of a hobby. 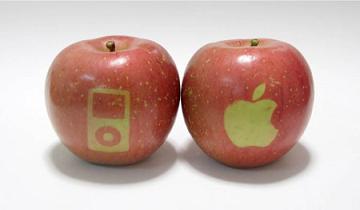 Check out the Apple section here