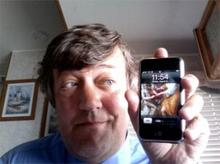 The Blackberry Storm was the focus of Stephen Fry’s rage a couple of weeks ago, and now, he’s aiming his Twitter at Vista and Sony Vaio. And this time, he’s used the C-word. Ooooh.

It seems this owner of nine Macs just needed one PC running Vista in order to review things, but trying to set it up on his network wasn’t the piece of cake he wanted it to be. Or in his own words ” I don’t need another fucking mac. I just want ONE ARSING PC that isn’t complete SHIT”.

Who’s going to get the Fry Twitter treatment next? Could it be Google? HTC? Toshiba? One thing’s for sure – it won’t be Apple.