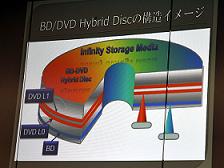 A company called Infinity Storage Media have been busy crossbreeding Blu-Ray and DVD formats to create a hybrid disc with both data layers, capable of playing on your budget and bottom of the line DVD player and in high definition on your Blue-Ray player. This isn’t a new concept, but Infinity Storage Media is the first to make the idea a reality and bring it into production.

Now for the technical bit. The hybrid disc is able to make use of both formats due to a semi-reflective layer that’ll block the blue laser used by Blu-Ray players penetrating the interior layers of the disc where the DVD information in stored. Regardless of the outcome of the format war, this will make it so much easier to make that transition from DVD to high definition viewing. And best of all, hybrid disc users can choose to watch it on a standard DVD player or see it in all its Blu-Ray glory.

The first Blu-Ray/DVD title – Code Blue – is making its appearance in Japan and sadly, there’s no word on other countries following suit.