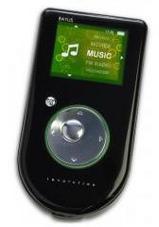 Hippyshopper‘s Abi has been testing out the eco-media player, which is the latest brain manifestation of the environmentally friendly Trevor Baylis. The player itself works via your winding power, using your kinetic energy to power its media playback.

Read on for Abi’s full review…

Size-wise, this is still a chunkier piece of kit than many of us are used to in an age of iPod Nanos and super-slim phones. But I’m sure I’m not alone in prefering a more substantial gadget, which you’ll always know is there and won’t slip through any holes in your pockets. Its smart black casing makes the Revolution look slick and respectable enough that its size does not detract from its appearence too much, and when its green LED lights come on, it’s not bad looking at all.

The sound quality is pretty impressive, and I also liked the in-ear headphones it came with (which are not the cheap and nasty sort I’m used to getting free with media players). Music sounded rich and crystal clear, and once I’d managed to locate the volume (which is controlled using the central menu button) was happily finding levels that worked in all situations from a quiet doctor’s waiting room to the Tube at rush hour.

Perhaps the main benefit of this type of player – other than its no-batteries greenness – is the ability to charge it wherever you go. The sheer joy of this feature cannot be over-estimated, as it completely removes the possibility of that terrible disappointment you get at having your player run out of juice on a long journey you then have to suffer in silence. It’s quite incredible how quickly the player re-charges, and I have not had to wind it more than once on any of the 15-20 minute journeys I took while testing the Revolution. A connecting lead will also allow you to charge your mobile phone using the same wind-up technology.

The radio is a welcome addition to this version of the player, and tunes pretty well, with built-in pause, record and playback features. You can also use the screen to view photos with the option of a slideshow view if you like to take your pictures on the move.

Overall, I’d say I would be happy to recommend this product. The menu does take a bit of getting used to, and is not as instantly as intuitive as some, but all other features worked as well as in any traditional media player I’ve tried, while others (the instant re-charge facility in particular) turn out to be more of a bonus than you might expect.