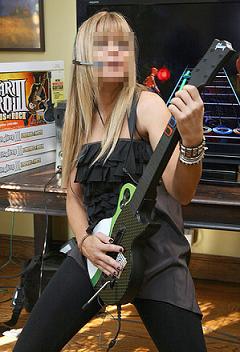 Who’s the rock chick with the guitar playing stance, complete with GH guitar and Xbox Live headset? Not a clue? Let me assist.

She’s notorious for being a bit of a rock chick, dating many, many rock stars and being one of the biggest sex symbols out there – which is probably why she was chosen to host a Guitar Hero party. She’s also an American glamour model, adorning Maxim covers across the world, is famous for her raunchy appearances with the Pussycat Dolls and has featured in more than a few parody films playing the token bimbo – including Scary Movie and Disaster Movie. It goes without saying, she totally rawks.

Find out who she is after the jump… 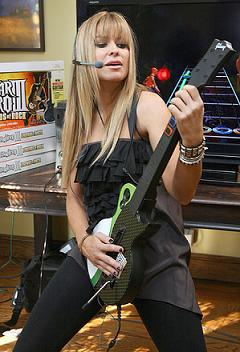 Did you get it right? It’s the effervescent Carmen Electra rocking out to Legends of Rock in multi-player mode over Xbox Live. It may just be the picture, but something tells me she’s a bit of a pro when it comes to Guitar Hero gameage, or maybe it’s the pointers she picked up from ex-husband and guitarist Dave Navarro.

One thought on “Guess who's a huge Guitar Hero fan”