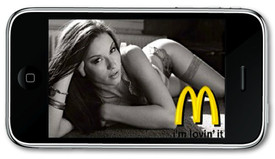 When the phone gets accidentally left in McDonalds it’s rather as shock for the kinky photos to then turn up online, but hey, at least they got their iPhone back. I think they should be thankful.

Considering the average wage of a McDonalds worker I think a little invasion into their privacy isn’t to terrible though I don’t condone the employees for posting personal info and phone numbers, that’s just rude. But returning the iPhone, seriously, what mensches.

So how did this come about? Well Philip Sherman left his Phone in an Arkansas McDonalds, When he called the shop, they said they’d hold it till he picked it up, which he did. However in the interim period his wife, one Tina Sherman (the wifey) received saucy calls saying they liked her McMuffins and the couple learnt that private images of theirs had been posted online, along with private contact details. They’re now demanding £2 million of McDonalds in personal damages. Will they or wont they pay? The franchise is declining to comment, but all I have to say is, they got their iPhone back! Honestly, how about a little gratitude.