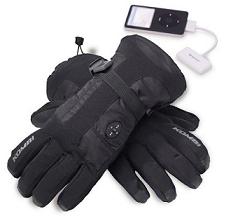 The calendar may say November (so it’s not officially winter yet) but the weather over the last week has been downright winterish. It feels like we’ve been below freezing recently and the bouts of snow and monsoon style rain hasn’t helped. So, the gloves and scarfs are out, but this poses a potential problem – how do we control or gadgets? We’ve already got the Dots Gloves for easy texting/MP3 player control, but wouldn’t it be cool to control our devices wirelessly from our gloves? Enter the Ski Glove iPod Controller.

The gloves possess a small control pad on the outside that sends a wireless signal to your iPod, allowing you to control it without actually touching it. All you need to do is connect the RF receiver to your iPod and away you go. How’s that for convenience?

They’re not the most attractive gloves, but when you’re buried underneath a huge coat that makes you look like the Michelin Man and wrapped up in a scarf that could give a burka a run for its money, does it really matter that your hands look a little bloated?