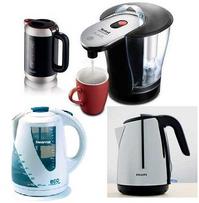 In the first of a series on how to green up your home, we look at one kitchen appliance it seems we Brits can’t live without: the kettle. Kettles use big bursts of energy to heat water up to boiling point, but the good ones will do this quickly, with as little energy loss as possible.

Eco kettles tend to fit into one of two categories: the first work by heating the water with as little energy as possible (sometimes to a temperature that’s not quite boiling); the second are designed with in-built features to try and stop you boiling more than you need.

We’ve tried all sorts, and from an office that has far too many kettles for its own good, I bring you our roundup of kettles we’ve tested, and our verdict on which one offers the greenest cup of tea.

Never before has a kitchen appliance generated such controversy…the Tefal Quick Cup divides people in ways I never thought possible, and has to this day generated more comments on this site than any other product we’ve reviewed.

The truth of the matter is that it IS quick (60 seconds to produce a normal sized cuppa) but it won’t boil the water, making it not ideal for certain beverages. I find it works fine for herbal and green teas (which are best served at around 80 degrees) and it’s great if you need to make a Lemsip. But it performs badly for granulated coffee, as the grains don’t fully dissolve. On a cold day, you may find your drink cools down rather quickly, and the water also tends to come out with an unappetising foam, which some drinkers may find distressing. In terms of energy saved, the quickness is the issue here, as the electricity consumption during use is slightly higher than any other kettle we tested.

Verdict: quickest overall, poorest quality results and not the most efficient

A newcomer to the eco kettles market, this sleek, black number will certainly look stylish in your loft apartment. Not only that, it will allow you to drink green and other ‘speciality’ teas at the correct temperature, since it gives you the option of heating to 40, 60, 80 or 100 degrees at the touch of a button. If you drink green tea a lot, this will inevitably lead to a saving; if you’re mostly going up to 100 then you’ll still be doing relatively well, as it used the lowest wattage of all our kettles when boiling; it was very slightly slower to boil than the other kettles in this trial, but the low wattage means this should cancel out if you remember not to over-fill it. Heating to 80, however, takes just 43 seconds and peaked at 2108 watts, making it far more efficient than the Tefal at heating to a point below boiling.

Verdict: lowest overall wattage, nicest looking but not the quickest out there

When I first used this kettle, which lets you pump out the amount you need each time you boil it, I thought ‘hmm – a kettle for dummies’. Do we really need a gadget to make sure we’re not boiling too much? But having got used to it, I’d say the answer is often yes: when in a hurry, it’s all too easy to just boil what’s already in the kettle, but with this model, you’ll need to tell it how much to boil each time.

I don’t find this wastes any time in the drink-making process, as the kettle is quite a fast boiler, getting to 100 degrees in 1 min 15 seconds in our test. In terms of looks, it’s frankly a bit of an ugly beast. But it does its job well enough.

Verdict: Great overall value, efficient and quick boiling, best method at preventing over-filling but unwieldy to use and looks bulky

Philips One Cup
£24 at Argos

In order to encourage us to use less water (and less energy) Philips has come up with the low-tech solution of making the mug measurements really prominent. The idea is, if you can see the water measurements more easily, you’ll be more aware of how much you’re putting in.

The water is measured in “cups” rather than millilitres, and while I usually find these are far from accurate, one mug does actually fill one mug on this kettle. The downside is that while you’re tying to fill it from the tap, it’s not always easy to see how much you’ve put it, and I’m never sure if it’s better to boil what you’ve got, or tip the excess down the sink (the plants in our house only require so much watering).

The Philips 1 cup is hardly a bold step forward into solving our energy crisis, but it does live up to its promise of helping you to use less water. If you already have a working kettle, there’s no point switching to this one – filling your kettle a mug at a time works just as well (or just getting used to how much you need to put in). Oh, and one thing that’s definitely in its favour is that it’s a lot better looking than most eco-kettles on the market.

Verdict: Good value for money in terms of energy saving and design, very fast boiling makes up for higher wattage

The ‘control’ in our experiment is next door’s flashy ‘mood light’ kettle, which I’ve been secretly lusting after with its colour-changing ways, even though I know it’s probably a real energy guzzler. I was right in one respect: when the mood light setting is switched on (which also works as a ‘keep warm’ feature), the kettle is using 60 watts — quite a lot if you’re going to leave it sitting there for instant cups on tap. However, it was fairly efficient at boiling, doing the job in 1 minute and 10 seconds; quicker than some of our ‘eco’ models. The wattage was a little bit higher than all of them though, so you can breathe a sigh of relief if you’ve just bought one.

Verdict: A good choice in terms of boiling speed but steer clear of the flashy features if you want to be green

* One cup, in this experiment is a large mug size of 400 ml, the ‘minimum amount’ indicated on many kettles

Check out more from Hippyshopper here