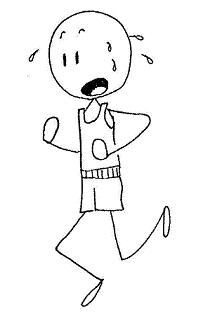 The big bumper tins of chocolates have started creeping into supermarkets across the country, filling whatever gaps they can in an attempt to lure us into a chocolate-y trap, making us want to take up the two for £10 deals and pile on those calories/pounds. This can only mean one thing – Christmas is nearly here (yay). When the end of the year kicks in and that guilt-ridden ‘get fit’ new years resolution you made is failing badly and the wave of guilt is coming at you like a tsunami, fear not, just turn to your sporty mobile by making it your new personal trainer.

It’s fair to say we take advantage of our phone’s features for *a lot* of useful (and sometimes not so useful) things – taking pictures, maps, satnav, games, music player, internet browser (to name a few) – so why not add one more to the list of to-dos a phone can accomplish.

Check out the round-up after the jump and find out what handsets could potentially make you fit and more importantly, how rigorous the training is.

This phone is seriously sports equipped, and apparently, the MiCoach is the first handset to be specifically designed as a training device. For a start it features a sensor to measure the distance of your strides which straps into your laces. It also has a heart rate monitor that goes around your chest – both of which are connectable via Bluetooth. If you’re really going for it, you can set up a training plan (from beginners to professional level) online which can be updated via the pedometer and heart rate monitor, letting you know if you’re making progress or if you’re still a long way off. Programs include things like interval and stamina training, so expect to sweat.

This handset has been packed with a bunch of features to make your exercise routine more pleasurable, such as its Bluetooth stereo – so no disrupting wires when running for your life – and the shake feature (shake handset to change track). In a similar way to the MiCoach, the W910i also includes software to keep a record of all your workouts to keep an eye on improvements – although this doesn’t stretch to uploading results into the online world.

Not only is the N96 a great bit of eye candy, but it houses some useful fitness features too. If you’re one of those runners who like to opt for a different route once in a while, using the responsive GPS will prove handy when trying out your new path. And its sizeable screen makes it all the more easier too. Group that together with Bluetooth stereo capabilities and the N96 makes for a useful and convenient fitness tool.

The iPhone itself isn’t actually fitness friendly, but its apps sure are. Take RunKeeper for example – it allows you to track your run using the built-in GPS and review your run plotted on Google Maps, taking into consideration details of elevation and how this affected your speed.

Not a fan of running around the block in freezing cold temperatures? iFitness provides an extensive database of instructional images for over 100 exercises… that can be carried out in the luxury of your bedroom.

All phones mentioned can be found at www.mobile-phoes.co.uk for competitive prices.