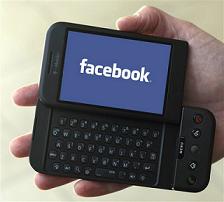 The stalemate between Facebook and Google over an official Facebook application has developed and, ladies and gents, there’s been a breakthrough. There is now a Facebook app for the G1. Which is good news for many Facebook aficionados, because let’s face it accessing it via the web browser is just not the same, is it?

It was initially hoped a dedicated Android fan with way too much time on their hands would do the honours and develop the app, and it seems initial prayers have been granted. The third party developer in question is Next Mobile Web, who’s designed the Facebook app fBook, which optimises the Facebook app for the iPhone. Apparently, it’s the same as going to m.facebook.com on your browser, but with added perks such as uploading pictures.

It goes without saying there’s much room for improvement and hopefully this isn’t the last we’ve seen of the Facebook applications for T-Mobile’s G1. Still, if it appeases Facebook app-wanting zealots, it’ll do for now.

Take a look at the latest phones here