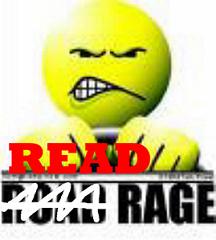 Hate reading Manuals? Would you rather walk your way through your new gadget yourself, completely unassisted, rather than having to trawl through pages and pages of over repetitive, monotonous, increasingly and unnecessarily complex instructions that could have been whittled down to half the size of the bulky book the manufacturers expect you to use? You’re not alone there. Research from The TechGuys has identified we’re currently experiencing a read rage epidemic at the moment and it’s sweeping across the nation taking as many victims as it can.

I’m a victim, that’s for sure – manuals are one of the biggest bains of my life. Perhaps it’s because I’m a product of the self fulfilling prophecy and all those years of being called “impatient” by my mother resulted in me being the intolerant person I am today or perhaps, like the 62.8 percent of people who took part in the survey, I just hate to read manuals.

The read rage phenomenon is sweeping across the UK with 40 percent of respondents becoming so irate with incomprehensible language and all the other negatives that go hand-in-hand with manuals they’ve yelled with frustration (been there). They also discovered one in five of us get so aggravated with manuals we throw the offending item across the room (been there too). Interestingly, the study also discovered women are more likely to succumb to read rage than men, so much so we become aggressive and irrational (damn it I’ve been there too).

I’m glad to see it’s not just me who has a real pet hate for manuals that make me want to rip my hair out and bang my head against a wall. Not having to whip out a Manual says a lot about the usability and ease-of-use of a gadget and also makes me a very happy lady. Although I must admit, sometimes it is imperative to the workings of your gadget to succumb to the pressure and refer to manual, but generally I have the strong belief manuals should remain in the unnecessary and unused department.

Lucy is the editorial assistant for Shiny Shiny and doesn’t see what’s wrong with a bit of good ole’ trial and error.