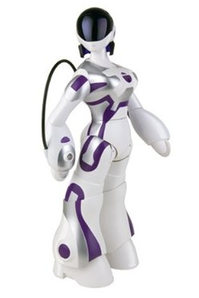 I don’t mind admitting it – when I first saw this robot I wanted to *be* Femisapien. She looks hot. And she dances. And the original Robosapien did some really cool stuff, so I’d assume the Femisapien would get the same treatment.

She’s a girl, right, so she dances. And whilst the original Robosapien got to stride around doing his roboty thang, this poor robot girl gets to “slow pose, be your back-up singer, introduce herself, dance with you, and even blow kisses”. Slow pose? Blow kisses?? Somewhere there is a transformer turning in its grave.

(I would never have predicted my life would lead me to indignation over the sexism in the robot world).