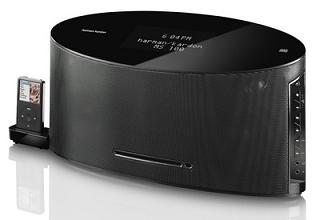 As you’ve probably garnered from the picture, this is one behemoth of an all-in-one audio unit. It’s not as attractive as those crystal-y speakers we saw earlier from Harman-Kardon, but it does pack some serious all-in-one audio goodness. This isn’t some kind of lame trick from Harman-Kardon either, attempting to dupe you into buying something you believe does a multitude of things – it actually does. It’s an iPod dock, a CD player, FM radio, speaker system and a clock radio. It’s a whole lot of convenience rolled into one, as well as being a great space saver.

For added convenience it comes with a remote control and has S-Video and composite video outputs in case you want to show off your iPod pics and vids on TV. And to sync your best tracks for your iPod from iTunes, simply connect it to your PC via USB and let the head bopping begin. As it’s got three auxillery inputs, you’ll be able to hook it up to non-iPod music devices, or your turntables, or some kind of other audio source, if you find its five main features aren’t enough for you.

The MS100 (its official name) will make its presence in shops known in October. We’re forced to omit the price as it hasn’t been revealed to us yet.

For more IFA coverage, you know what to do