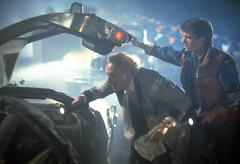 High definition television will ruin you for normal TV. You’ll never want to sit and stare at the grainy, low-grade standard def ever again if you switch, which is a shame since there are still an awful lot of channels yet to offer up the brand spanking shiny new loveliness of HD.

Good news comes to us from the Sky press office, however. Seven more channels are being added to the HD channel palette. Keep reading for the full line up and a couple more weak jokes.

Six movie channels: Action/Thriller HD, Sci-Fi/Horror HD, Drama HD, Modern Greats HD, Family HD and Comedy HD; and Sky Real Lives HD, which is inevitably going to be the channel that sucks you in even though you pretend never to watch it (just you wait for the delights of Lorraine Kelly’s DNA Stories and Behind Bars, which promises to go “behind the scenes of some of America’s most notorious female prison”).

Other highlights to look forward to are: The Rocky Horror Picture Show and The Sound Of Music having their very first outing in HD and Back to the Future, Apollo 13, Unforgiven and Austin Powers 2 having the same treatment. I for one will be tuning in to see Marty McFly in high def.

They’ll be with you in October 2008, with more to follow later in the year.