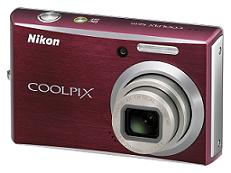 … and their specs aren’t too bad either. The cameras in question are the S560 and the S610. One boasts “the world’s fastest start-up time”, and the other features “the world’s most compact design”. But which one’s which?

In no particular order, it’s the S610 up first. This is the one making claims about speedy start-up times – apparently 0.7 seconds. Whether this is true, or a clever ploy by Nikon to give it added appeal, we don’t know. Only time will tell. It has a right to boast a little bit though – spec-wise. It packs a 10 megapixel resolution, 4x optical zoom, 3200 ISO capabilities and a mighty 3-inch display. It also features Nikon’s Scene Auto Selector, which recognises your surroundings and automatically applies the appropriate scene mode. It’s not too bad on the eye either and comes in brown, silver or deep red.

Next up it’s the S560, the one claiming to have the world’s most compact design (which is strange as the new Nikon S710 boasts the same thing!). Following in the footsteps of the S610, this camera packs 10 megapixels, but has 5x optical zoom with a 2.7-inch screen. It also features something called food mode, which is great for people who love to snap their cakey treats, or the pizza that looked so good it needed to be documented. It basically balances the white adjustment on the LCD monitor for desired colour tones.

Expect both cameras to feature standard compact camera functions such as face detection, red eye removal and smile mode. And expect them all to cost somewhere in the realm of £100-£200 pounds. 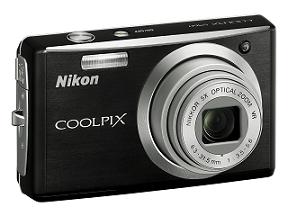