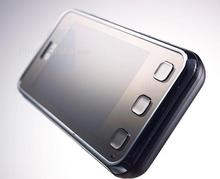 This is the forthcoming KC910, which is due to take over where the Viewty left off. As well as the 8 megapixels, there’s functionality such as smile shutter, manual zoom, as well as a Xenon flash and Schneider-Kreuznach lens.

And you can’t argue with the rest of the specs…

GPS allows you to geo-tag your photos, there’s DivX and XviD support for video playback, video capture at 120fps for slow motion editing, HSDPA, WiFi, and all this comes in the slimmest package out there for an 8 megapixel phone.

I hate to be a party pooper, but what do you reckon the battery life is going to be like on this little number? We’ll find out in October.