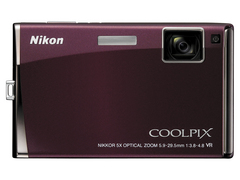 The Nikon S60 provides the user with a fully touchscreen interface. This will be a nightmare for the cack-handed as there are literally two buttons, one to turn it on and one to take images. I can’t imagine what you’ll do when the screen turns into a smudgefest, so delicacy will be needed to keep it pristine… 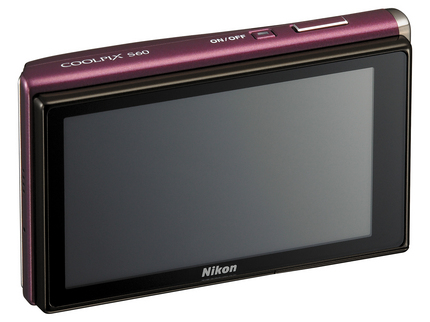 Despite those potential problems the camera itself is a nice piece of kit. It contains a 2.5 inch LCD screen, and all the usual menus are displayed on it, and you navigate with touch controls.

For some reason they’ve included an HDMI port so you can view your snaps on the TV and you also get 10 megapixels packed into the 22mm thick body. It weighs in at 145g, and you get a smile timer, where the shutter only releases at an upturned mouth. There’s a 5x optical zoom-NIKKOR lens for creating images with real clarity and you can store your pics on the measly 20MB of internal memory (I vote for an SD card).

You get 17 scene modes to play with, and VR image stabilisation to create clear fuzz free shots, as well as their super efficient EXPEED image-processing system. I like the Auto blink warning, where culprits who don’t keep their eyes open will be circled in group shots, and I think that would be very useful for large gatherings.

One thought on “Nikon's COOLPIX S60 will be a fingerprint fan”