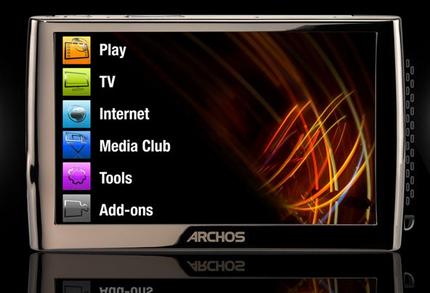 Rejoice my friends; the king of the PMP world is rolling out three new models for you to get your grubby mitts on! I’ve been silently yearning over the Archos 7 ever since it was revealed in all its glory a month ago (at a top secret junket where I was sworn to secrecy) and now it’s here!

Behold the most beautiful device to hit the PMP market in years. It’s sleek, it’s super functional, and as long as it’s not a fingerprint magnet it will become your new best friend. They’re releasing three new Media Tablets, which all come with integrated Wi-Fi, a superscalar microprocessor and a high resolution screen. And no buttons. At all. 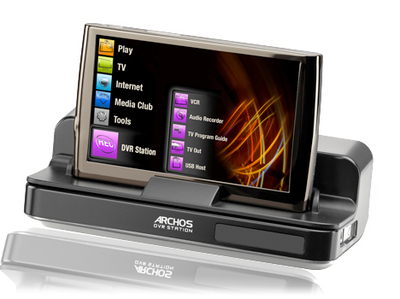 Their best selling 605 only had a few buttons and a touchscreen, but it will soon be obsolete seeing as these new players have NONE. Yes, in a world where the touchscreen is king, they’ve got rid of all the buttons and given you a slimmer device instead, which looks undeniably sexy. If you imagine an iPod Touch fused with an old school Archos you’ll see what I’m getting at.

It has all the features you could want, and you can choose between a 4.8 inch screen (on the 5 and 5g model) or a 7 incher (on the Archos 7). The TFT screens are capable of playing Hi Definition ( with a plug-in) and you also get some brand-spanking new features.

They’ve added an email application to their portfolio of options, as you can now set up IMAP or POP services like you would with a Blackberry. Any attachments can be opened and stored as well (though you may have to download compatible plug ins).

The Archos 5g also uses 3.5G technology to enjoy a permanent connection to the Web for super fast browsing and downloading. You can still use 3.5G with the other models, you just need to purchase the Mini Dock and plug-in (out later this year).

The storage is quite impressive as well, with up to 320GB of memory in the Archos 7. That does come at a price though, as you’ll be shelling out £440 for that, with only a slight drop in price at £360 for the 160GB. Add to that the expense of a docking station, GPS receiver, and all the plug-ins you’ll need and you could be looking at around half a grand.

You do get a HDMI output though, if that makes it more palatable. Perhaps £279 for the 60GB Archos 5 is more in your price range? Either way, despite the price and the annoyance of paying for plug-ins, it looks like Archos may have a winner.

Movies, pictures, Music, email, Internet and GPS.. what more could you want?

Available from £279 at Archos in August