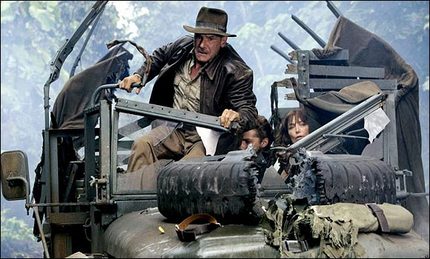 This weekend I was probably one of the few people who didn’t see Harrison Ford’s latest epic adventure. There seem to be a lot of bad and positive reviews, so perhaps Ol’ Harrison could use a few suggestions on the kit he needs to keep on top form.

Obviously Ford is getting on a little, so I’d imagine some stair climbing adventures as opposed to swinging recklessly from trees; and this lovely looking whip would be more of a prop than an everyday tool. However if Harrison wants to prove he’s still got it, this whip turns on to vibrate as it hits, leaving all his impressionable female followers with some rather interesting feelings…

We don’t want dear old Indy getting lost across the Aztec desert now do we? This Sat Nav device should hopefully keep him locked on his target, with the handy red line across the window meaning he won’t get to lost as he navigates the perilous rails. keeping the screen clear also gives him full access to shot any bad guys who are chasing him as well. 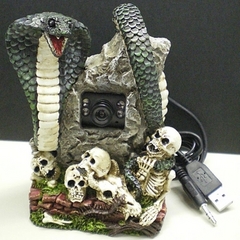 OK, this probably isn’t quite the type of skull our Indy is looking for, but I bet it’s packed with a lot more features and a money back guarantee to boot. Even without it, it still adds a little bit of adventurous mystique, perfect for that live chat on the go.

As Harrison ages he can no longer leap over buildings in a single bound (or was that Superman?) so he’ll be thankful for the Flybar, which lets you jump 4 foot in the air, and give him the coolness factor of a fifteen year old (without the safety helmet obviously). How did he ever live without it?

Things have moved on a bit since the last film (Ford’s hairline for one) and it might help him to digitize all his old negatives. This device lets you scan all your pictures onto CD or a memory card with an easy loading machine, and will help Indy index any missing artefact’s.