As Ryan Reynolds joins Tumblr and new owner Elon Musk bans parody accounts, we look at some alternatives to Twitter including Mastodon and Bluesky…

A new study from Financial-World.org has revealed the emerging social media platforms that could soon replace Twitter, as Elon Musk continues to cause controversy among users.

Using Google Trends data, the experts were able to analyze which new social platforms have received the biggest spikes in searches over the last 30 days.

This week, Ryan Reynolds made a public move to Tumblr which ironically made him trend on Twitter with 33.5K hashtags as of Nov 8.

The celebrity actor isn’t the only one making moves, as data shows searches for ‘Twitter Alternatives’ has increased by 258% globally in the last 30 days.

But where are social media users moving to? And which platforms are set to become the next big one to replace Twitter?

In the last 30 days, searches for Mastodon have skyrocketed 380.76% globally, reaching an all-time high from the last 12 months.

The decentralized social network launched six years ago. However, it’s been reported that over 489,003 users have signed up since Oct 27, taking the total number of users to over 1 million. 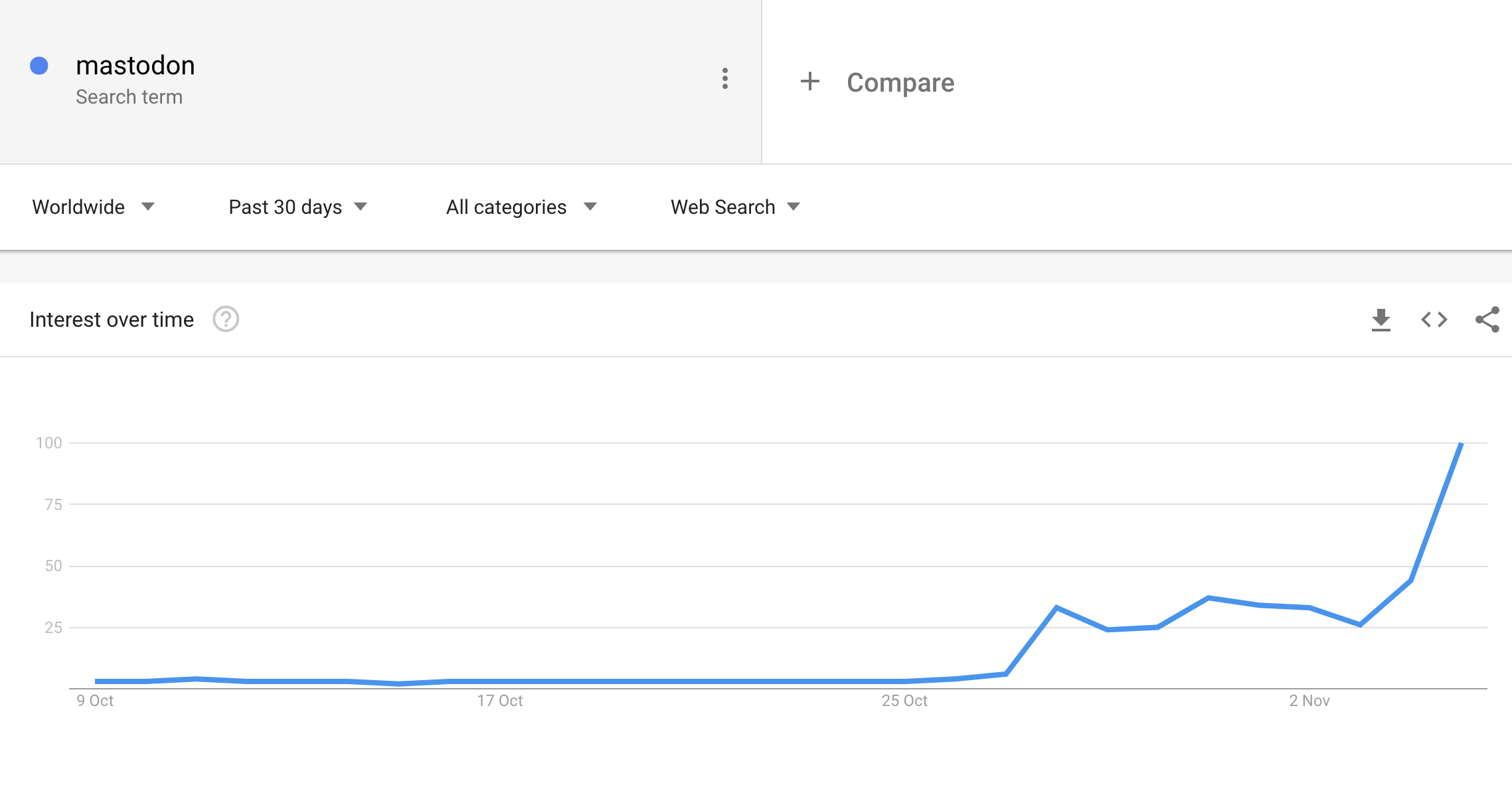 Former Twitter CEO Jack Dorsey is set to launch Bluesky in the coming months, and it seems social media users can’t wait to jump ship as searches for the platform increased by 207.14% in the last 30 days. There are also over 30,000 on the waitlist. Searches for the platform that promises ‘no trolls’ are also soaring this month (159.06%).

The platform also bans several countries, such as Russia, China, Iran, North Korea, Pakistan, and Syria, for being “origin points” for bots. On October 28, Director and Producer Ken Olin publicly announced that he was moving to Tribel Social – which led to a staggering 400% increase in searches for the emerging social network on that date.

Controversially, the platform has already banned Elon Musk, Donald Trump, and Kanye West stating: “Unlike Musk’s Twitter, we don’t put ad revenue over decency & truth. Purveyors of racism and pro-Putin propaganda are not welcome on Tribel, our pro-democracy Twitter alternative.” Cohost is another new social network that’s exploding right now, with global searches for the platform increasing by 146.91% in the last 30 days.

The platform is still in the beta phase. However, anyone can sign up to explore the features. Comments a spokesperson from Financial-world.org:

“In recent weeks, the controversy around Elon Musk’s plans for Twitter has continued to grow, with more celebrities and public figures publicly declaring they will move away from the platform. As they have such a huge influence over society it’s no surprise to see such a huge increase in Google searches for Twitter alternatives.

“2023 will be a very interesting year for social media, and from our study, it’s clear that the likes of Mastodon, Tribel, and Bluesky are set to be the next big internet trends.”