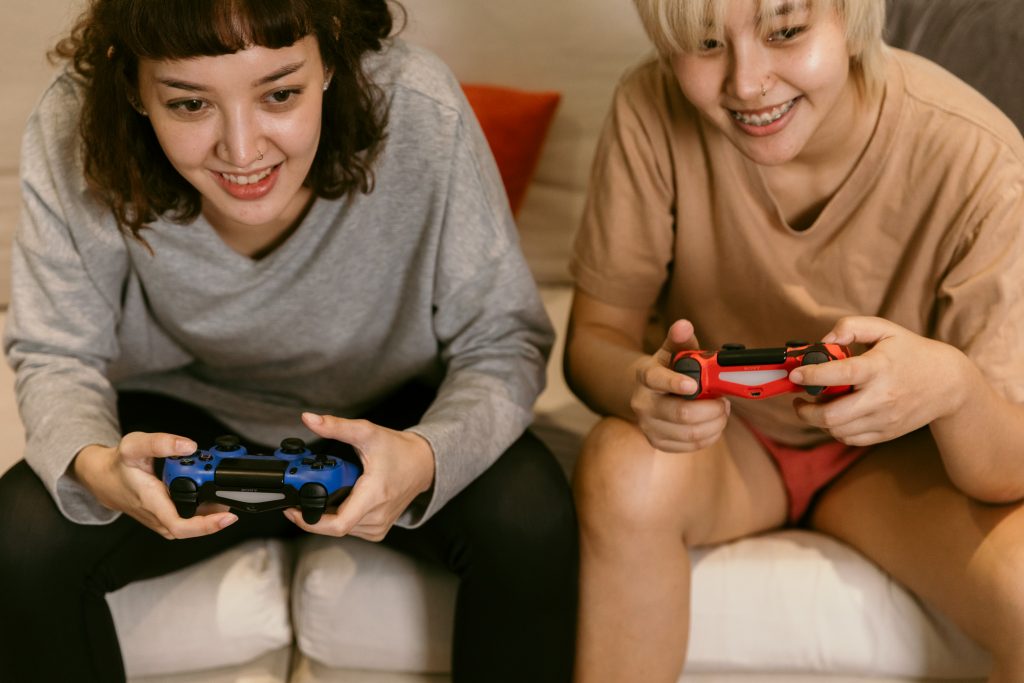 As technology becomes more advanced, the way we play games and interact with one another is evolving….

Technology is changing our lives, from the way we interact with one another via social media to the way we work using online tools and apps.

One area that is moving extremely quickly is gaming. Not so long ago if you wanted to play a game you needed to load a disc into a console, such as a PlayStation or X-Box.

However, with the advent of smartphones and faster home broadband connections you no longer even have to buy software and special devices to enjoy the latest games. Take Google Stadia. A new cloud-based gaming platform, it doesn’t require a console at all.

Instead, users can play on a TV using a Chromecast Ultra stick, on a laptop through the Chrome web browser, on a web tablet or a smartphone such as Google Pixel 5 smartphone.

Online games that are played either partially or entirely online – are becoming increasingly popular. These can range from simply seeing where you are ranked on a leaderboard to Massively Multiplayer Online Games (MMOs or MMOGs) such as World of Warcraft as well as ‘battle royale’ games such as the incredibly popular Fortnite.

[Undoubtedly one sector of online gaming that is becoming increasingly popular is gambling. Rather than having to get dressed up to visit a real casino, it’s now possible to have the same experience using a virtual or Internet casino.

Statistics from the European Betting and Gaming Association show that online gambling had a 20.7% share of the total EU gambling market activity in 2017 while 79.3% was land-based, including lotteries, casinos and bookmaker shops. Furthermore, the online share of the gambling market is expected to grow to 24.9% during 2020.

Various types of online gambling services can be found. These include virtual casino games where the outcome of each game is dependent on the data produced by a pseudorandom number generator (PRNG) to live casino games where a human dealer runs the game in real-time from a casino table which can be viewed via a live streaming video link. Some sites even offer a Cashback Bonus.

Augmented reality refers to the digital manipulation of the world around you. Using your phone’s display and camera capabilities, players can add items to the real-life environment in which they are located.

Many modern smartphones already boast this technology, although it is presently used in a limited way. Google also launched its augmented reality headset, Google Glass, which offered integration with apps like Maps, but this was not a major success. Experts predict that augmented reality will evolve to become a part of the broader tech picture.

In casino terms, the technology could be used to plot objects and furniture from a real-life casino as players enjoy their favourite games. For example, roulette players could spin a digital wheel in front of them or have cards dealt virtually onto the table at which they are sitting – with player avatars sitting on the seats around them.

Finally, one technology which is expected to have a massive impact ongaming and gambling over the next few years is VR (Virtual Reality). It promises a whole new experience to the consumer, immersing him or herself in a realistic casino environment and enabling participants to interact with others around them too.

In order to make the immersion as realistic as possible, gamers need to wear a 3D VR headset with some casinos using VR Gloves too. These give you the impression of being right there in the middle of the action while gloves give you control over your hands. VR casinos also incorporate live dealers created using camera shots of real, human dealers – not simulations.

Certainly, gaming has come a long way since Nokia put Snake on its iconic 3310 mobile. Over the next few years we will see even more changes as technology opens up yet more possibilities for gamers.