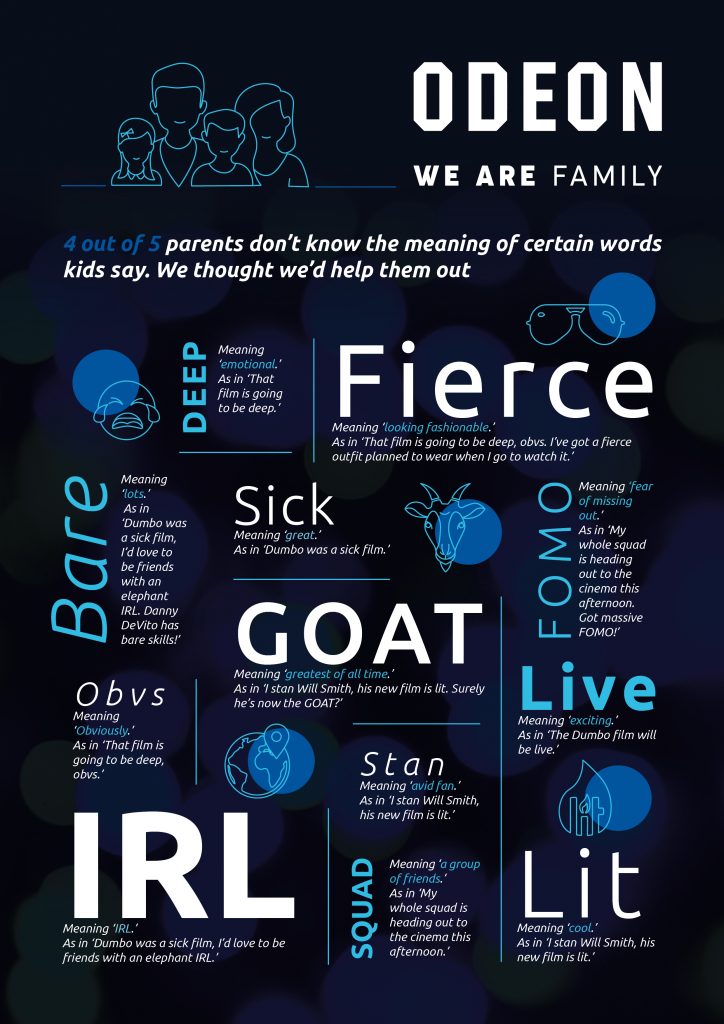 Nearly 9/10 (86 percent) of British parents do not understand their children’s modern day slang, new research from ODEON Cinemas has revealed.

Words such as ‘sick’, ‘savage’ and ‘squad’ are among those baffling British parents, whilst acronyms that stem from social media including IRL (in real life), AFS (away from screen) and BFF (best friend forever) are also causing parents headaches.

Parents say their children are using up to three slang words per day they do not know the meaning of.

ODEON commissioned the research to develop a new training programme for its cinema colleagues, specifically designed to help make the cinema-going experience as stress free for families as possible. As part of this, it has trained its colleagues on kids slang to help them better communicate with child guests.

The top five kids slang words were revealed to be Obvs meaning ‘obviously’ (53%), Sick meaning something great (49%), Awks meaning ‘awkward’ (41%), Squad meaning ‘a group of friends’ (26%) and Savage meaning someone who has done something considered bold or feisty (24%).

The research also looked into the misinterpretation parents had of particular words.

Some of the most common included believing lit to mean literally, when in modern day slang it refers to something that was awesome; Safe to mean secure, when in kids slang it refers to being in agreement with something; AFS to mean ‘always forever seriously’ when it is actually the acronym for ‘Away From Screen’ and used when referring to someone you can’t get a hold of; and stan to mean standard when it is in fact the opposite and refers to a huge fan.

“As a parent of a 13 and 10-year old, I know only too well how language is evolving faster than ever and our colleagues notice it day-in day-out when they’re chatting to families at our cinemas. There’s nothing better than debriefing a film after watching it all together, hopefully this will help parents understand their kids better and enjoy those precious family moments.”