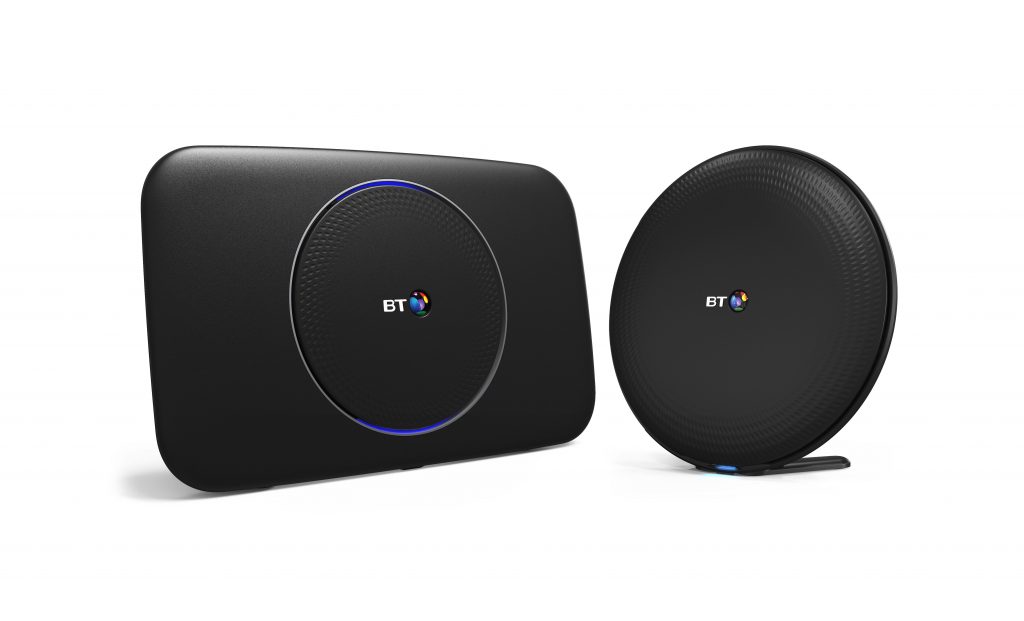 Fed up of not being able to get WiFi throughout your home? BT has introduced what it claims to be the only service that guarantees ‘wall to wall’ coverage in every room of the house. Called Complete WiFi, it does this by using special WiFi discs that integrate with the main hub and are easy to set up via a smartphone app.

It’s fair to say that broadband companies generally have a bad reputation with customers. According to the latest Which? report many of the top service providers are still failing to impress with TalkTalk and Sky receiving the lowest customer service ratings of them all. However, BT also scored poorly with many customers unhappy about the provider’s value for money. What’s more, 20% of households claims to have experienced problems with very slow speeds or connection dropouts.

BT’s Complete WiFi solution aims to address some of these problems. Not only does it includes the company’s latest high power router (the Smart Hub 2), it also comes with a special WiFi Disc that can be installed in a part of the house where coverage is poor.

If this doesn’t do the trick then you can request up to two more discs free of charge. And if that still doesn’t work then BT will give you £20 back. Unlike traditional WiFi signal boosters/extenders, BT’s WiFi discs are designed to integrate on the same network as the main hub and are very easy to set up – more of that later.

It’s been a little while since I’ve had BT’s broadband service in my home (I’ve been with TalkTalk for the last two years which wasn’t as bad as I was expecting although signal dropouts and faults seemed more commonplace). Clearly a lot has changed in this time. In particular, set up these days is much easier than it used to be with BT thanks in large part to the My BT app (Android and iOS).

This literally walks you through every stage of the set up process, from plugging in the router to setting up the WiFi disc as well as the YouView compatible set-top box (you need this for watching and recording digital channels and also for viewing streaming services, such as BT Sport – see Complete Package section.)

After installation, the app also becomes a useful tool for checking your set up (including signal strength), accessing latest bills and finding out whether there are any service problems in your area. You can also use it to restart your hub and to test the speed of your connection (although for some reason I couldn’t get BT’s speed test to work on my app).

BT claims that average download speed for the Superfast Fibre Plus service which I opted for is 67Mb/s while average upload speed is 18Mb/s. However, in my north London location the closest I could ever get using WiFi on my Apple laptop right next to the router at 4am were speeds of 43Mb/s and 17Mb/s upload (taken using Broadband Speedchecker service). In more remote parts of the house it was half this speed. 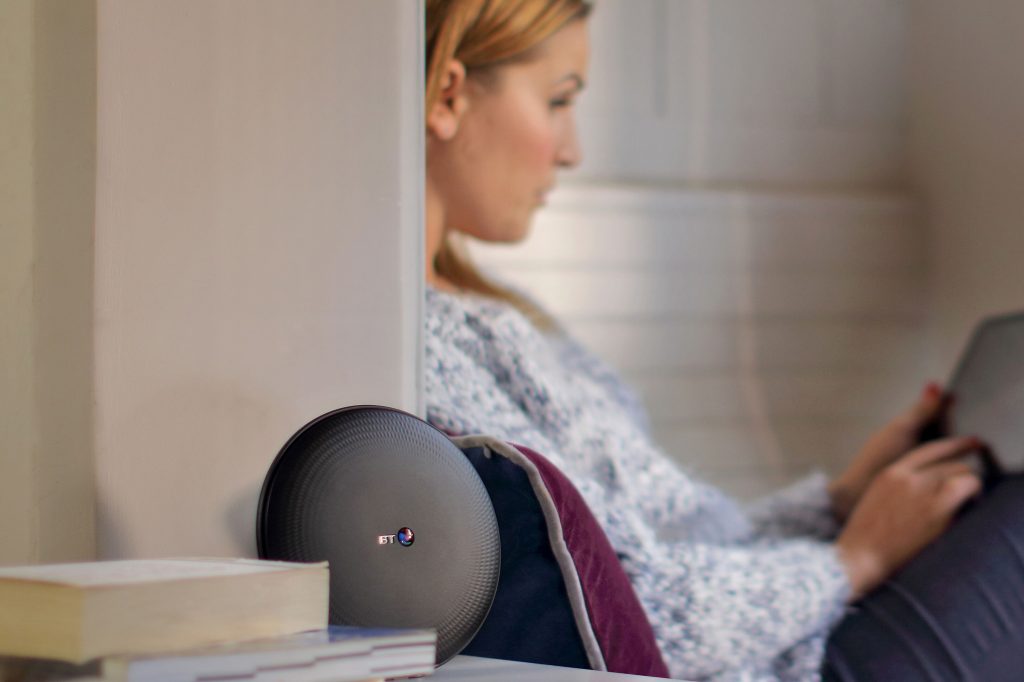 As with most BT routers or hubs, the latest Smart Hub 2 is a sleek upright black device, devoid of any external antennas (unlike my previous Netgear router which had three unsightly antennas which kept falling off). Round the back is a broadband port that connects to the master socket in the house, a phone port for digital voice customers and four Gigabit Ethernet ports.

Personally I would like a lot more Ethernet ports for all of my smart home devices – including security cameras, smart heating systems etc – which I need to connect. However, most seem to have just four. In addition there’s a small power button in the corner, a WPS button to connect your devices to the internet as well as details of the hub’s wireless settings. Usefully, these settings – including the all important WiFi password – are printed on a removable piece of card so you can easily share it with friends and family when they come round.

Setting up the device is very straightforward. Just plug it in to the home’s master socket using the broadband cable and wait for the top and bottom lights on the device’s front circular panel to turn from green to orange and then finally to blue. If they turn any other colour, such as purple or red, then there is a problem somewhere and you may either need to press your hub’s factory reset button using a paperclip, or contact BT.

The only slight problem I had was that I needed to reconfigure my various security cameras (including Nest, Hive and Blink outdoor cameras) when I connected up the new router. However, the Hive central heating/hot water control system continued to work uninterrupted.

Once you’ve set up the hub/router, the app should then ask you to set up the WiFi disc. First of all this needs to be plugged into the back of the router using the Ethernet cable provided. Then once this is done it needs to be moved to a part of the house where the WiFi signal is very poor. I chose the kitchen – a new build area at the back of the house – where I’ve struggled to get decent WiFi from the router which is located at the front of the property near the front door.

As with the hub/router, if the WiFi disc is getting a decent signal from the router then a blue light will appear on the bottom of the device. However, if the light is orange (weak signal), then you may need to either move it or get in touch with BT to get another disc.

I chose to stand the disc on a cabinet near to where I have an Amazon Echo smart speaker to ensure the signal is strong enough for Alexa to understand basic instructions (there’s nothing more infuriating than her message “I’m having difficulty understanding right now, please try again later”). However, alternatively the WiFi disc can be attached to the wall using a large nail or screw.

Completing BT’s Complete WiFi solution is the digital set-top box. Manufactured by Humax, this compact YouView compatible unit is available in either two versions, either with or without a hard drive. I opted for the version with a 500GB hard drive – the Humax DTR-T2100 – which would normally set you back around £125 if you were buying it ‘off the shelf’, rather than as part of a subscription deal.

You can use this box to record TV programmes directly (BT claims it can record up to 300 hours of TV) as well as to record remotely using your smartphone, either via the YouView or the BT TV app. Simply pair your phone with the set top box via the app and scroll through the listings to find programmes you want to record (either individual programmes or series).

In addition, the BT TV app can be used for watching BT programmes on your smartphone or tablet (though you will still need your set top box for watching regular digital terrestrial channels such as BBC, ITV, Channel 4 etc). I subscribed to BT Sport for the Champions League Football so I can easily watch this through my smartphone. However I’m also able to watch additional live content from other channels including Comedy Central, MTV, National Geographic and Gold on a smart device.

Although I have been using YouView boxes for a number of years, this latest box is much better than the previous set top box that I used with my TalkTalk service. Not only is it much smaller than my previous unit, it’s also much responsive when changing channels, recording etc. Round the back are several connections including Scart (remember those) and an HDMI socket for higher quality connections to your TV as well as both analogue (phono) and digital audio (SPDIF) outputs for connection to HiFi/surround sound system. Although regular definition BT Sport isn’t that great in terms of picture quality, you really, really notice the difference if you subscribe to the HD version and use the HDMI connection.

Unlike most smart TVs and some set top boxes, the Humax DTR-T2100 does require a wired Ethernet, rather than wireless connection to watch internet delivered content such as BT Sport or on demand services including programmes on the BBC iPlayer, Netflix or Amazon Prime Video. 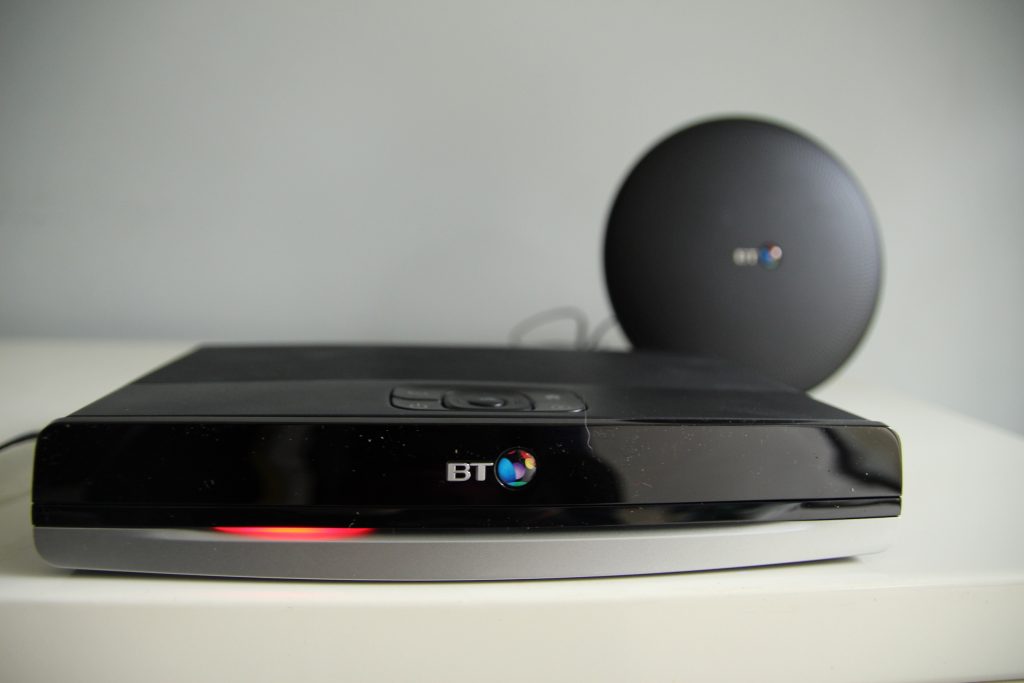 That’s a little bit of a pain in the backside if your set top box is the other side of the room or even in a different room to the hub/router. However, I get round this by using a Powerline socket which plugs into the wall and connects to the hub via the mains electricity circuit, rather than having to trail additional cable round the room. Another slight bugbear is that the set-top box can take a little time to switch on, especially in Energy Saver mode when it can take several minutes.

On the plus side, I am finding that video content streamed from the internet is generally much more stable – and less likely to drop out – than using my wireless smart TV. Even BT Sport and Sky Sports are  less liable to break up at an important moment of a football match, something that was a massive problem when I subscribed to these services via TalkTalk. Let’s hope this continues.

Broadband providers have quite rightly attracted criticism from users for expensive and unreliable connections as well as poor customer service in the past. And I can’t see this changing over night. However, BT’s Complete WiFi solutions is a very, very good attempt at addressing some of the issues, particularly around poor coverage within the home. In my case I’m now getting much better coverage in my kitchen than I was able to in the past, even when I was using a WiFi extender, thanks largely to the new BT WiFi disc. Nor is this the only benefit of the service. Undoubtedly, various BT apps have helped the experience too. The My BT app guides you through set up in a really straightforward way as well as allowing you to restart your hub, check for any problems in your area and monitor your invoices. Furthermore, using the BT Sport and BT TV apps you can watch digitally streamed content on your smartphone, something that still isn’t possible with many broadband providers. 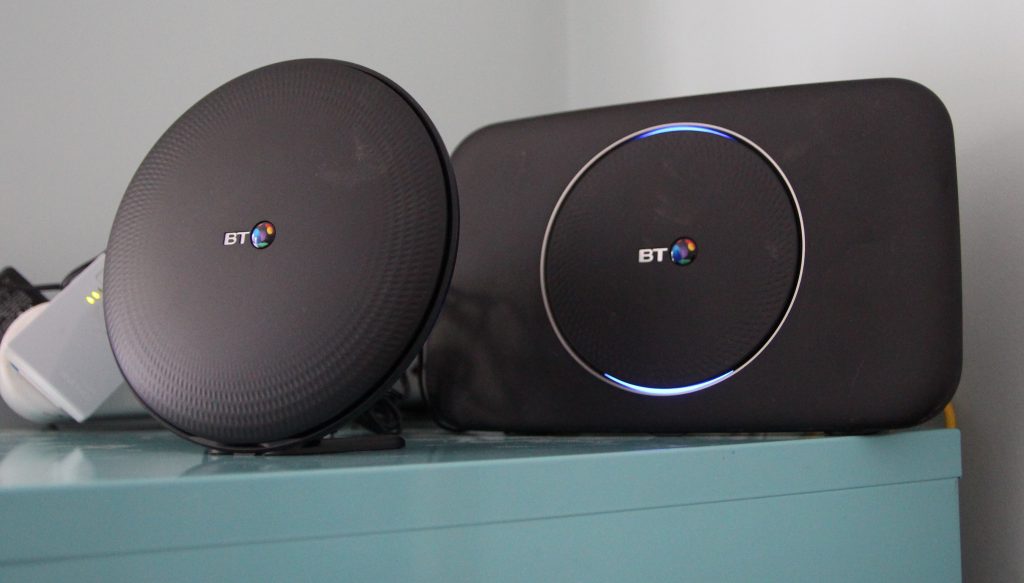