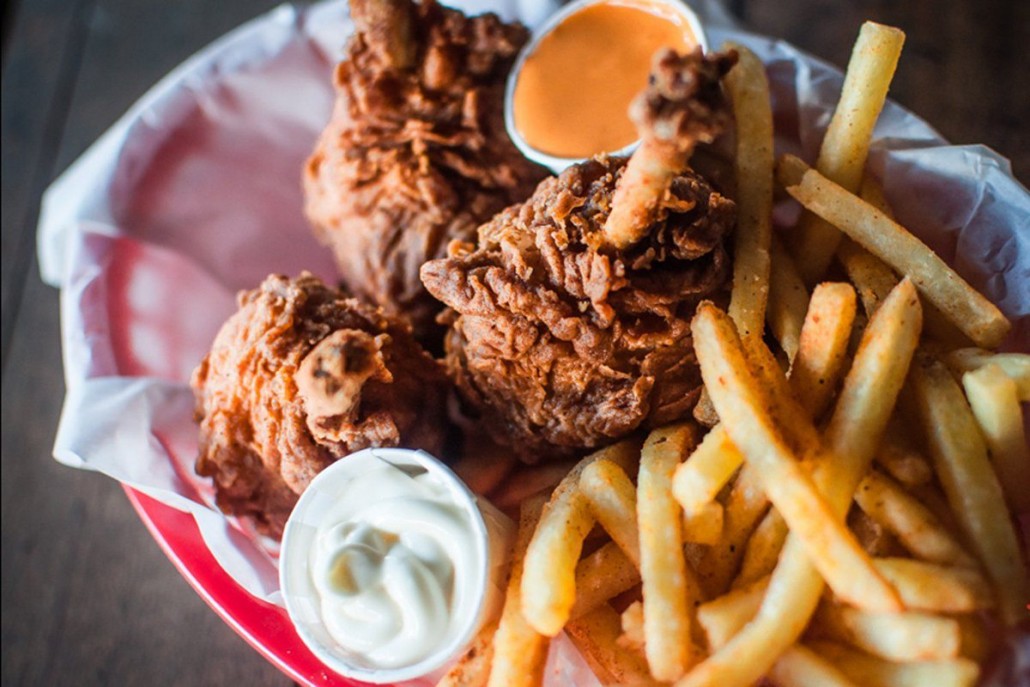 London has always been one of the best cities in the world to be a vegetarian. But until recently it was lagging behind Berlin, Sydney and Portland to name just three, when it came to vegan food options.

Not any more though as the last few years has seen the city undergo a vegan revolution with some inspired new restaurants and stalls and some old favourites ditching the diary and going plant only.

Here then is a a selection of some of the best places to buy vegan food in the capital. Which ones did we miss?

Club Mexicana – Inspired by the groundbreaking food they sampled in Australia, Meirel and Lois began selling their own vegan fare under the Club Mexicana moniker about five years ago. Since then their journey has involved sessions in street markets like Kerb alongside residencies in bars and pubs. Now you will find Club Mexicana permanently stationed in the Spread Eagle pub in Homerton and stalls in Camden and Shoreditch.

The menu has evolved too. The sublime Jackfruit Tacos, which to this day remains my favourite vegan dish, are as popular as ever, but you can also chomp on Beer Battered Fries and To-fish Tacos. The first place to take any vegan visiting the capitol! 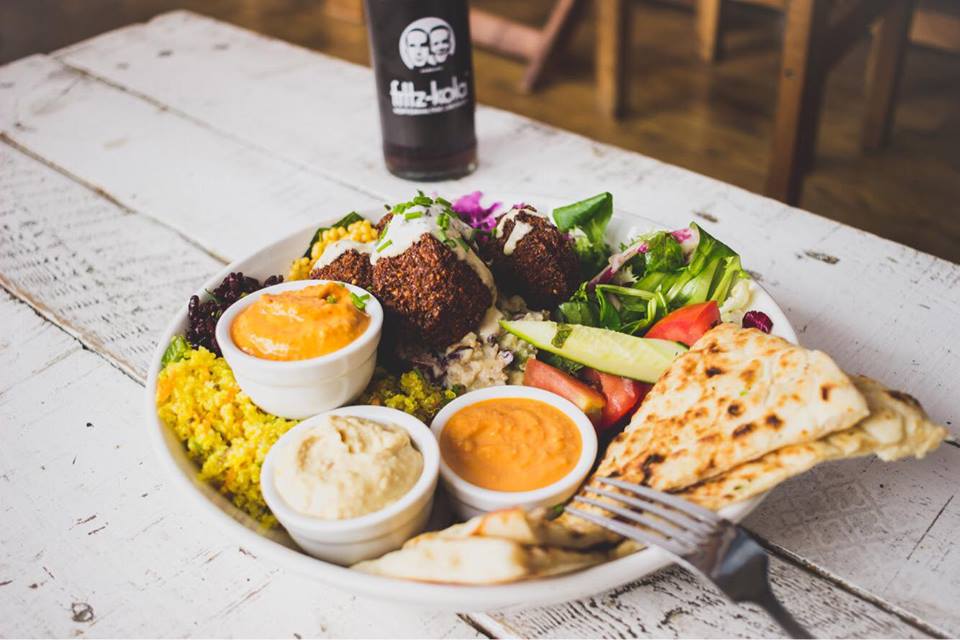 The Black Cat – Another London vegan institution The Black Cat has been serving fantastic plant based food for several years now. Along the way some of the most imaginative chefs in the capital’s veganosphere have perfected their art in the BC kitchen. On most days it offers an intriguing mix of super healthy looking salads and imaginative specials alongside soya-powered vegan versions of staples like Lasagna and Shepherd’s Pie. The Hackney based cafe is always busy, especially at the weekend, so if you are going there for lunch get there early. 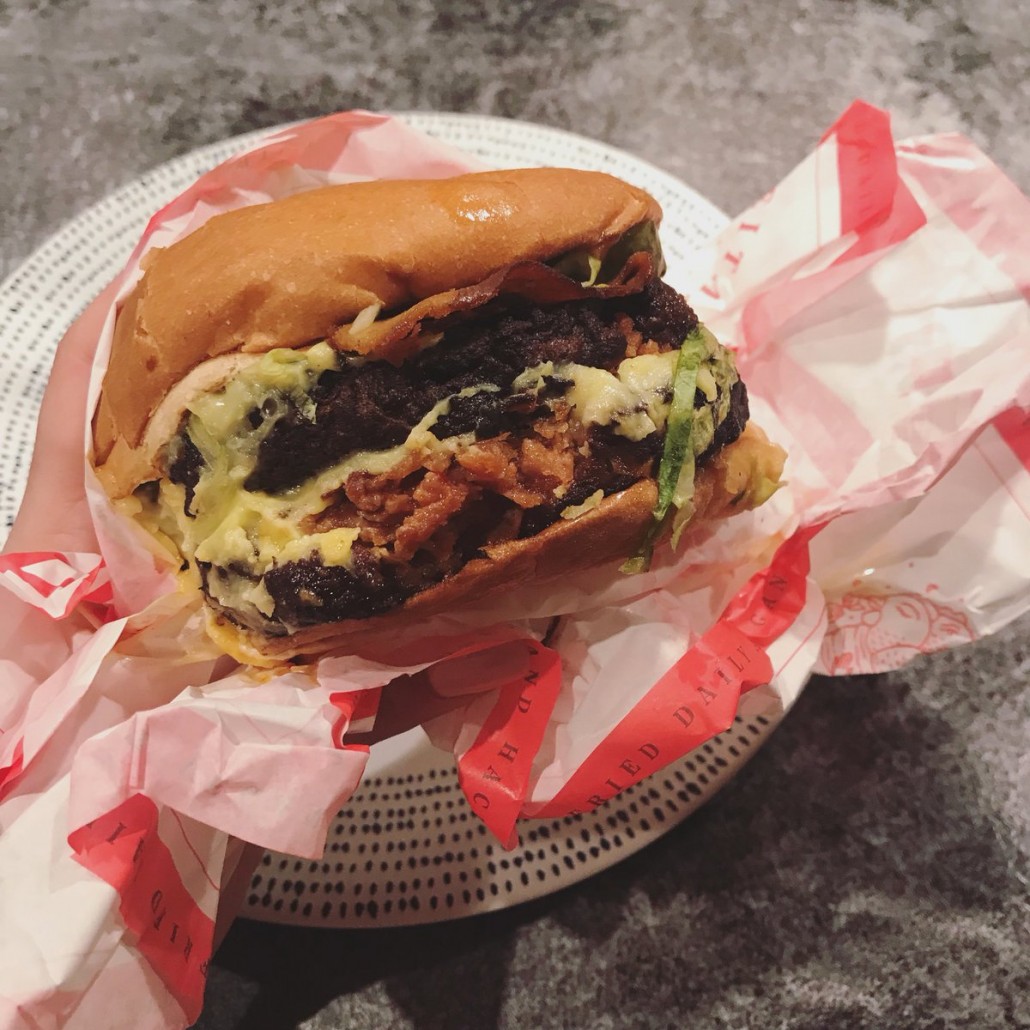 Temple of Seitan – This place caused a minor media storm when it opened in January 2017. It was amazing to see people queuing round the block and waiting an hour for their food – ironically all in clear sight of the halal butchers a couple of doors down. Temple, which is now available in three places across London, is basically a love letter to KFC, though obviously a KFC minus the chicken. Imagine Colonel Sanders swapping the chicken for the wheat based substitute Seitan and you get the picture., Cheese, Chilies, Mayo – all of which are vegan make the sandwiches utterly addictive, Oh and they do possibly the best vegan Mac’n’Cheese in London.

CookDaily – Prof Green is a fan, and apparently JME has been known to pop in. They certainly have good taste for CookDaily in BoxPark in Shoreditch and Croydon too, delivers a sublime selection of largely Asian based food. One of the best things is that chef King Cook never shirks on the veggies. Sure you can get a version of Chicken and Mushroom pie, but you’ll be picking your way through super tasty Broccoli and Peppers to get to the Soya Chick’n. The High Grade dish, which is made from addictive sweet and sour barbecue sauce is perhaps CookDaily’s signature, but if you have imbibed a little too much the night before then the English Breakfast has your name on it. 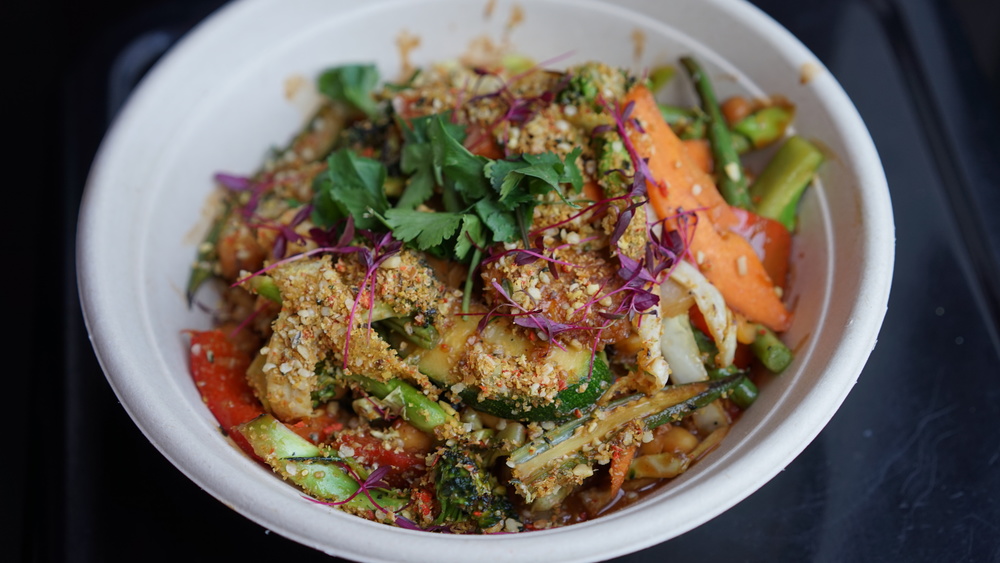 Manna – At the other end of the spectrum Manna is a long standing vegetarian restaurant which quietly went fully vegan a few years back. It is tucked away in a quiet part of Primrose Hill and not surprisingly given its location, is fairly pricey. If you don’t have a celebration coming soon go at mid-day. Manna has an amazing and affordable lunchtime menu. The Maki Rolls are sublime and the Raw Tacos are a perfect light lunch.

Planet Organic –  Yep I know it is a big chain, but if you are feeling hungry and anywhere near one it is well worth checking out their lunchtime offering. For a measly £4.50 you get to fill a generous sized card dish with a selection of hot and cold dishes the majority of which are vegan The Dhal and Paella are exceptional and the salad offerings really tasty. 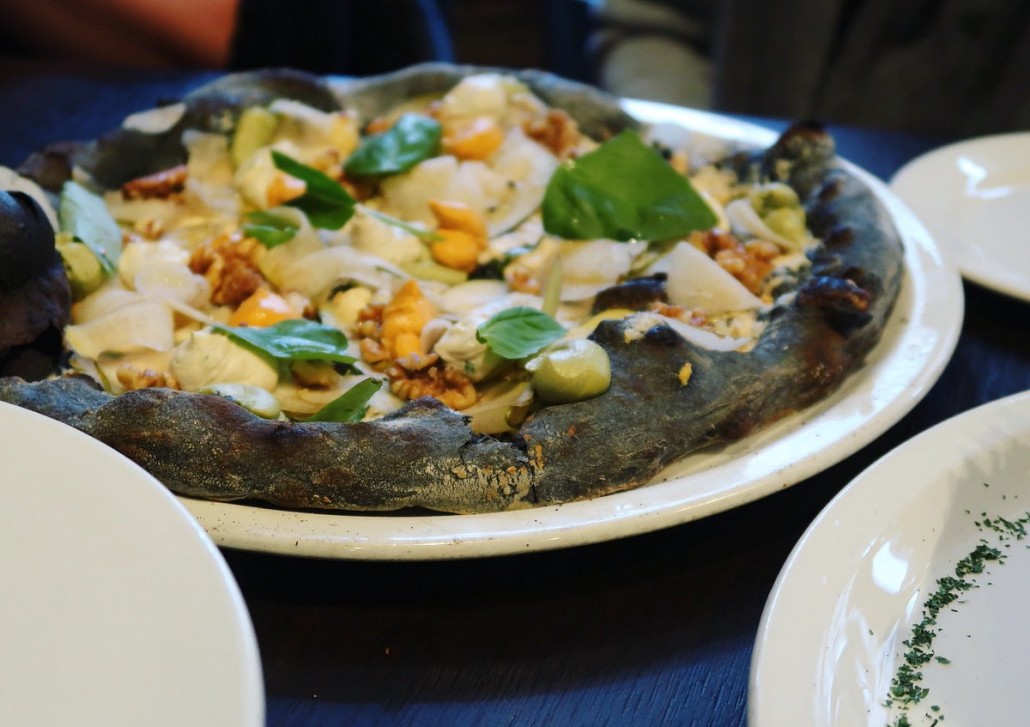 Fed By Water – London’s premier vegan pizza joint is one of two must visits for vegans in Dalston. The pizzas are wonderfully light and crispy and teeming with toppings, and the homemade vegan cheese is both tasty and runny. The signature dish though is Spaghetti Carbonara which replaces the meat with crispy Seitan 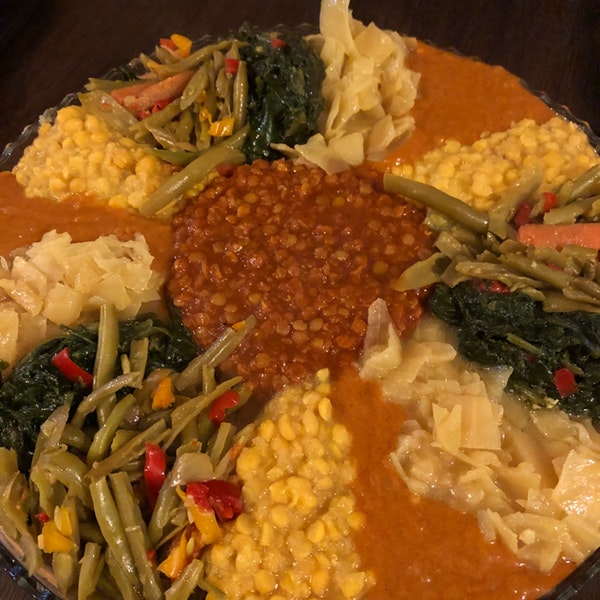 Andu’s  – This is a tiny Ethiopian restaurant on Kingsland Road Dalston, which went vegan for a couple of years ago. There isn’t a menu, instead  you just get to sample a variety of vegan Ethiopian dishes accompanied by the gorgeously light and savoury tasting Injera bread. The Misir Wot – think dark lentils with lashings of garlic – is one of the tastiest things you will ever eat. It’s a lot of food for a very cheap £7. If you get addicted also check out Kokeb near Cally Road tube station – which also has a great selection of vegan options.

Warren Street Health Food Centre –  Any veggie who has ever worked in Fitzrovia swears by this place. For about two decades the charming family that runs it dolled out wonderful vegan and veggie curries and sandwiches. Then a while ago they shifted their business to focus on just health food products. The wonderful news is that the curries and sandwiches are back. They are cheap, filling but hugely tasty. Their vegan take on Dal Makhani is the one to opt for. 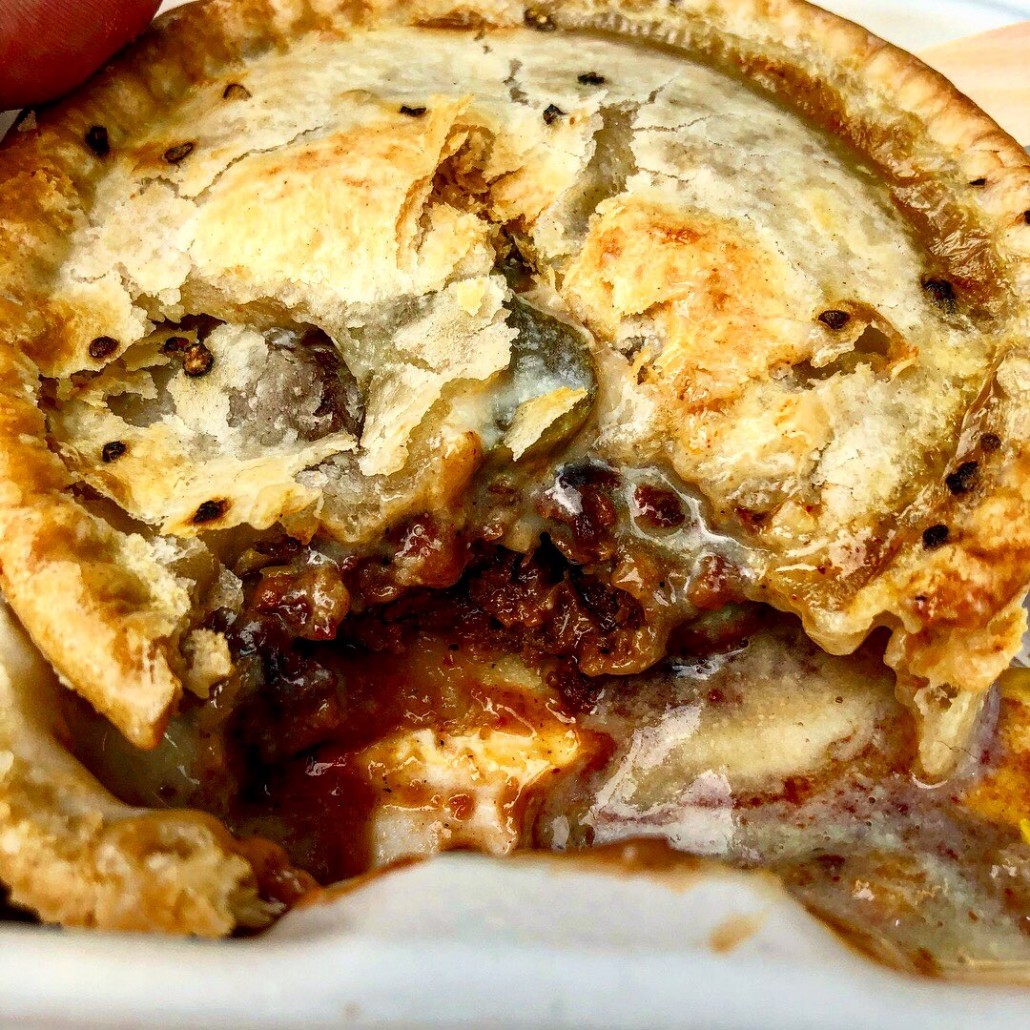 Young Vegans – These purveyors of stunning vegan pies took the plunge last year and secured a permanent residency in Camden Market. I am a huge fan of their Steak and Ale and Breakfast pies. The mash is delish too.

Chloe’s – The new kid on the block Chloe’s has gained a massive reputation in the US for its huge selection of vegan goodies and  especially its award winning burgers. You can find out for yourself how good they are now by visting their recently opened Covent Garden flagship. Be prepared to queue though.

Cookies And Scream – And if you possess a sweet tooth this Holloway Road joint is the place for you. Brilliant soy shakes, scrumptious cookies and lots of other vegan treats.

Hackney Downs Vegan Market – The place to go on`a Saturday. Curated by Sean, aka Fat Gay Vegan, it hosts a wonderful selection of stalls selling not just fast food, but also vegan drinks, cheese and beauty products. Look out especially for Cafe So Vegan and the more-ish burgers of Big V.

And if you happen to be in Broadway Market, London Fields on a Saturday they have a great vegan market there too. 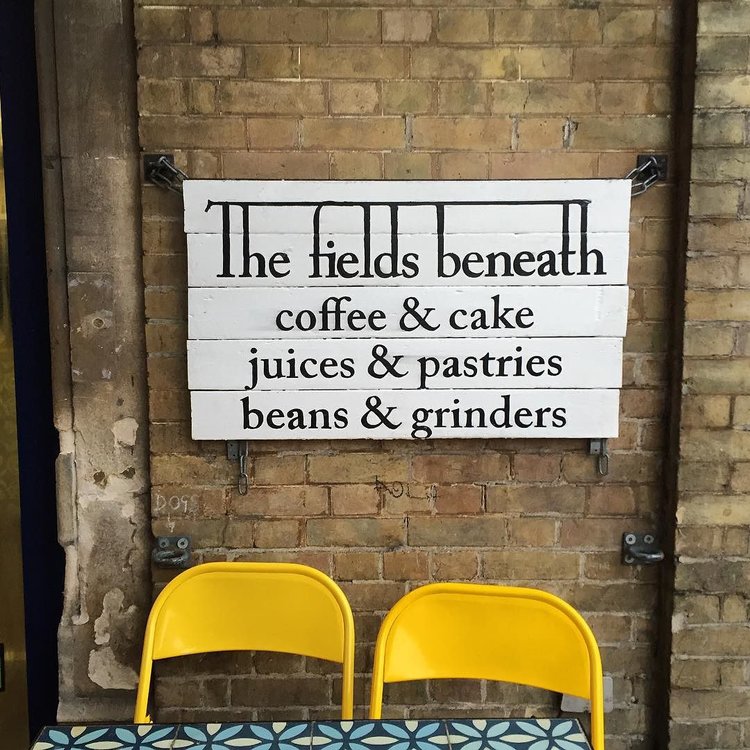 Also try – sublime vegan cod and chips from Sutton and Sons an old school chippy on Stoke Newington High Street (though alas not yet in their other shops). Unlike most of their rivals they replace Cod not with Seaweed wrapped Tofu but with Banana Blossom, an exotic and imaginative substitute which in my opinion works much better. There are lots of vegan options and the chips are probably the best in North London.

For breakfast you can’t get much better than The Fields Beneath in Kentish Town. Named after a book about the part of London the cafe that is underneath the Kentish Town west railway station, pairs exquisite coffee with wonderful vegan croissants, including some very imaginative savoury ones. If you are in N16 Bodega 50 is a wonderful cafe that is 90% vegan and boasts some great sandwiches.

And to finish your evening What The Pitta has wonderful vegan kebabs, which are huge, and come with generous portions of salad and killer chilli sauce.