With summer now upon us, you’ll be heading to holidays and festivals, where music is a must. There are so many Bluetooth speakers claiming to be portable, but we’ve found five that actually are, and they also all do have surprisingly big sound, so you could use them all year round for any party you throw.

All five of these Bluetooth speakers can be used as a speakerphone in the office too, but our main problem with this was, if it’s your personal phone, or if you’re using it at a party, you don’t want the music to be cut off and for everyone to hear your phone call. Having to turn the speaker off every time I had a call was very annoying.

Aside from that, here are our five favourite Bluetooth speakers to spend the summer (and rest of the year) with. Hayley Minn reports 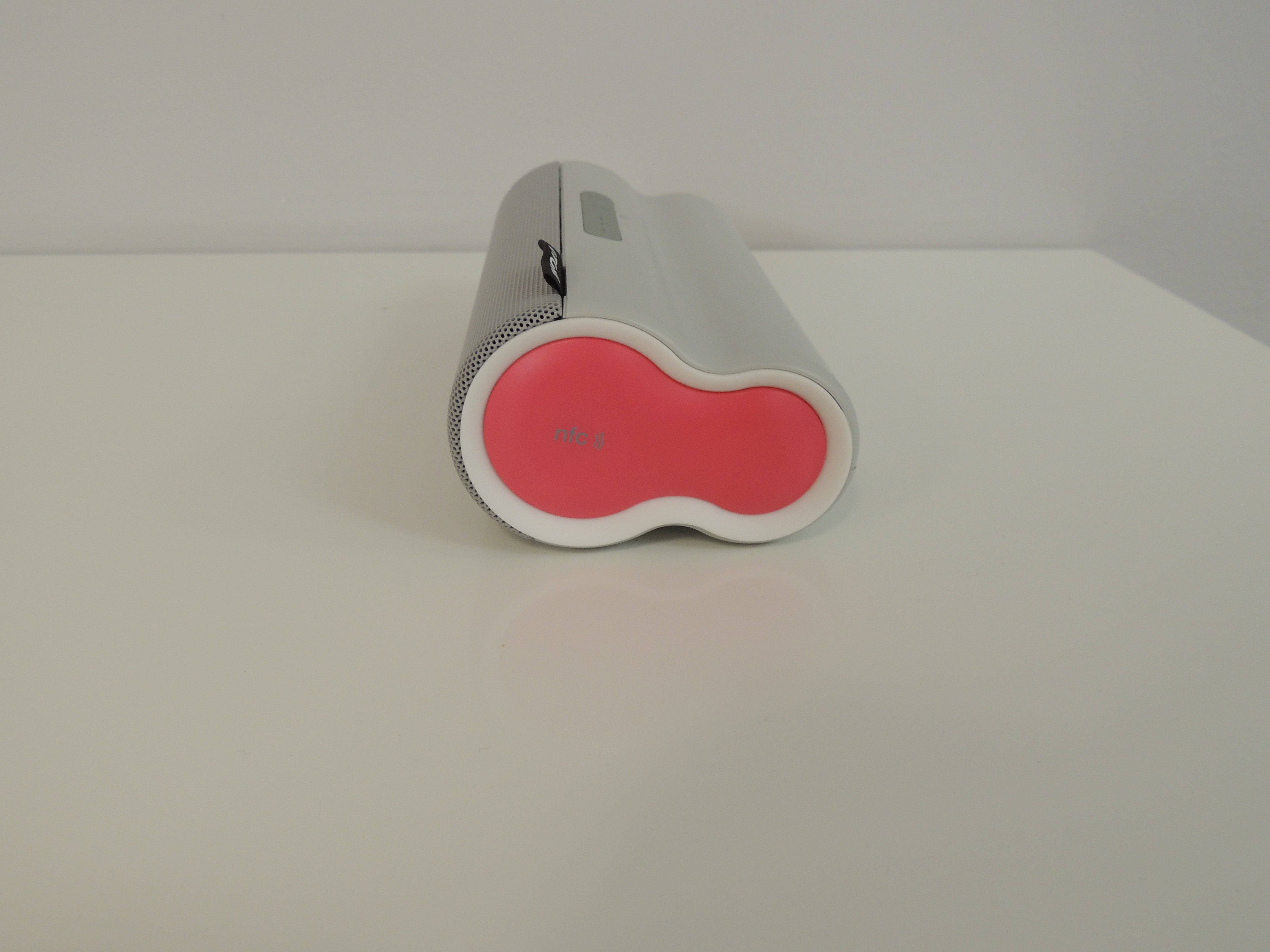 Actually listening to a Bluetooth speaker on full blast is quite hard to do in an office, without getting glares from everyone trying to work around you. Luckily, OTONE Audio had the right idea, and took us in a hummer limo around the block to blast the Blufiniti speaker as loud as is physically possible, without annoying anyone!

The sound was great, really clear at even the highest levels, and not too bass-ey. What we really like about the speaker, that we’ve been using in the office since, is how light it is. It really is so portable, and even the shape of it has been made with the way the user would hold it in mind. The curved shape is so comfortable to hold, and it also means that it can be laid flat or propped upright on its coloured end. 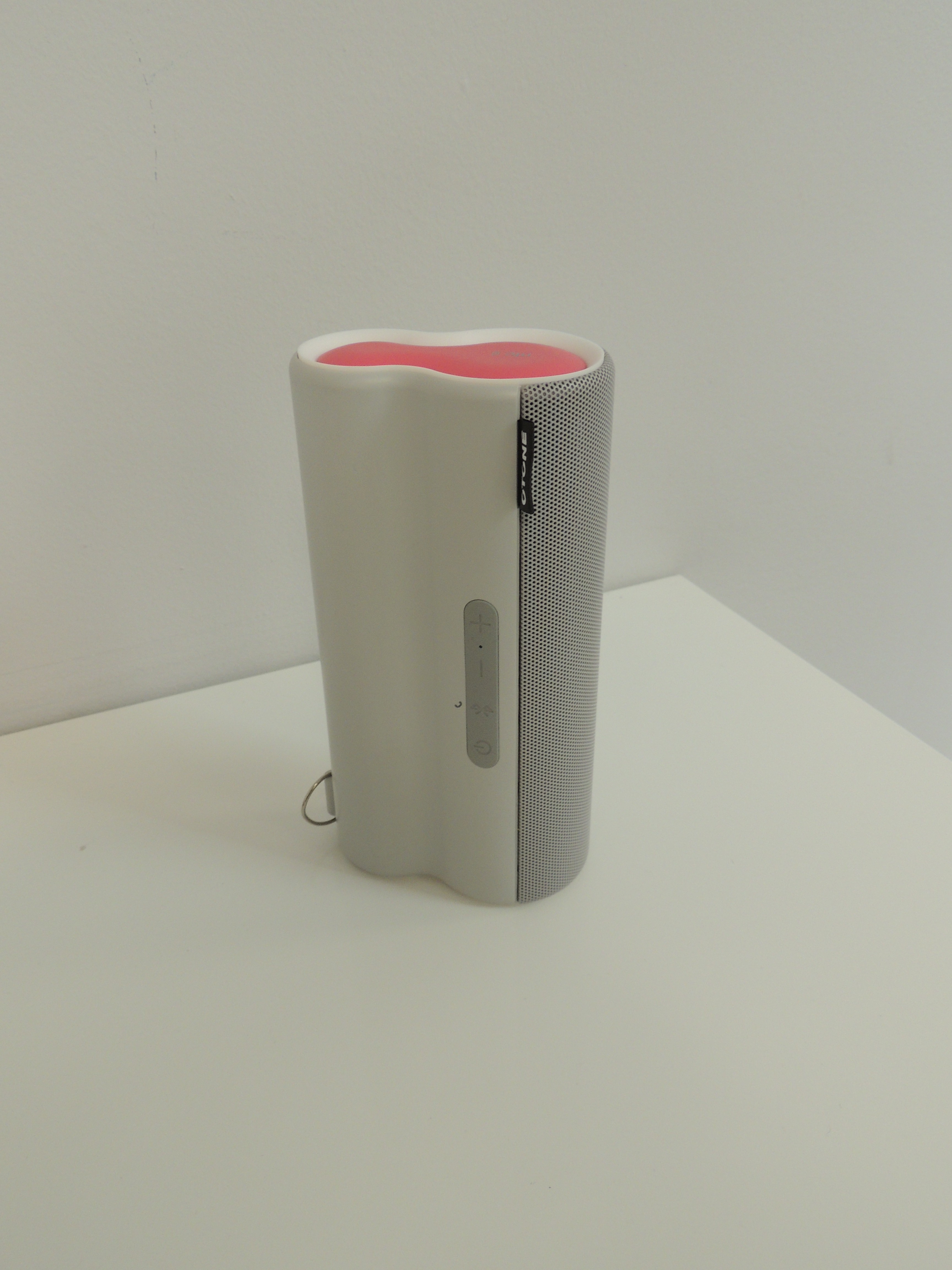 There are six colour options to choose from, red, blue, green, yellow, black and white, and, with NFC, Bluetooth and an aux input, it’ll connect to just about any device you’ve got. Clear and punchy at both quiet and loud volumes, the most impressive feat of this little tube is packing in a 10-hour battery life, especially considering its affordable price of £49.99.

Although we were given a speaker that obviously wasn’t charged, as it cut out after just an hour, once charged, it really did last a good 10 hours, which is great if you want to take it to a festival.

You can buy the Blufiniti from the OTONE Audio website for £49.99. 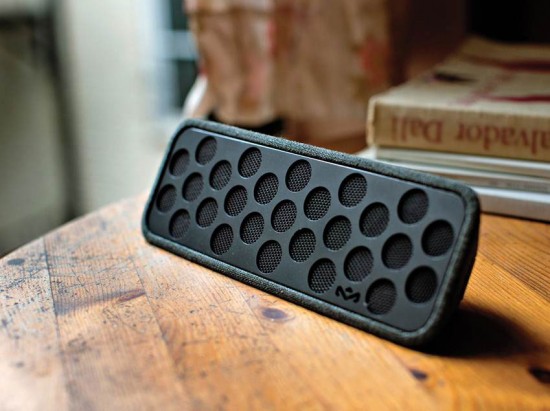 The House of Marley Liberate looks really different to any other speaker I’ve seen, having been made completely from natural materials, metal, fabric and wood – even the packaging is made from recycled materials. It’s not a design that I’m particularly a fan of, but others in the ShinyShiny office really loved it.

While the actual look of the Liberate wasn’t entirely appealing to me, the shape of the House of Marley speaker is easy to hold and sits quite nicely. It’s also really light and portable, and has rubber buttons for power, Bluetooth and volume on top. Unlike the OTONE Audio Blufiniti, a lot of volume adjustment has to go on between the phone and the speaker to get the right volume.

The Liberate was susceptible to distortion when I had the the speaker’s volume at the maximum, but, in all honesty, it’s not often you’d do that in reality anyway. At a slightly lower volume, the audio was very clear and could fill a medium-sized room quite easily, so is perfect for a bedroom or kitchen. The Liberate shows off vocals over instruments when listening to music, and is definitely better for acoustic songs rather than hip-hop music, as it’s not particularly heavy on the bass.

A really good feature of the Liberate is that it gives quite a few warnings of low battery before it completely dies out and turns off. It also saves on energy by automatically shutting itself off when inactive for over 15 minutes. It lasts about nine hours though, when charged, so enough to get through a workday.

The Liberate is definitely more about design, and if you’re a fan of the look, you should definitely go ahead and buy it, as none of the speakers out there just as good as this one look anything like it.

The House of Marley Liberate is available to buy from Amazon for £83.94. 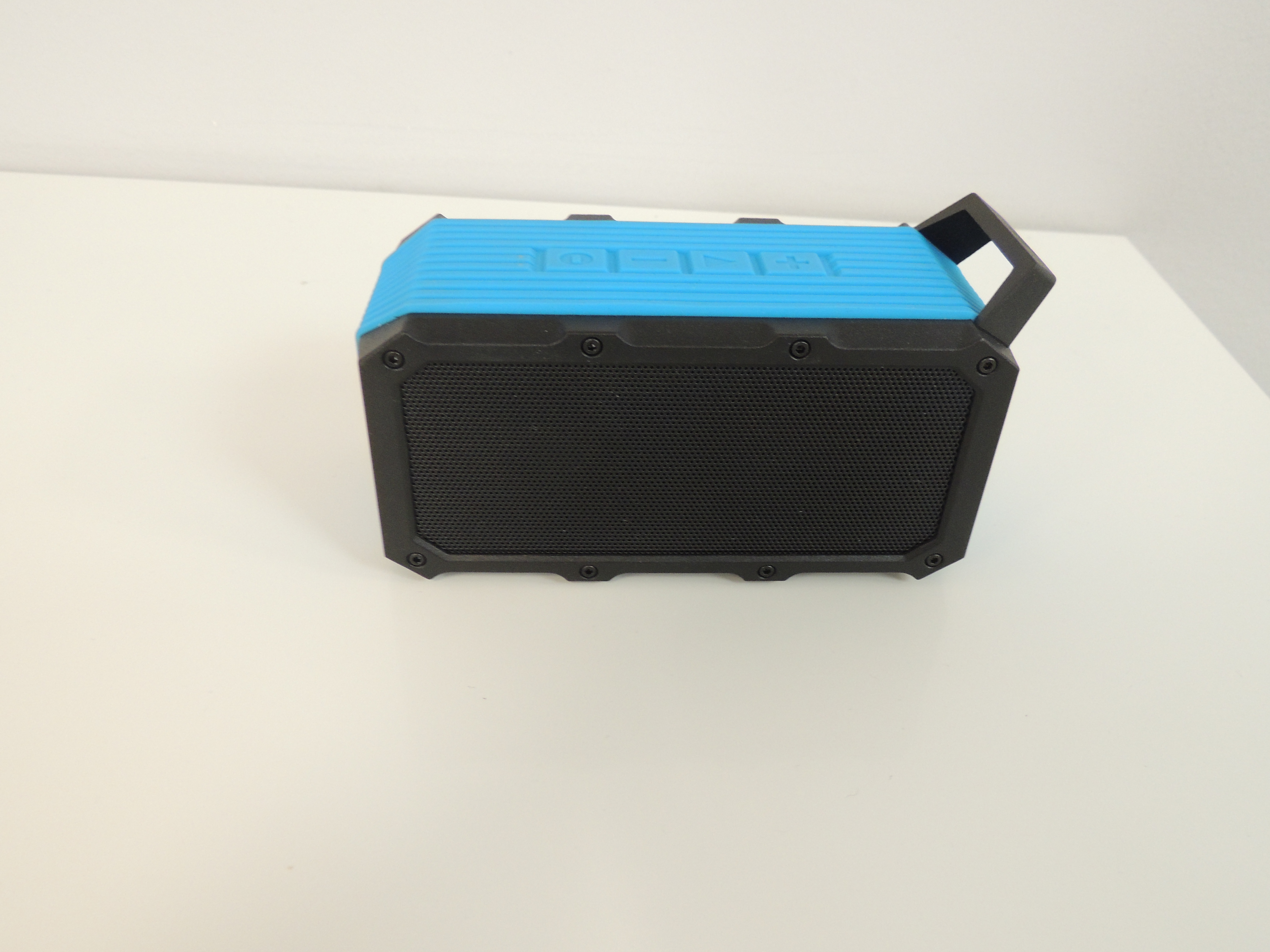 Divoom’s wireless speaker lineup tends to focus on portability for those with active lifestyles, evidenced by the bike-mounting kit that comes with the Voombox Ongo, so you can listen to your speaker as you cycle. All it needs to set it up is to be screwed into the bottom of the speaker and then uses a clamp to mount to your bike. Easy.

Not only does this little speaker come with a bike mount, it’s also rugged and weather-resistant, so perfect for those on the go. Like the OTONE Audio Blufiniti, the volume controls on the Ongo work together with your mobile phone’s volume levels, not independently of them. The really great thing about it though is that if you hold down Play/Pause, it will disconnect the speaker from your currently paired mobile device and make it ready to pair with another device, unlike most speakers which require you to turn off your phone’s Bluetooth to disconnect it before pairing with another device. 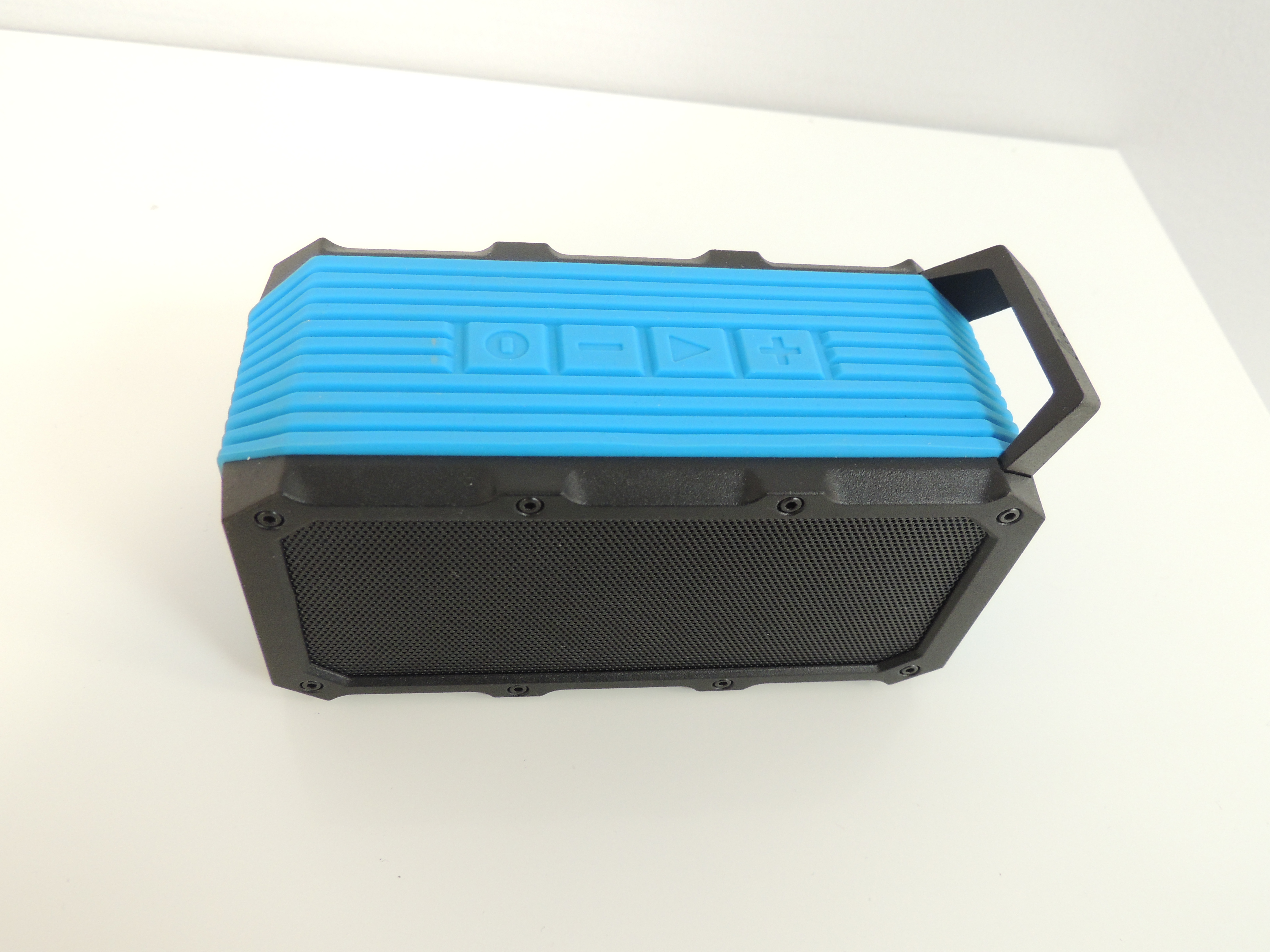 Apart from this, setting up Bluetooth on the Ongo is easier and quicker than most other speakers, as it’s ready to be connected as soon as it’s powered on. There’s no pressing down of a Bluetooth button to set it up with your phone.

At eight hours, the battery life on the Ongo is pretty average, but is perfect for that long cycle in the summer.

Considering its small size, the Ongo surprisingly delivers really big on bass, although does sound as if it’s teetering on the edge of distortion, and the speaker vibrates wildly when playing heavy songs at top levels. It’s got pretty clear sound on more acoustic songs, and, for the price, is a great little speaker, and is definitely the right choice for any keen cyclists who feel like they’re missing some tunes on their ride.

The Divoom Voombox Ongo is available to buy from Amazon for £43.63 to £56.98, depending on which colour you choose. 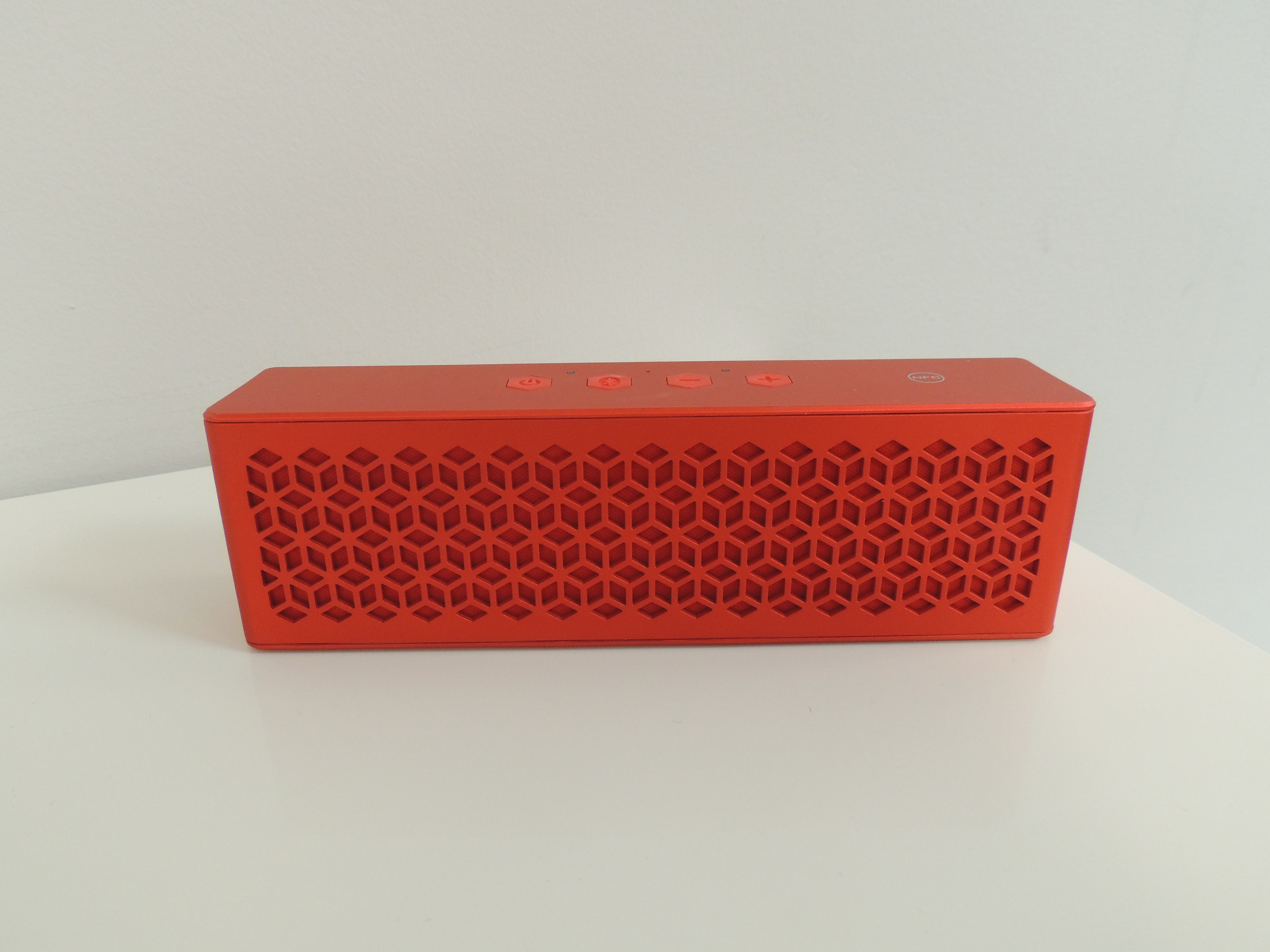 The Creative MUVO Mini wireless speaker could be the ultimate Bluetooth blaster for your next festival or when it’s hot enough to go to the beach (LOL), as not only is it small enough to be thrown into your bag, it’s also waterproof to keep the tunes going even if you’re hounded by rain.

With a really simple but effective design, the MUVO Mini looks really good, and is IP66 rated, making it water and dust resistant, and it has just four buttons to fiddle with.

The MUVO Mini’s four main buttons are for volume, power and Bluetooth, as well an NFC tag for quick pairing with your mobile. On the back there’s a USB port for recharging the speaker, along with a 3.5mm aux-in port, and both are sealed by a rubber flap. While the speaker won’t take a dunking in the bath, it will take splashing. The battery life is also impressive, as we found our speaker kept on running for around 10 hours from a single charge. 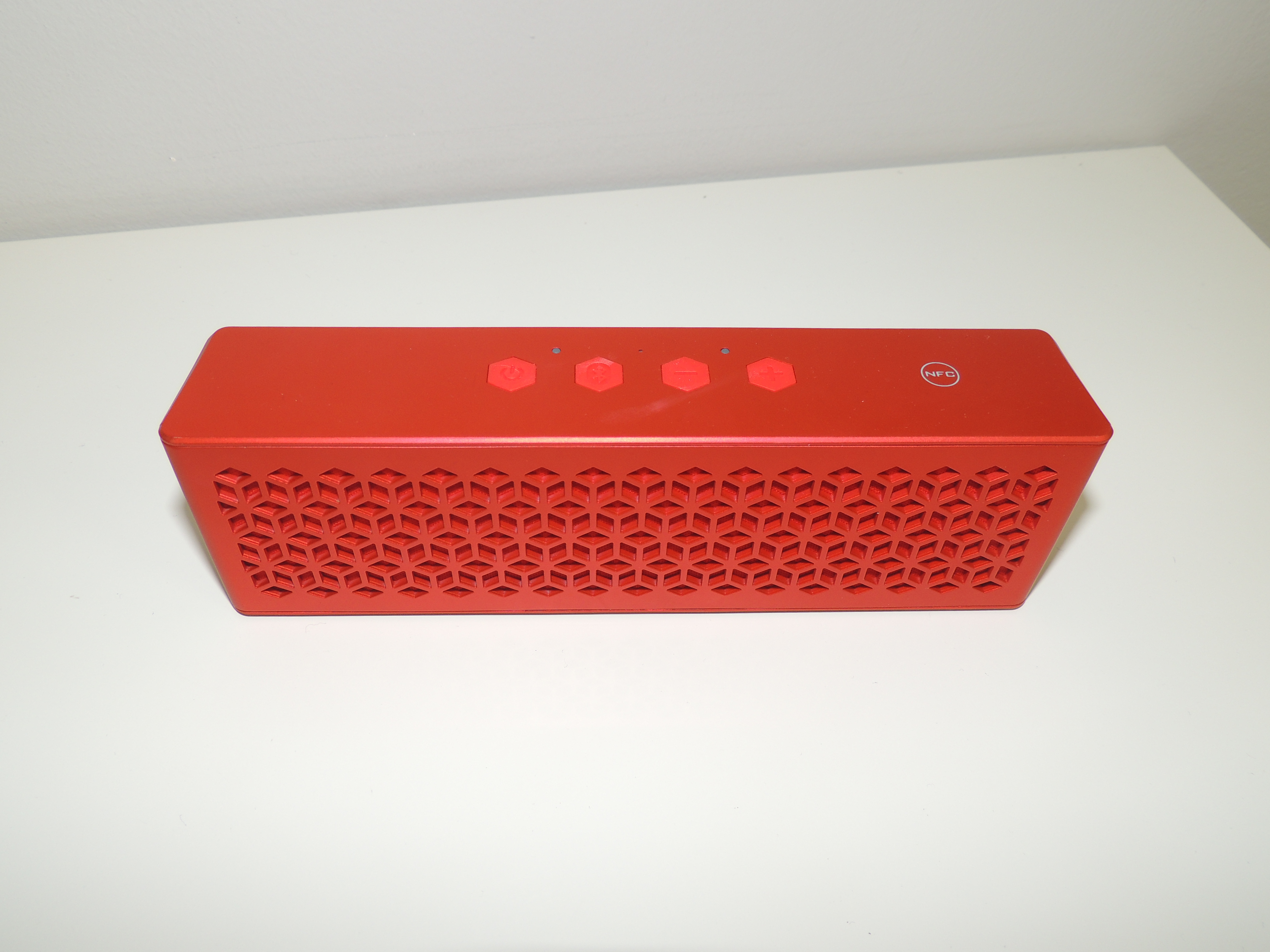 The MUVO Mini, even with its diminutive size, packs quite an audible punch thanks to its two full range micro drivers and dedicated front bass radiator. While it’s obviously not going to be AMAZING on the bass, but, for this price, the overall sound quality is more than able to fill a room, and really did fill our office at not even 70% of the maximum volume! Even when the volume is at maximum level, the tones remain clear and don’t sound like they’re about to blow a speaker.

Of all the speakers featured, this would be our favourite for a festival, as it’s capable of withstanding the elements and could happily set the music atmosphere for a group of people drinking round their tents. It’s also incredibly light, and has an impressive 10-hour battery life – all you need from a festival speaker.

The MUVO Mini comes in four different colours; red, blue, white and black, and is available from the Creative website for £49.99. 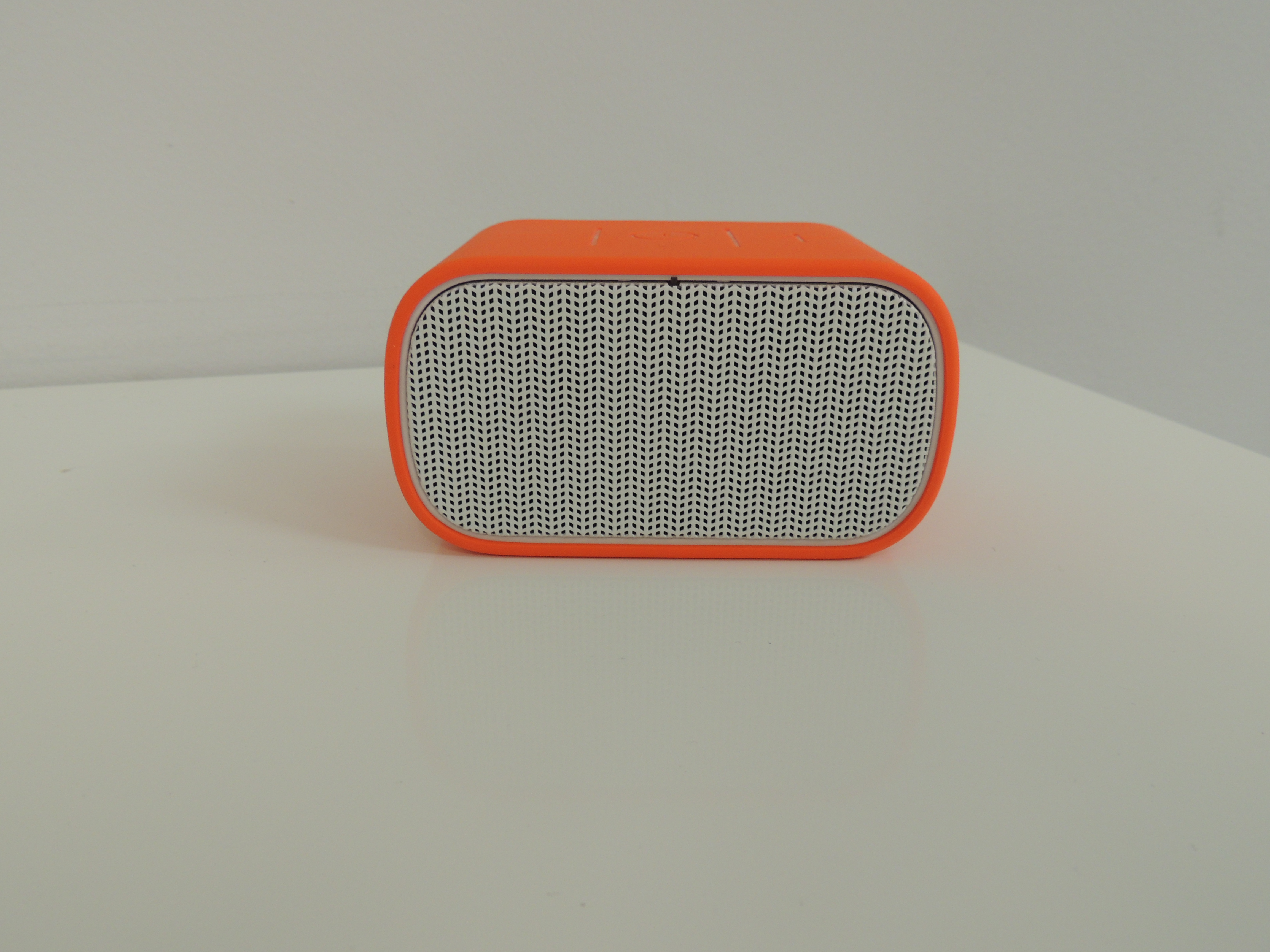 Ultimate Ears has always been well-known for the UE Boom Bluetooth speaker, but its little brother, the Mini Boom has just as much to offer, at a fraction of the price.

Aside from the wide variety of colours it’s available in, the Mini Boom shares little in common with its sibling from an aesthetic point of view. But, what these little speakers do have in common is what UE refers to as ‘unexpectedly big sound’, which it really does have.

It’s a very small speaker – although actually quite heavy for its size – and gave just as much sound, if not more, than all the other speakers we’ve featured on this list. It really does come as a surprise too. When it comes to audio quality, it had a really warm, and full midrange, as well as an impressive bass response and powerful maximum volume, however it did begin to dance around when we played really heavy bass music. This was quite fun to watch though, as it made it seem like the speaker was dancing. 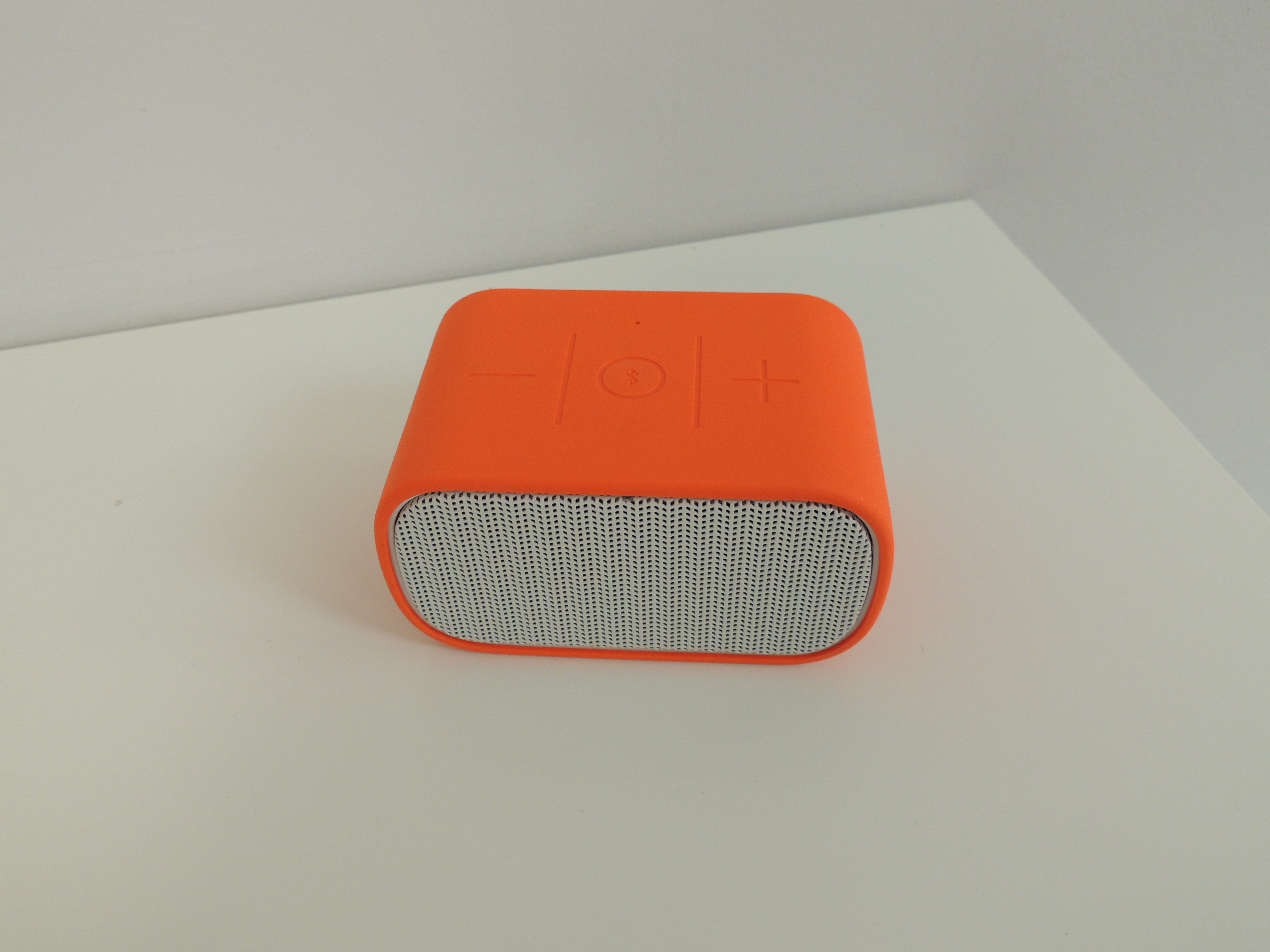 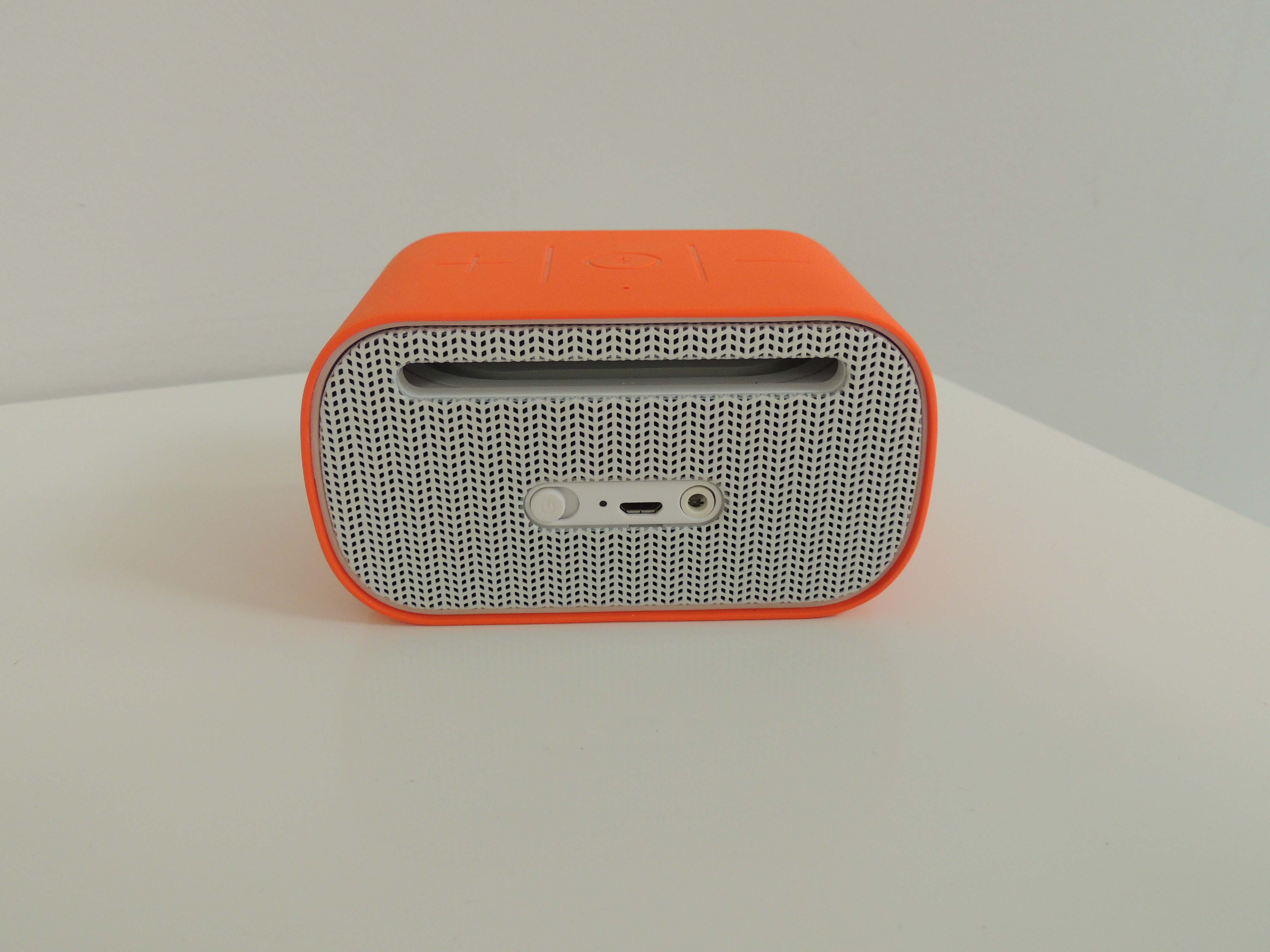 Carved into the speaker’s wide top side are two large volume buttons which flank a pairing button. At the backside are a small sliding power switch next to an LED charging indicator, a 3.5mm Aux in, and mini-USB charging port.

The Mini Boom is relatively well stocked with features, including NFC pairing, an onboard speakerphone, an extended Bluetooth range of approximately 50 feet, the ability to pair with two devices, and, of course, its ability to wirelessly team up with a partner Mini Boom to double-team the sound. Battery life is about 10 hours.

The UE Mini Boom is available to buy from the Ultimate Ears website for £79.