This weekend was the pre-inaugural voyage of Royal Caribbean’s new cruise ship, the Anthem of the Seas. We went along to find out what a ‘smart ship’ is, what actually happens on a cruise, and to check out the robot bartenders we’ve heard so much about. Here’s our Anthem of the Seas review.

On arriving at Portsmouth, this was waiting for me at the dock – and I was so starstruck that I left my suitcase in the taxi. Good start…!

If, like me, you’ve never been on a cruise ship before, it will take your breath away. They’re cities on water. The Anthem has an esplanade of shops, a theatre, a music hall, dodgems, indoor skydiving, a casino, an arcade, a London Eye-style panoramic pod, roller disco, basketball, a climbing wall, a gym, a spa, pools, whirlpools, hot tubs, and more restaurants than my local high street. There’s even a Jamie’s Italian.

And did I mention the cakes? 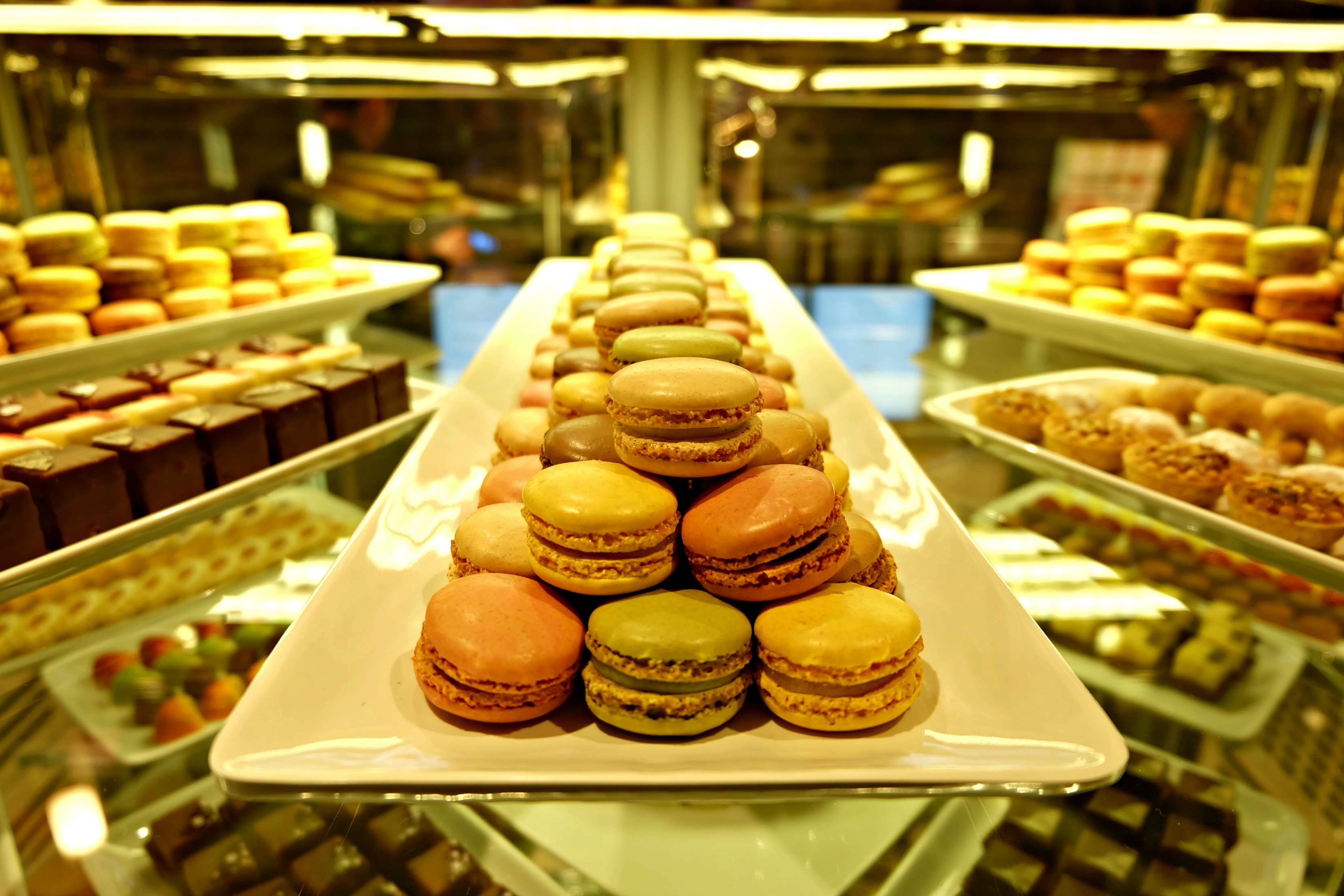 I had a double ocean view stateroom with a balcony: 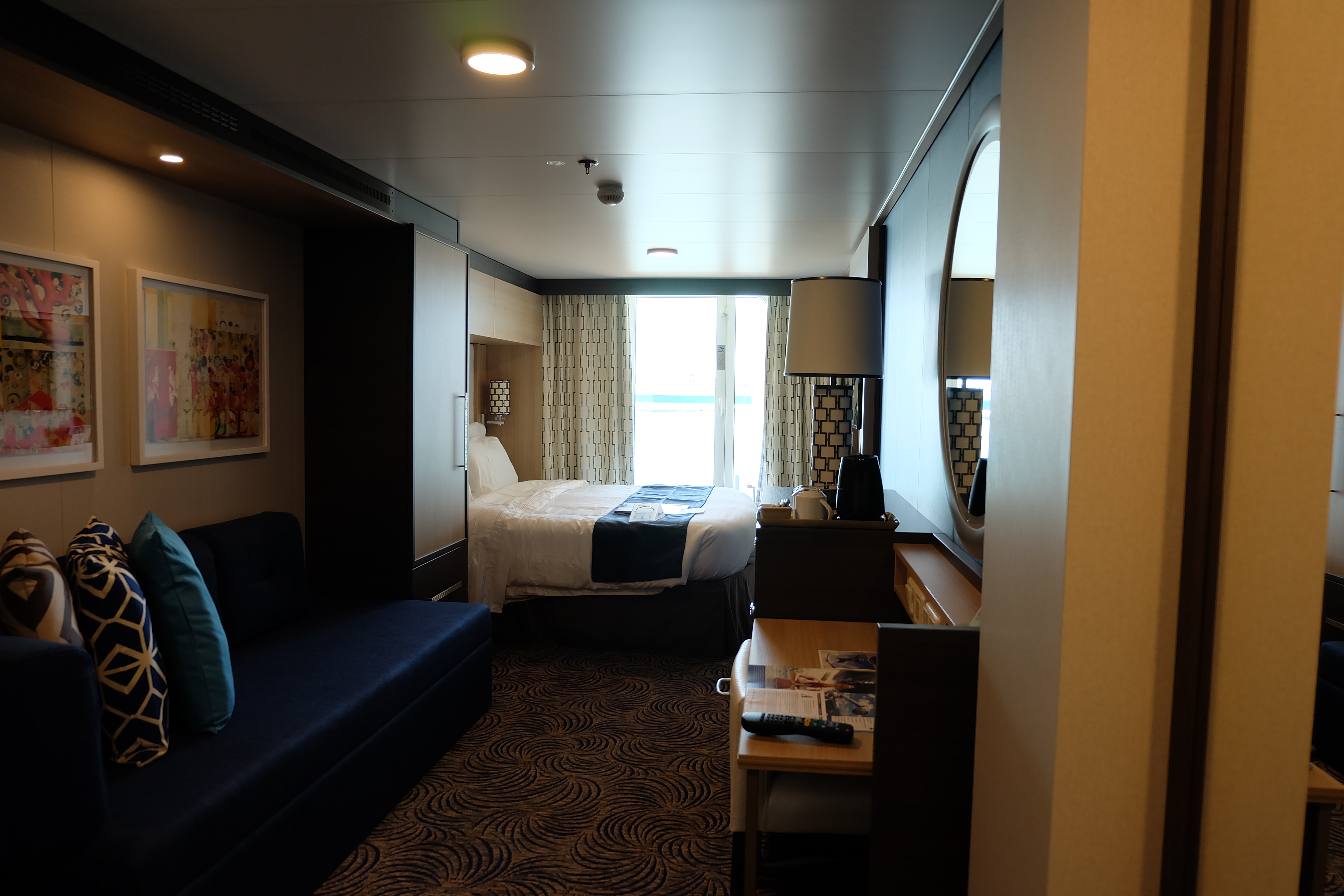 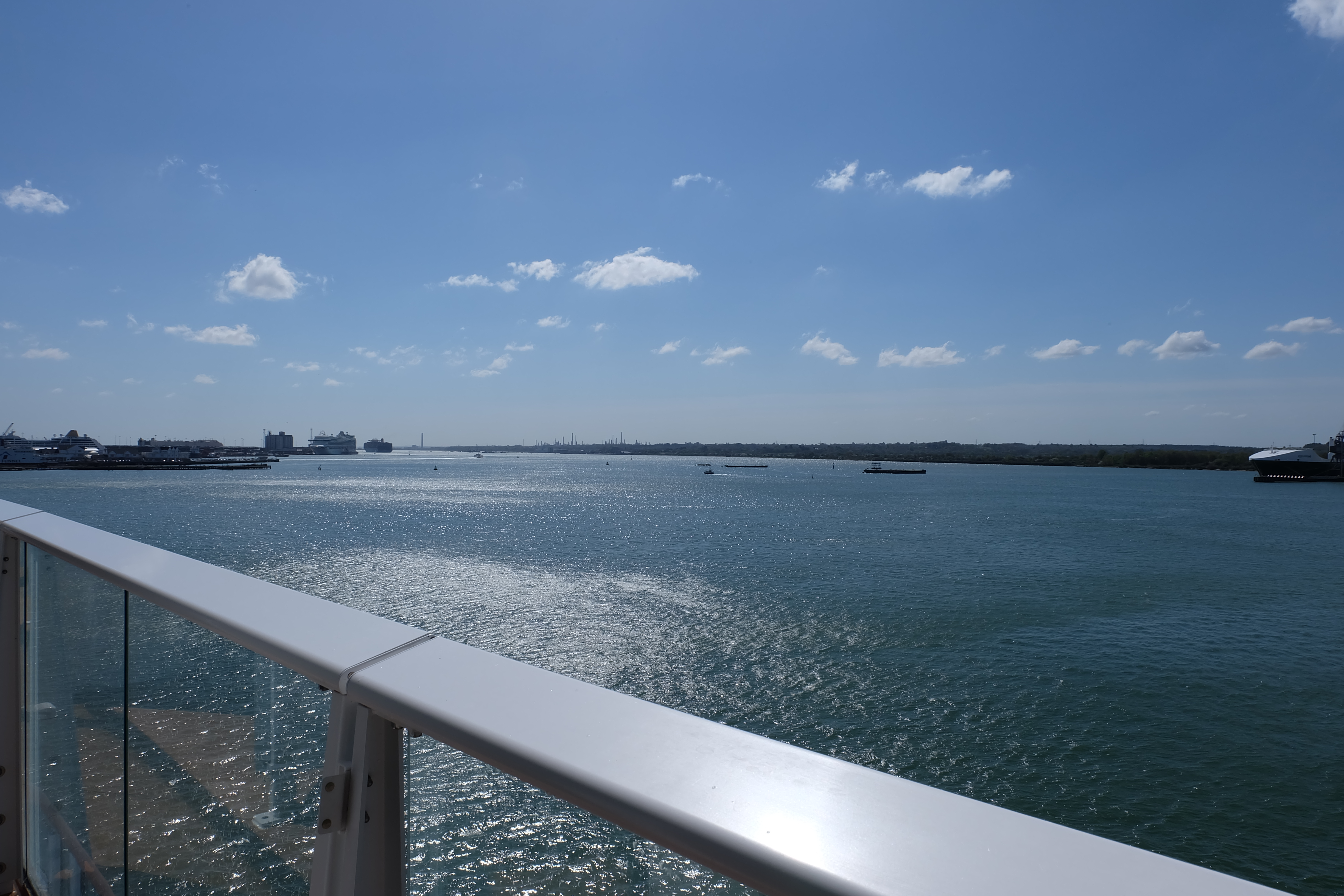 And even in here, the ‘smart ship’ ethos was apparent. The WiFi is excellent (14-15 Mb/s download, 7-8 Mb/s upload, 220-300ms ping times when I ran speed tests), and in addition to European and US plug sockets on the wall, there were USB ones too: 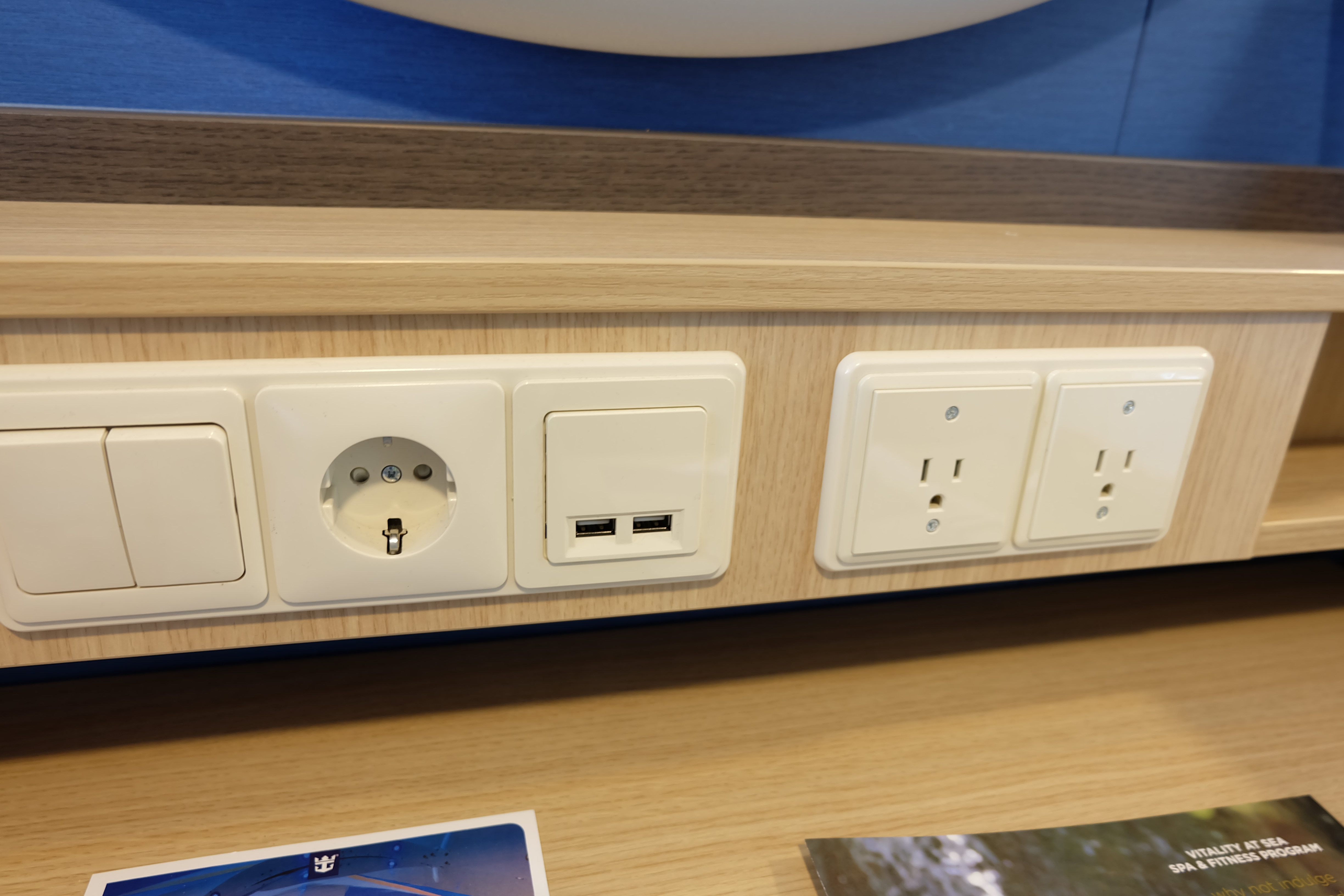 And waiting for me on the bed was my WOWband, an RFID wristband designed just for the ship. It was pre-configured to know my room number, age and credit card information, so all I had to do was strap it on like a watch and I could get into my room, pay for things and prove I’m over 18 with a single tap. 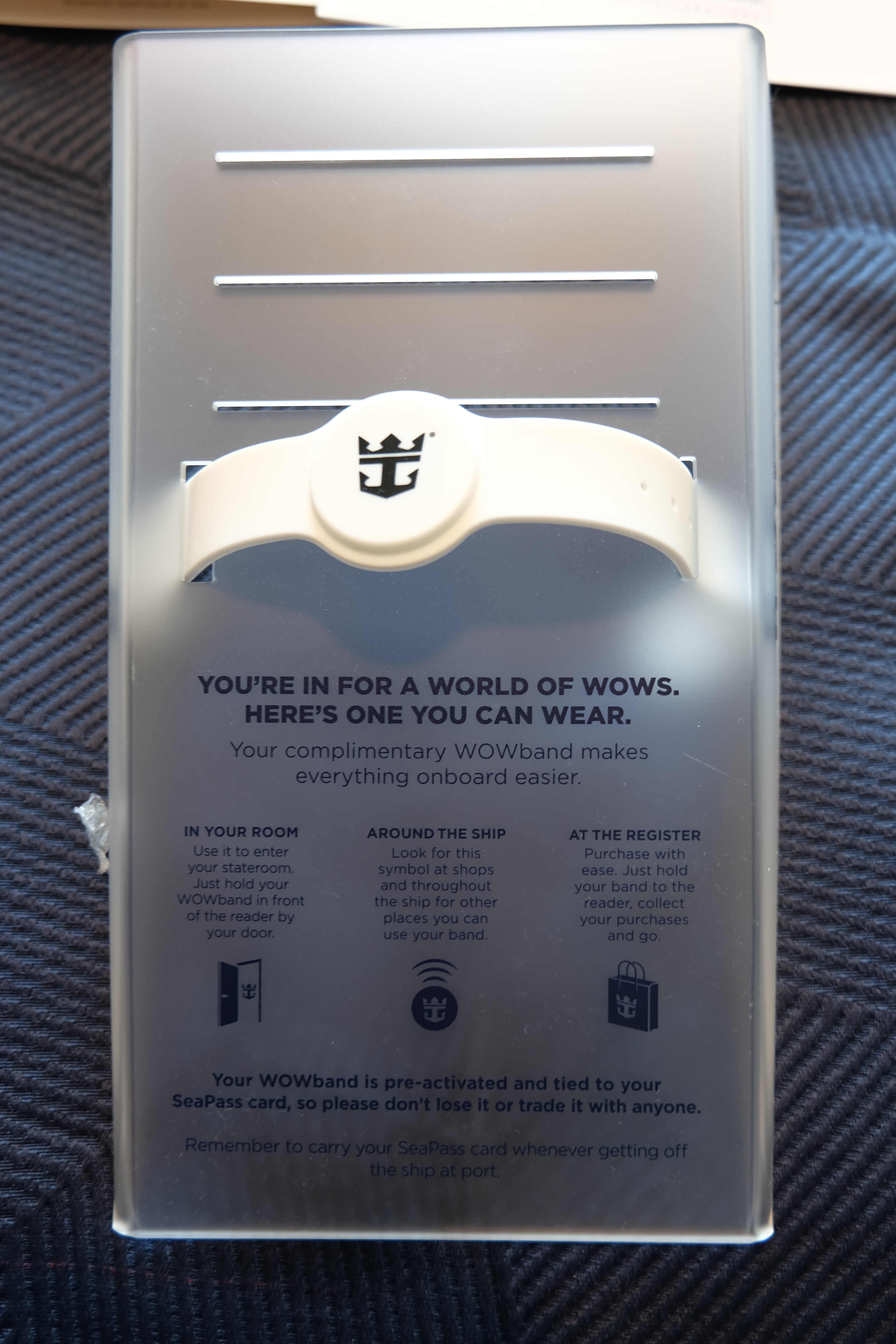 Here’s me using it to pay for an oversized Twix in one of the ship’s shops:

The WOWband is also useful for the Bionic Bar, home of the robot bartenders Royal Caribbean have become famous for. They’re modified Porsche car-making robots, and they make a mean cocktail. 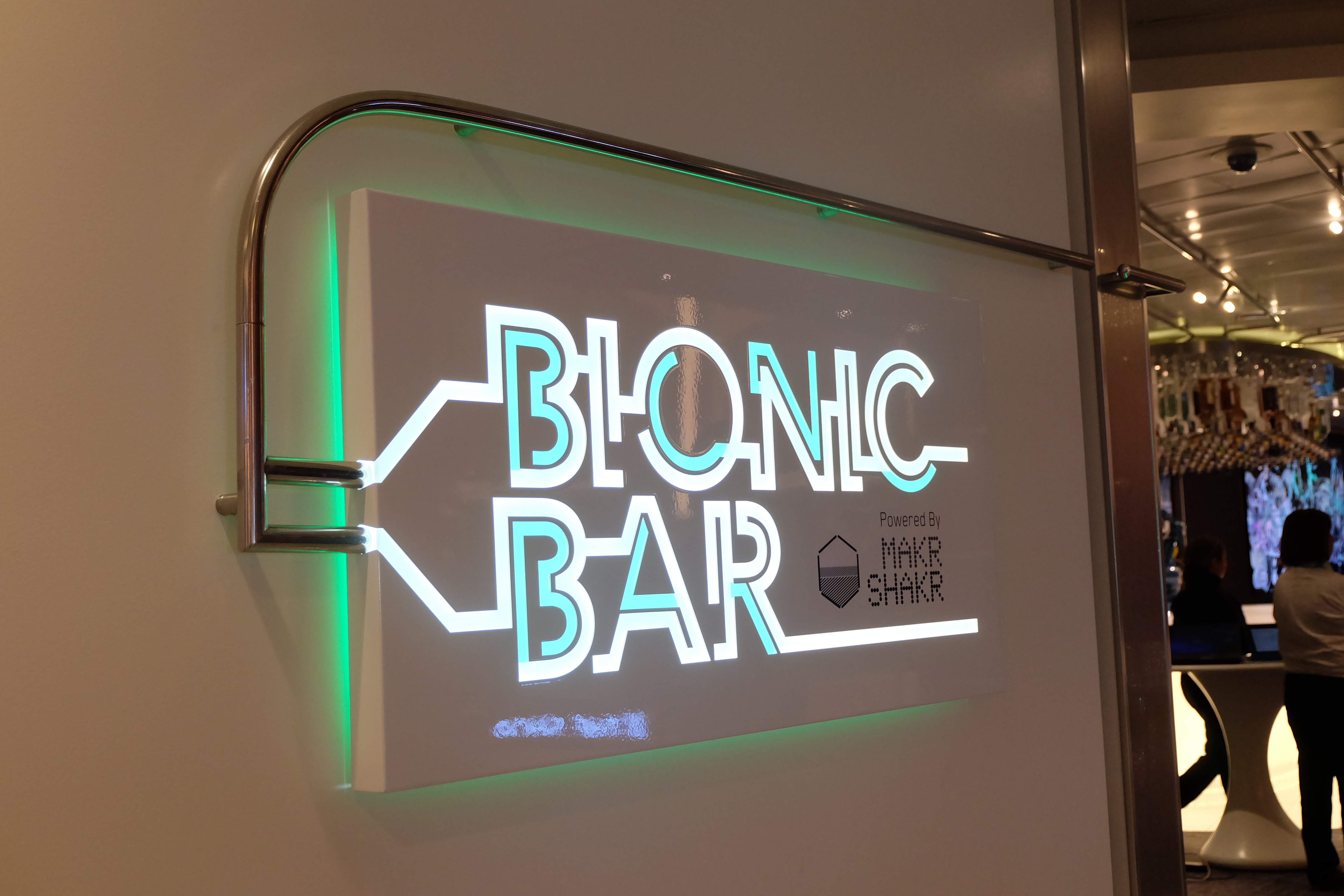 First, you log in and prove you’re old enough by tapping your WOWband on the bar’s tablets: 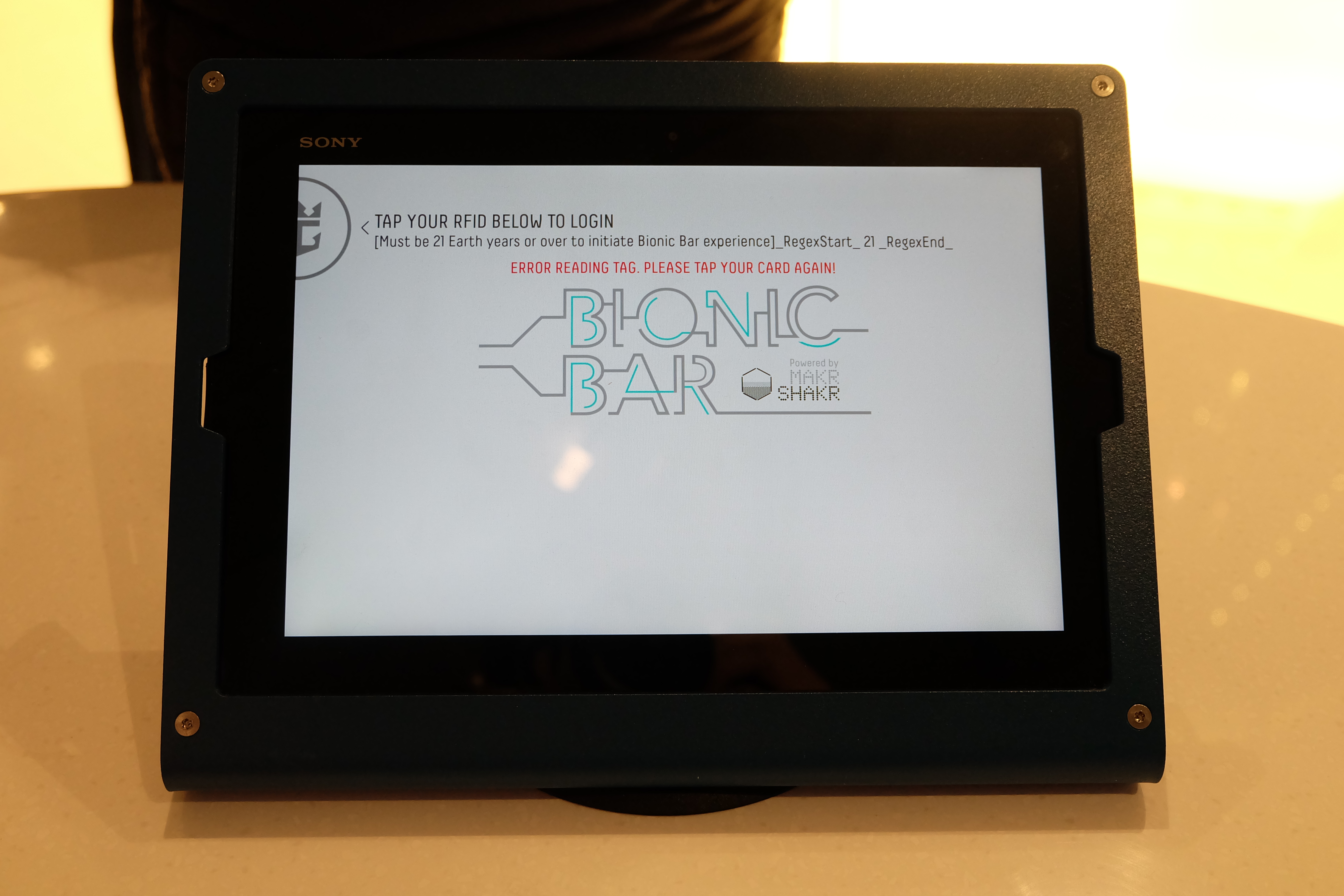 The tablet recognises you and presents you with cocktail recipes and handy reviews: 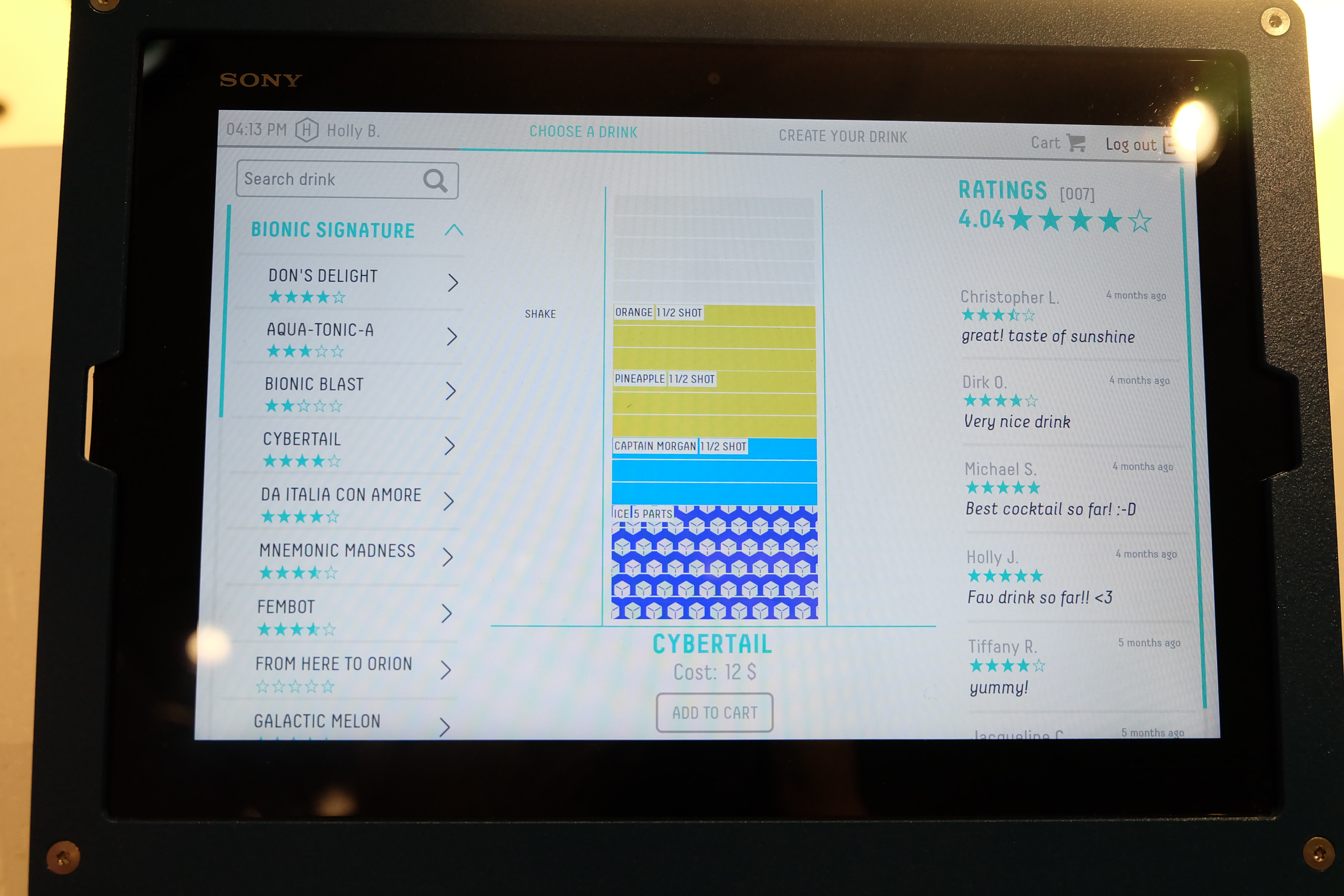 You order your drink, and the robots get to work:

When it’s ready, you tap your wristband to claim your cocktail and it slides right over to you:

Watch our full video of the robot bartenders on YouTube here.

The robots have also been employed in the panoramic Two70 lounge: 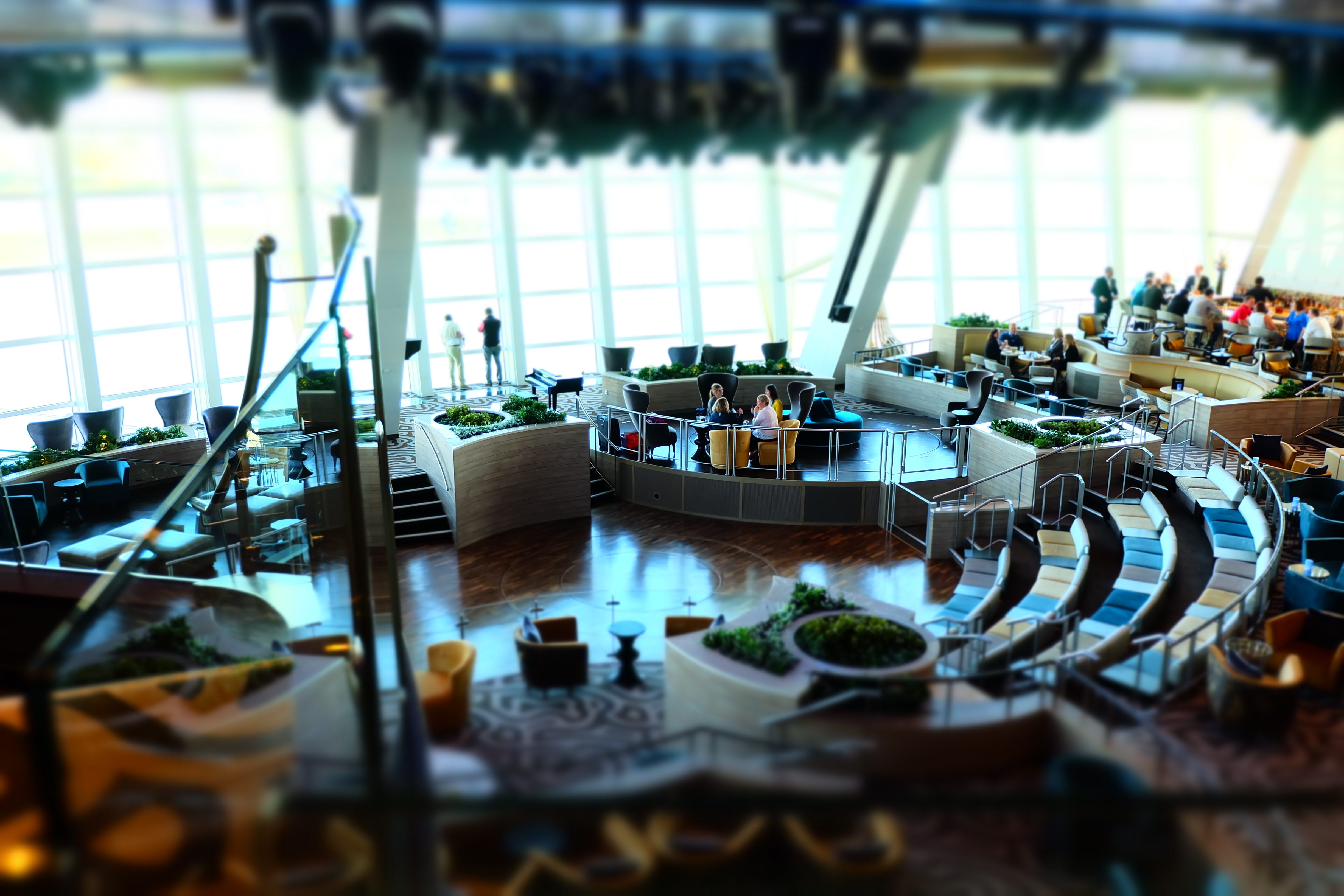 Where they’re attached to screens to make a really striking visual accompaniment to live acts:

Even the windows in Two70 form part of the show, with shades that form the screen for a 12k projector. It’s called Vistarama – here’s the 3D animated test card Royal Caribbean use to make sure it’s set up properly:

As well as providing a spectacular backdrop to live shows, the Vistarama display shows specially-designed scenes, like this world skyline that changes depending on the time of day: 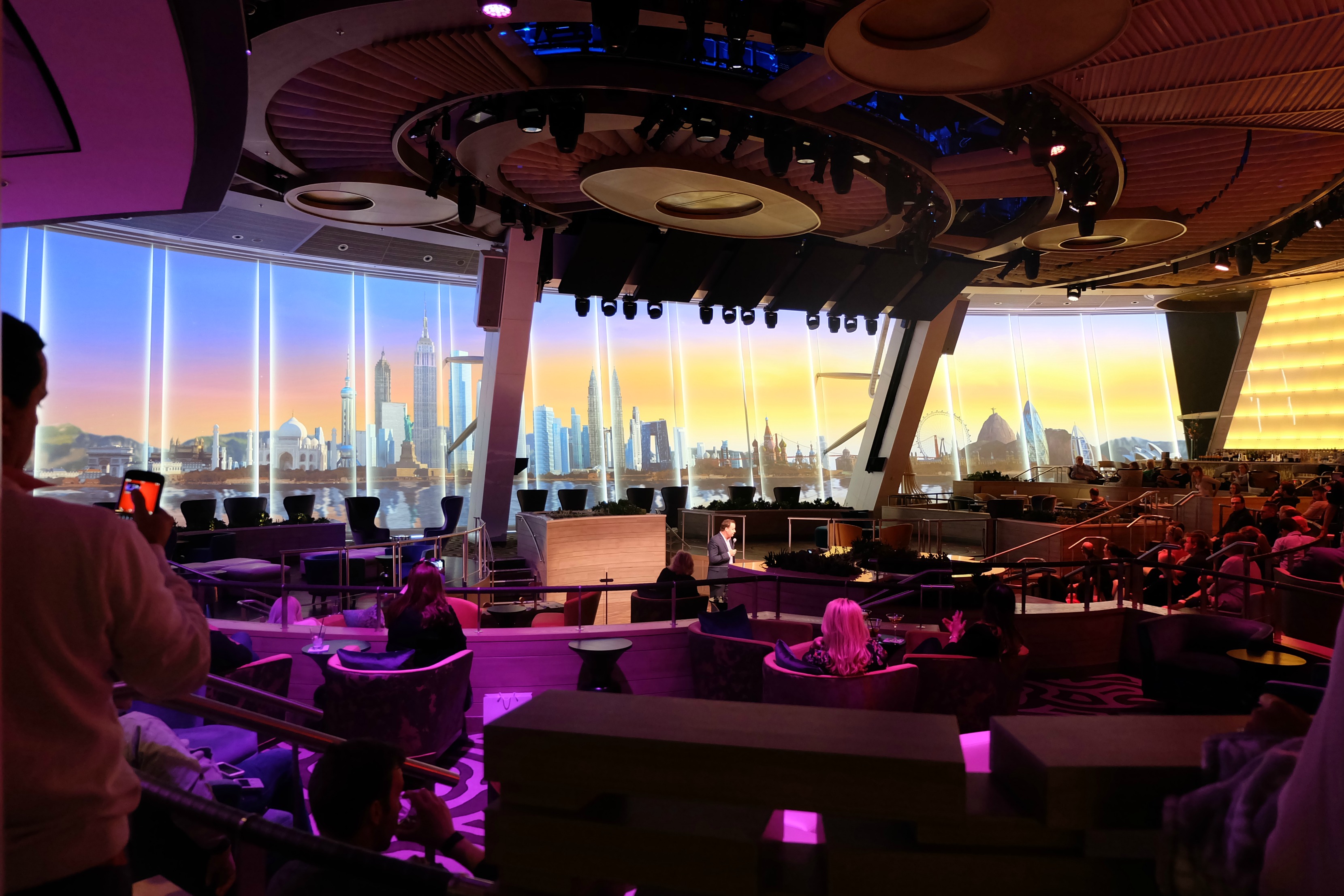 In a less techy way, the lifts change by the day too – special tiles in the floor are changed to let you know what day it is: 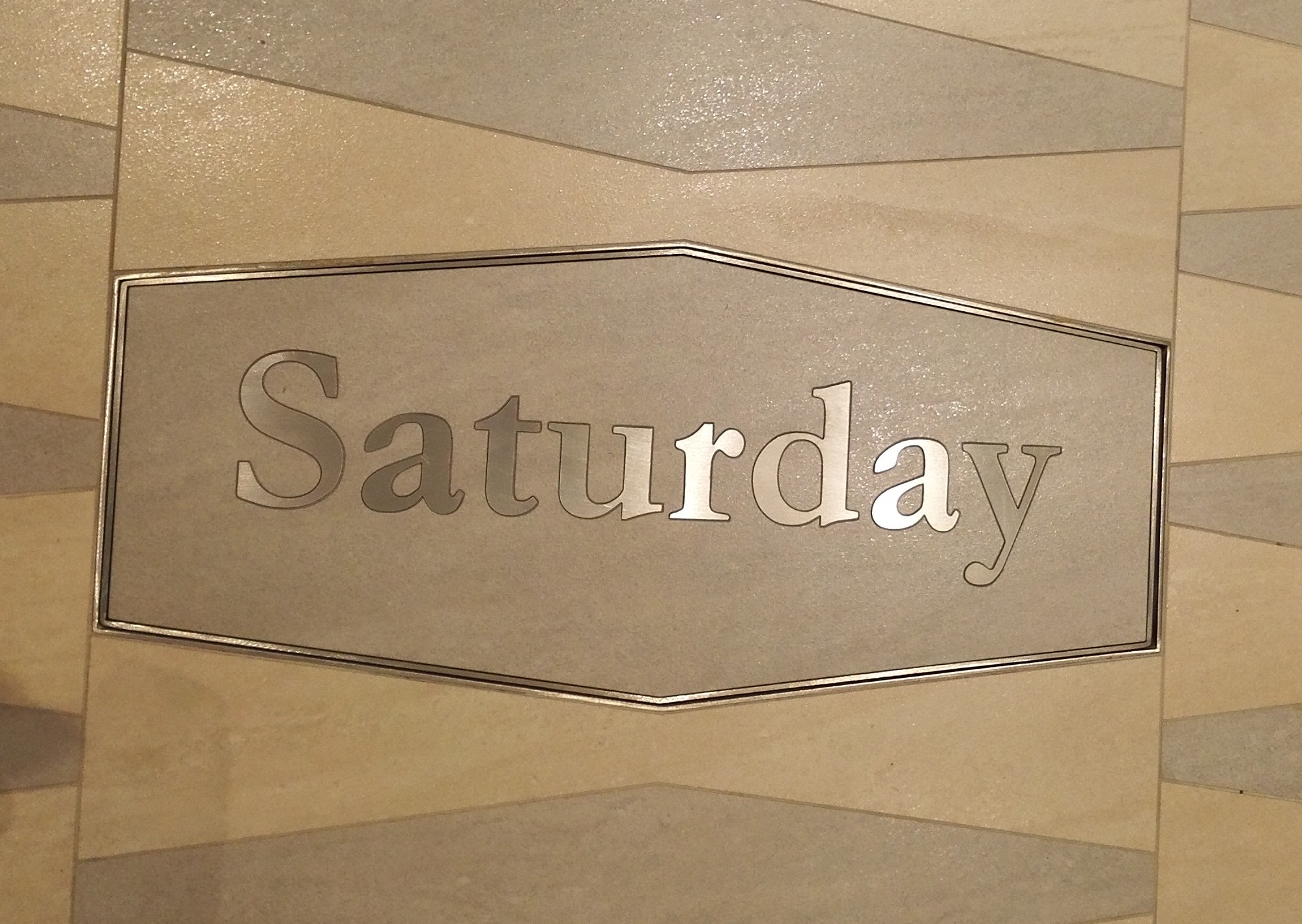 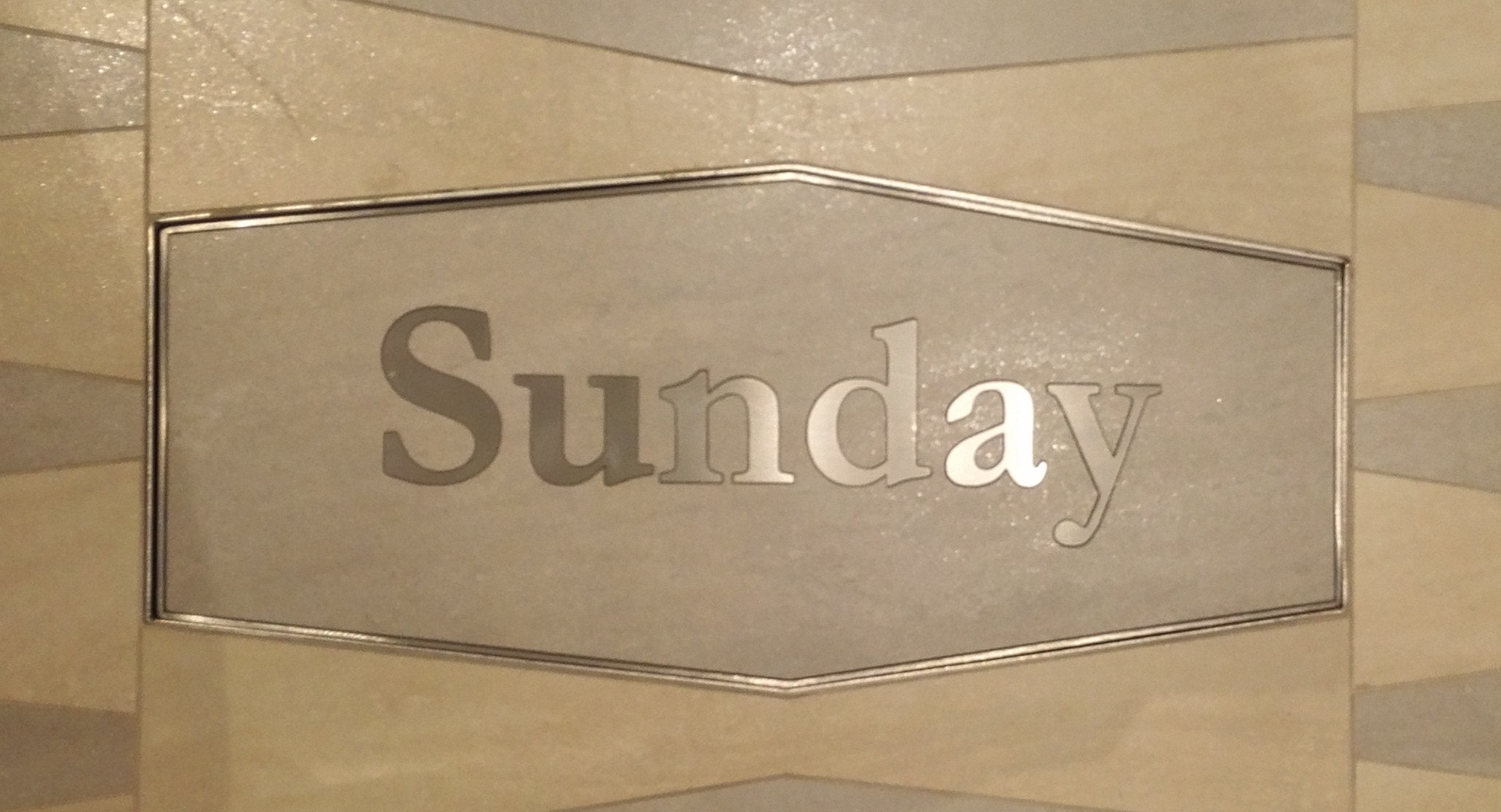 It’s little touches like this that make the Anthem of the Seas feel like an amazingly luxurious way to take a holiday. In fact, I don’t know why the Anthem even needs to go to exotic places – the ship itself feels like a destination. You can go surfing: 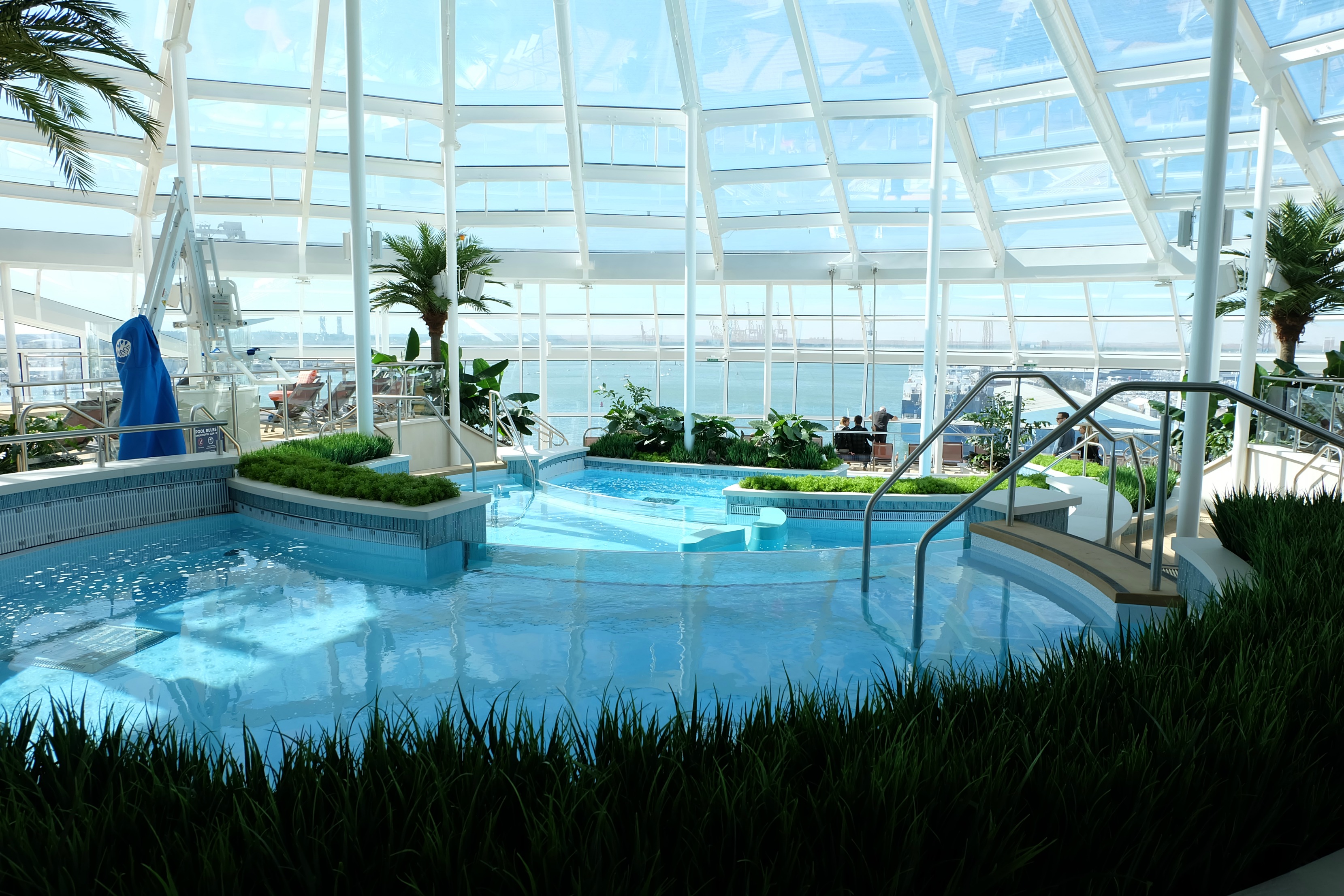 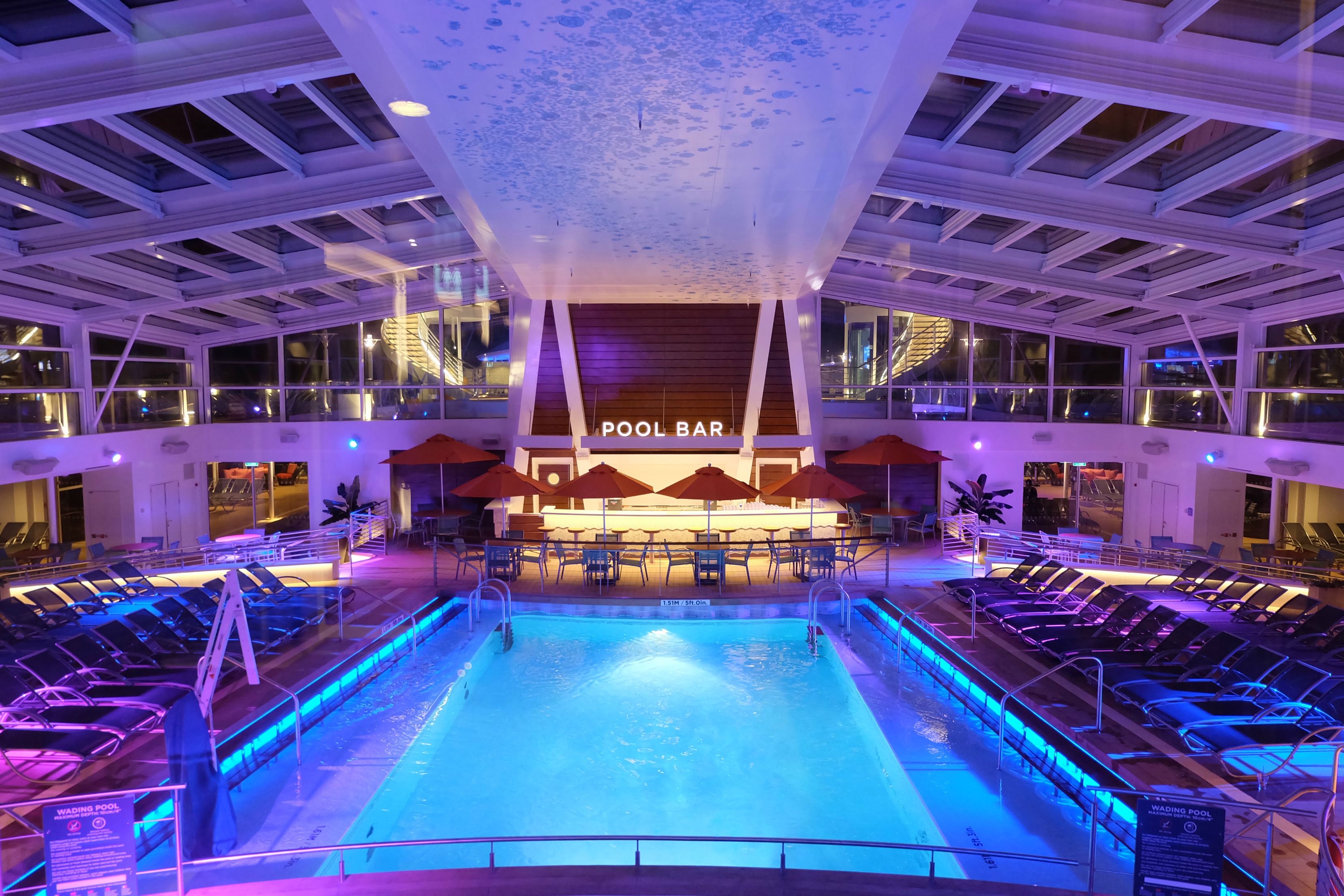 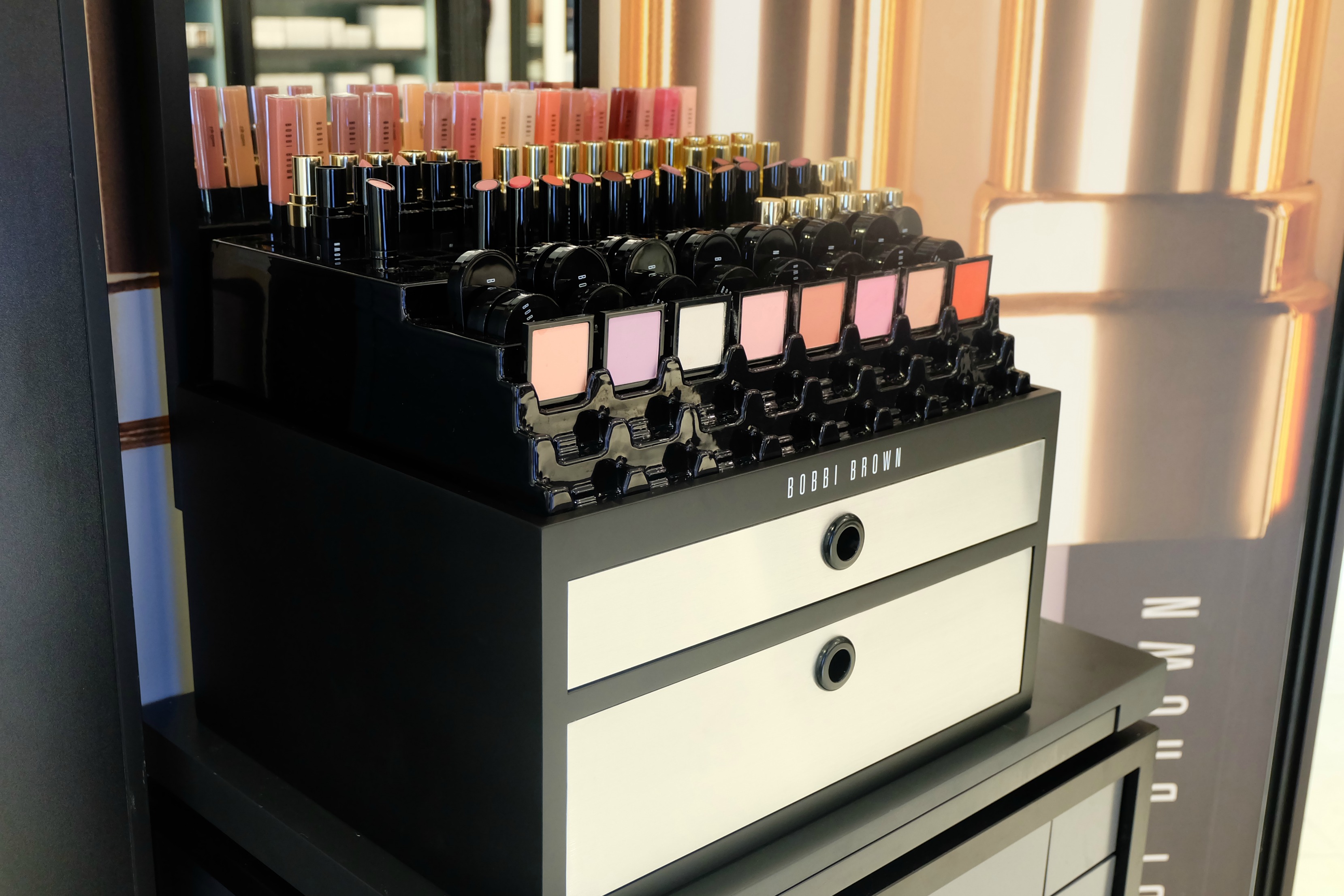 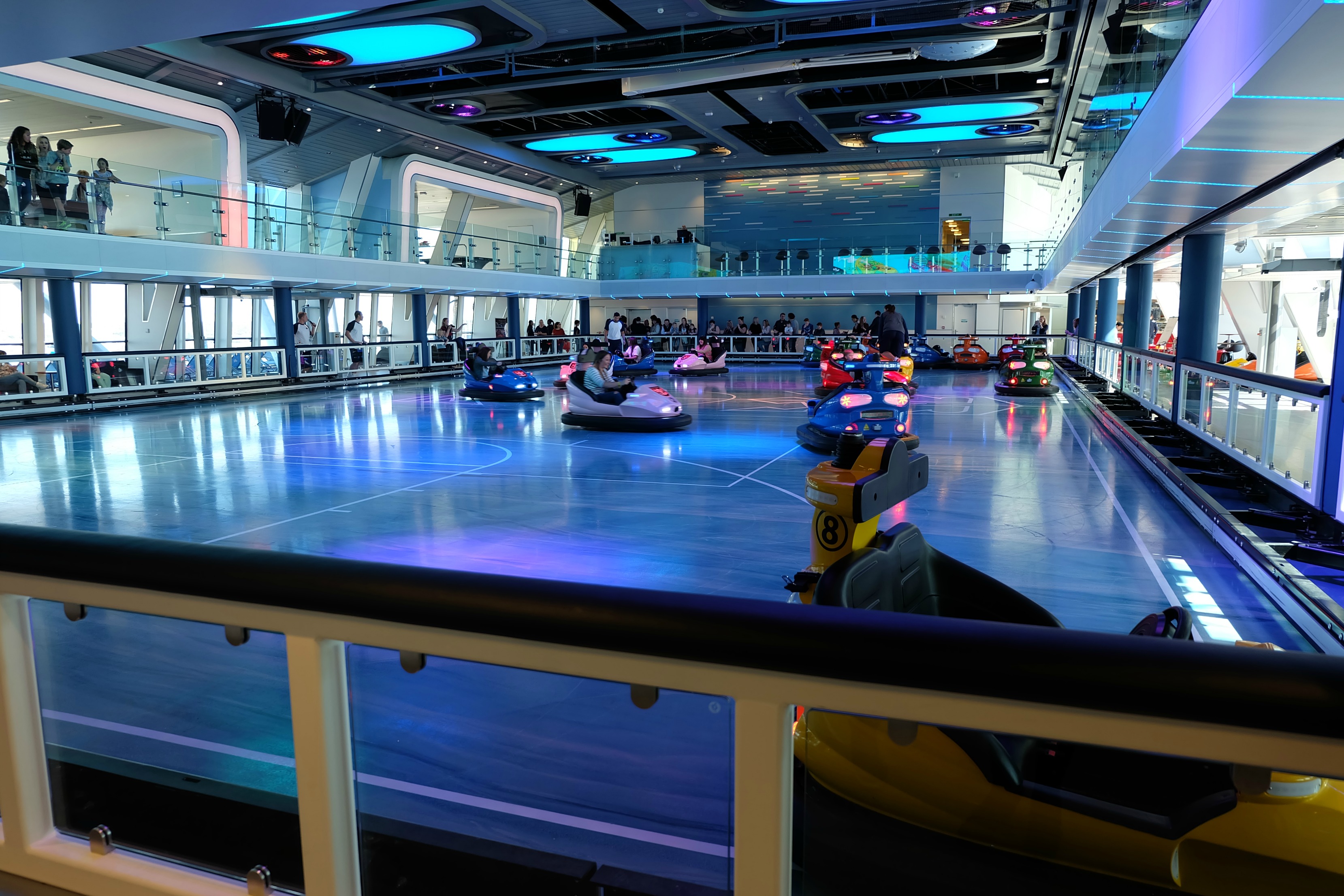 To a Broadway show (this is We Will Rock You): 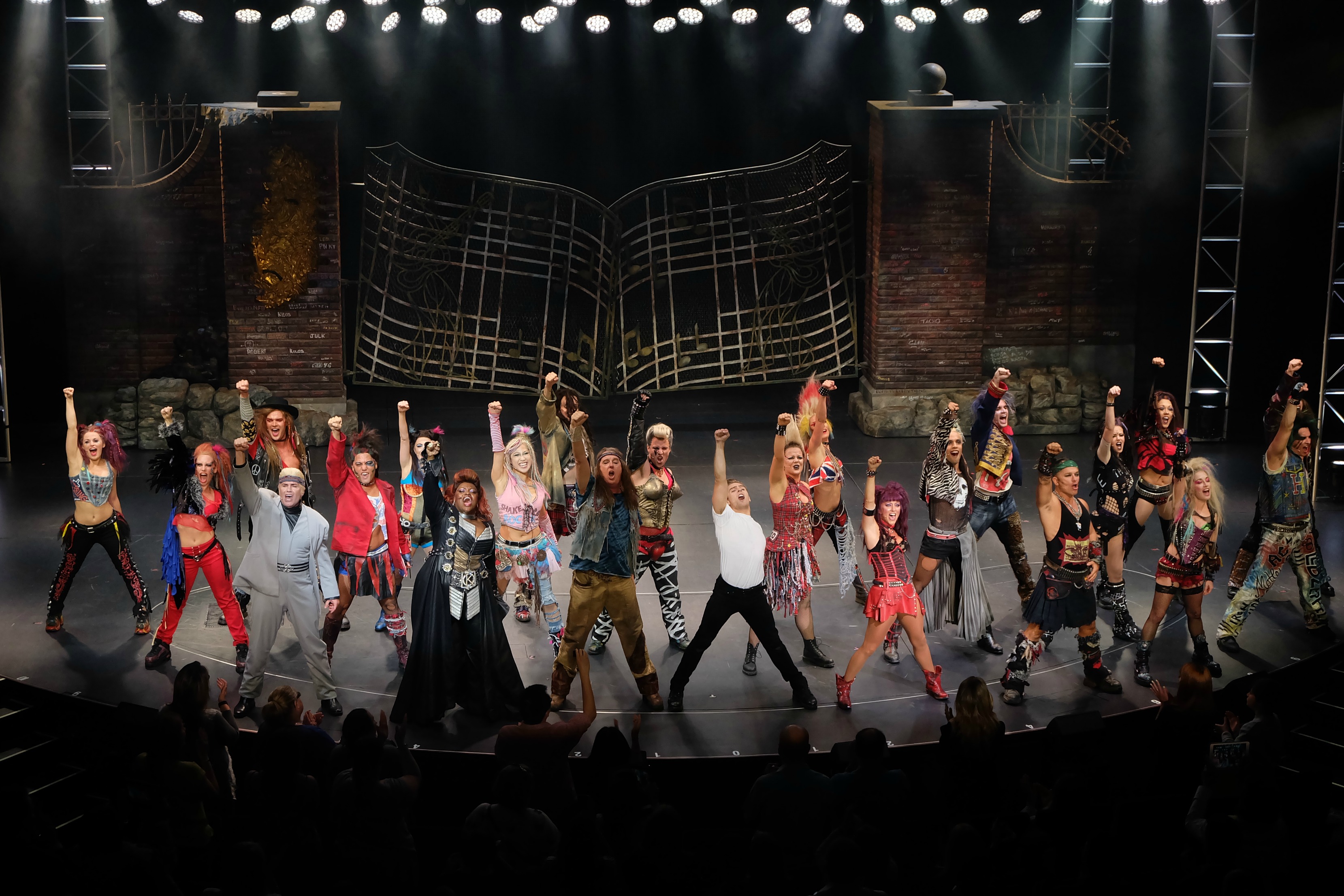 To Wonderland (a restaurant): 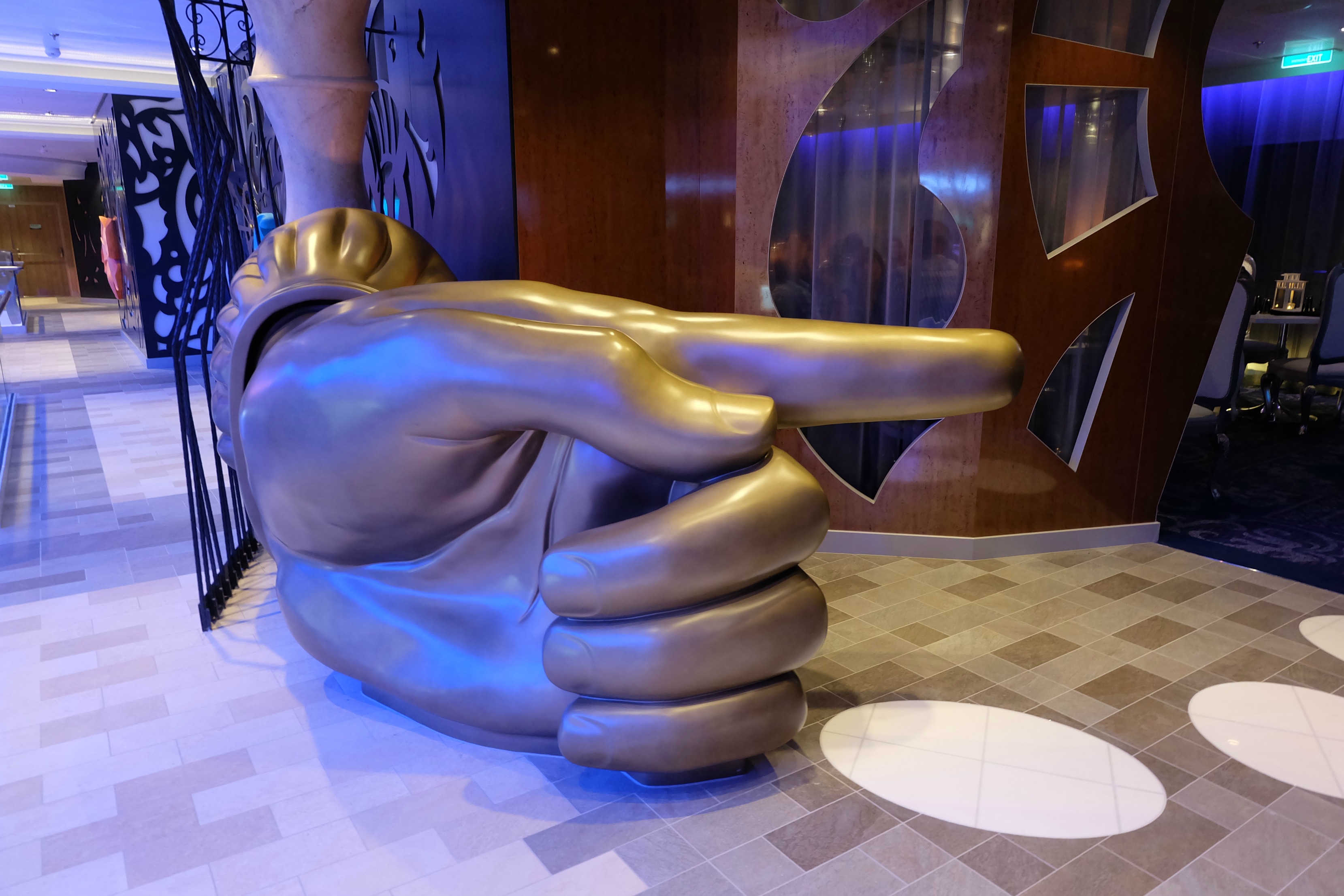 And for every kind of cuisine you could want: 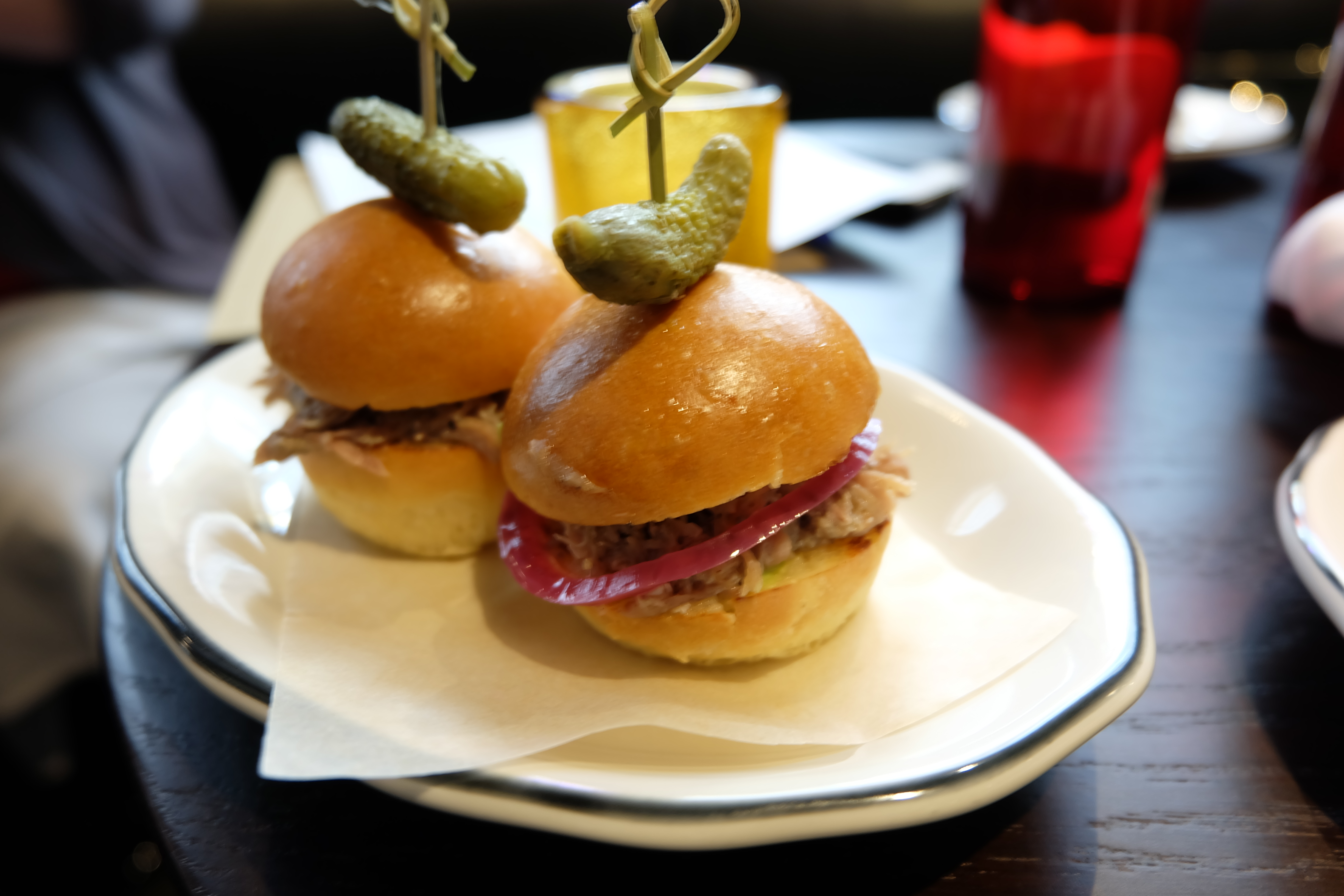 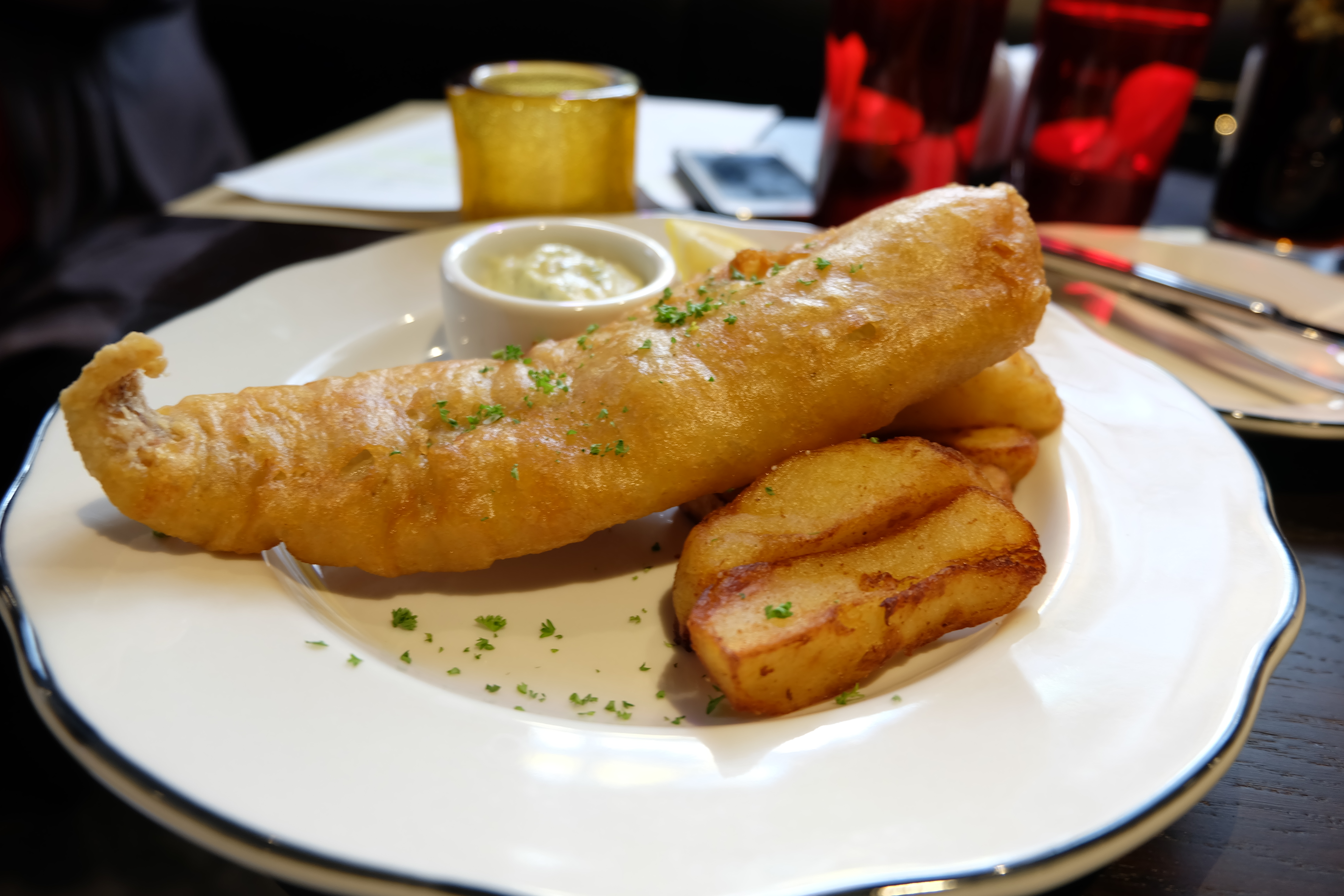 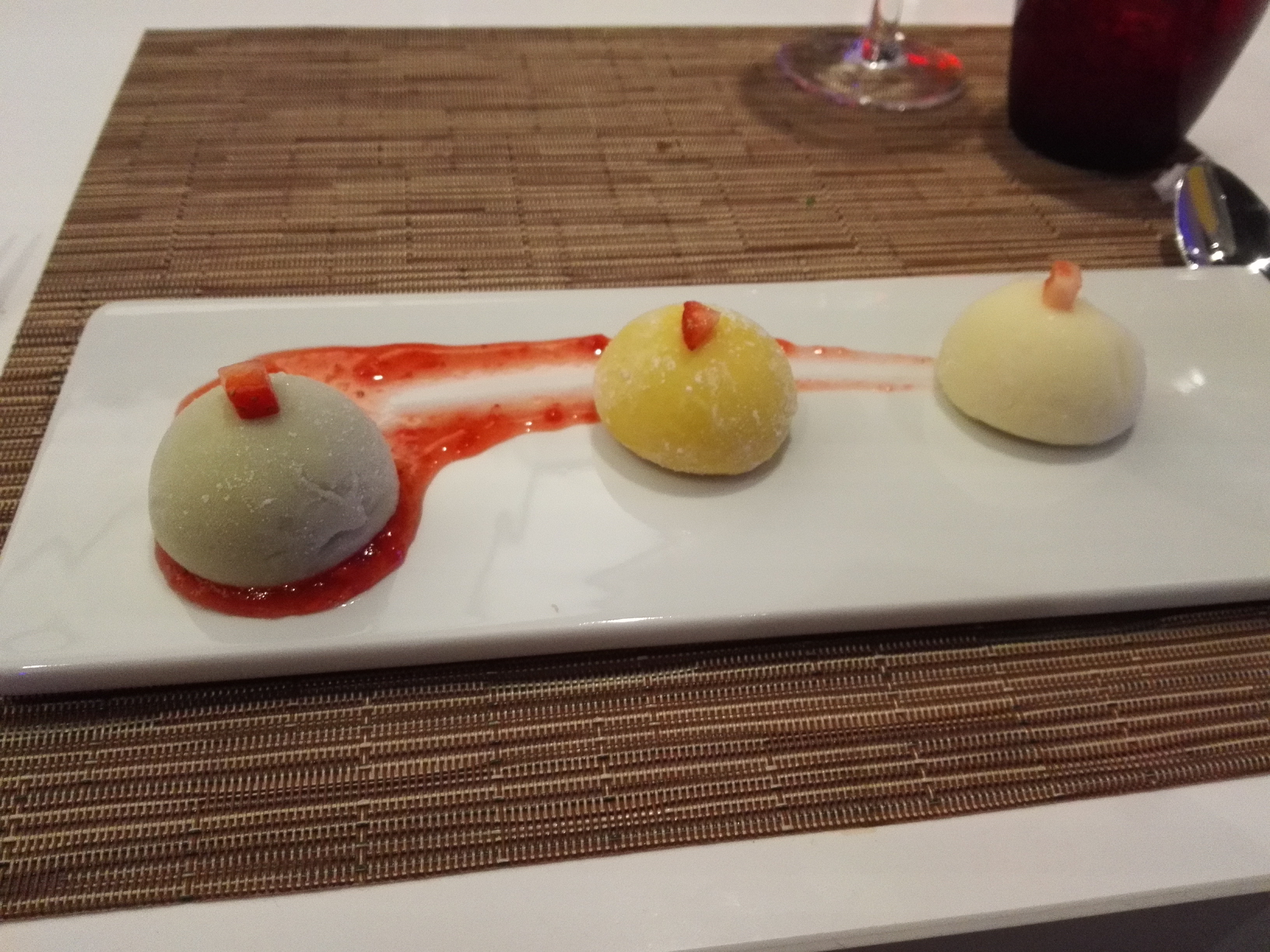 There’s even a transparent viewing pod that gives you panoramic views of the ship and the sea around it, called the North Star. Sadly it was out of order when we were due to try it, but it looks a lot like the London Eye for ships:

We did try the chandelier that displays your heartbeat in lights, though – here’s me worrying that I was dead inside because it didn’t kick in immediately!

If my heartbeat looks a little quick, maybe it’s because it speeds up when you’re in love. And I really, really loved the Anthem of the Seas. Same time next year…?

The Royal Caribbean Anthem of the Seas is sailing from the UK until October and is available for booking now.

One thought on “We took a trip on Anthem of the Seas, a ‘smart’ new cruise ship with robot bartenders”