If you’re in the market for a new Android flagship, there are two main candidates fighting for your love right now: the Samsung Galaxy S6, and the HTC One M9. So which one should you buy? We’ve compared all the most important aspects of the two phones, including a head-to-head camera comparison, so you can make the right choice.

Note: we’re using the Samsung Galaxy S6 Edge to compare with, as we much prefer it to the standard S6 – but most of the same points apply to the vanilla S6. The main difference is the slightly larger battery on the Edge (2550 vs 2600 mAh) and, of course, that double-curved screen.

Both handsets have a lot going for them aesthetically, but the M9 wins it for us. Crafted from a single piece of aluminium, the M9 body seamlessly changes colour at the edges (on the silver/gold version, in any case) and generally looks like a precision-manufactured thing of beauty. 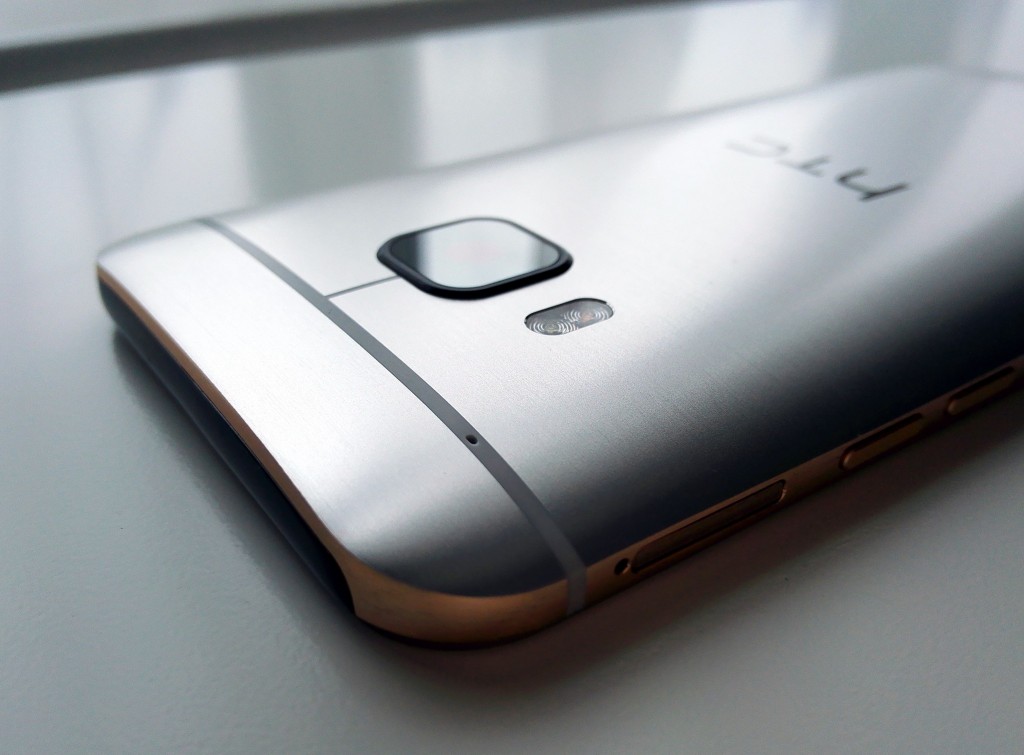 It feels weighty and premium, nestles comfortably in your palm, and despite being smoother than silk, never feels droppable or slippery. The back does attract fingerprints, but that’s also the case for the S6, whose pearlescent plastic body is coated in Gorilla Glass 4 (yes, even on the back). 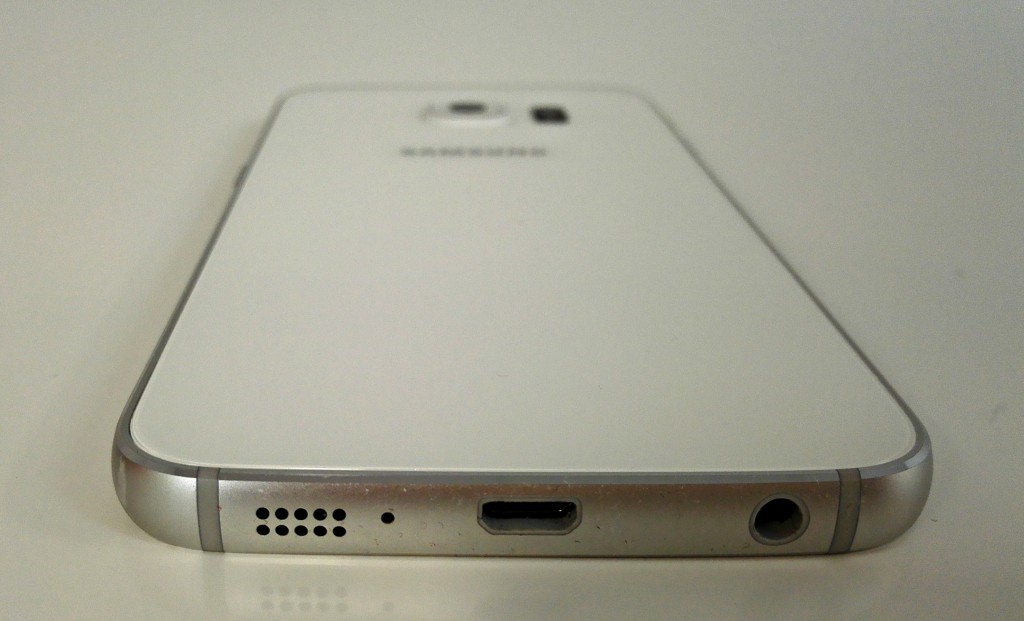 The M9 comes in gold on gold, gunmetal grey, and gold on silver, with a pink version glimpsed at the launch event but not seen since. We’re expecting it to appear soon as a carrier exclusive. Similarly, the S6 Edge comes in Black Sapphire, White Pearl and Gold Platinum at launch, with a ridiculously beautiful Green Emerald version seen at Mobile World Congress that we’re hoping will appear on these shores any day now. The standard S6 doesn’t have the Green Emerald edition, but it does have a similarly beautiful Blue Topaz hue. 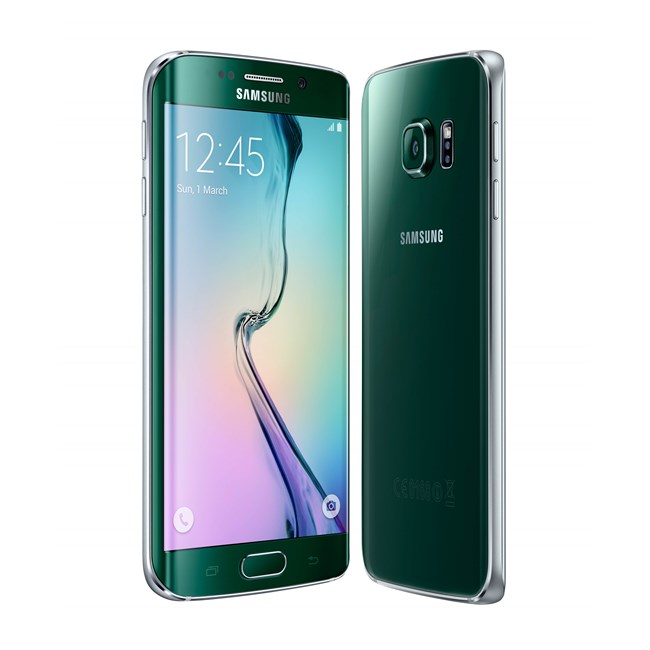 If it was between the Green Emerald S6 Edge and the Gunmetal Grey M9, we might have to change our answer to the S6. But of the options currently available, the silver/gold M9 is the clear winner.

With the immense improvements to Samsung’s TouchWiz interface, the S6 offers a considerably better experience than previous Samsung phones, with less bloatware and fewer interruptions to the Android experience. The new screen-off animation and double-tap camera launch are nice touches, too.

Meanwhile, HTC’s always-excellent Sense skin has improved even further, offering context-specific app shortcuts on the homescreen (in other words, if you’re at work, it’ll show the apps you usually use at work) and adding dining recommendations through Blinkfeed. There’s also a new Themes feature that’ll create a whole matching theme for your phone – including app icons – in seconds from any photo you choose. 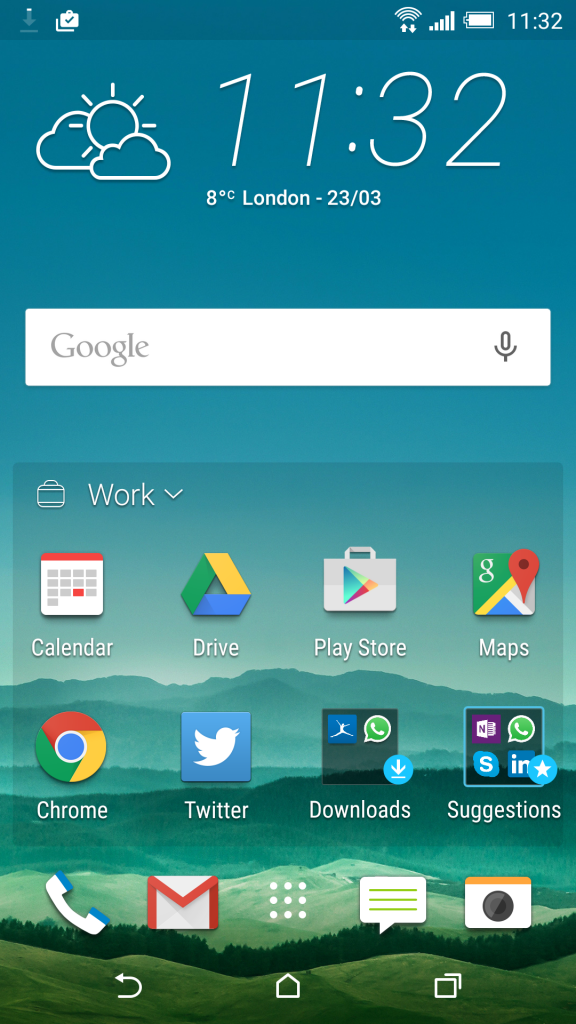 Specs-wise, both phones have a 64-bit octa-core processor: HTC uses the Snapdragon 810 and and Samsung has the Exynos 7420. Combined with 3GB RAM, both handsets offer excellent performance, but the HTC One M9 gave us no issues at all except for a little warming-up, while the Samsung had a couple of minor lags during intensive use.

As for storage, the S6 Edge comes in 64GB and 128GB versions, which is plenty of space for most people, but sadly doesn’t have a microSD slot (the removable battery’s gone, too). The M9 only comes in 32GB, but has a microSD slot that can add up to 2TB (assuming you can find a microSD card of that size, because we can’t!), and again, the battery can’t be replaced.

We also found that the S6 Edge screen could be tricky to use with some apps: sometimes important buttons happened to sit exactly where the corners of the screen were, which made tapping them harder than it would be on a flat screen. Overall, then, the M9 wins this one. But it’s close.

Absolutely no contest in this category. Even if you’re comparing with the non-Edge version of the S6, quad-HD is going to trample all over 1080p full HD. However, since both phones have screens around the 5-inch mark (the M9’s is 5, S6’s is 5.1), resolution is less of an issue than it would be on a larger phone: realistically, most people won’t notice much difference between the two at this size. And the HTC’s screen is bright, colourful and crisp – it’s still very, very good. 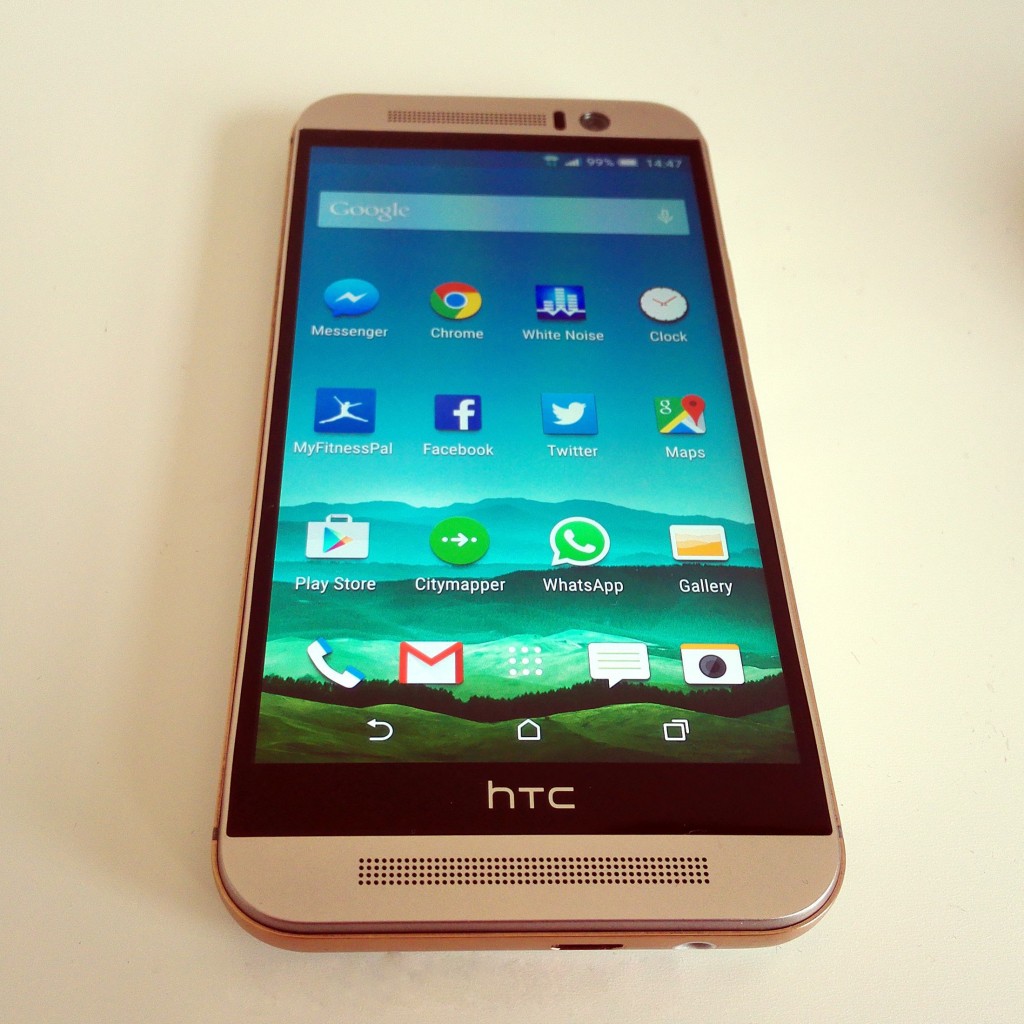 The curved screen is another matter entirely. It’s nothing short of beautiful. The curve gives it a 3D-esque look: icons seem to float above the screen, and the slight darkening at the edges when you’re looking at the phone straight-on actually makes photos and films look better. It’s like a vignette effect. 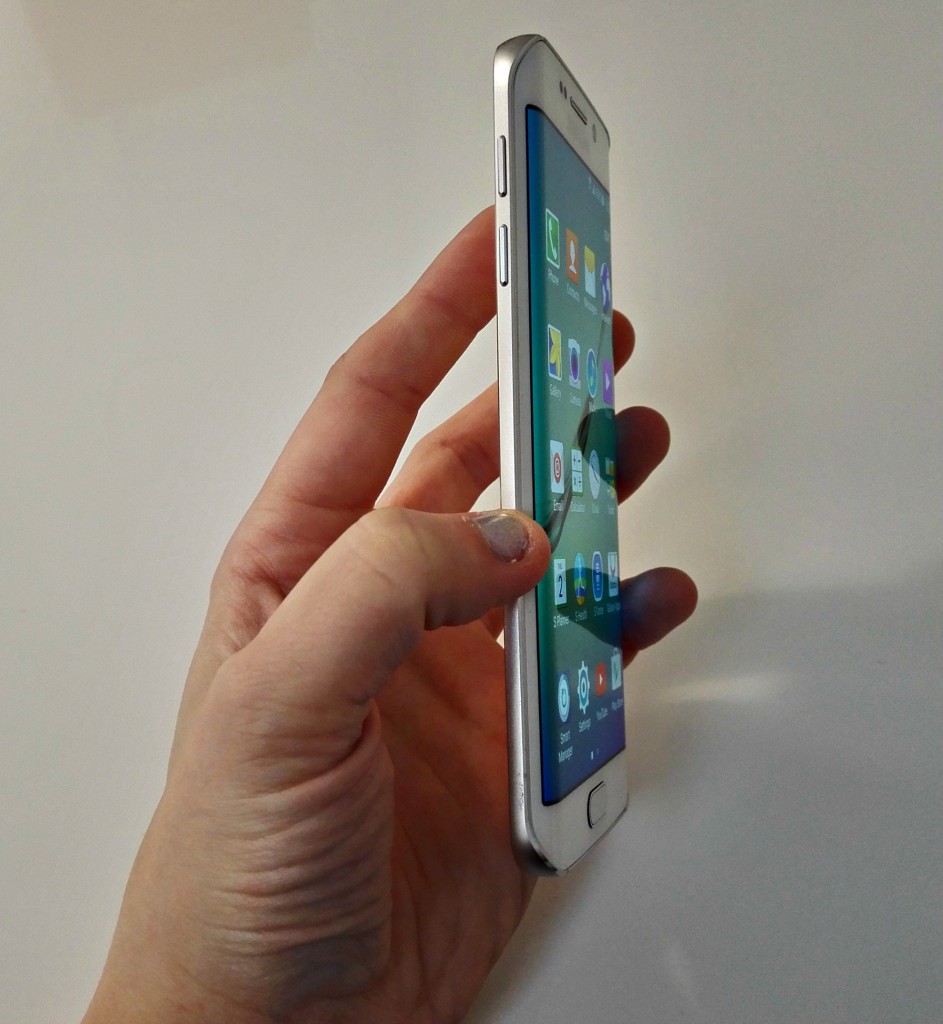 If you haven’t seen the Galaxy S6 Edge screen in person yet, photos won’t do it justice. Get to a Samsung store, pronto.

Again, the S6 absolutely walks it. This just goes to show you can’t trust the megapixel rating of a phone to give you a clear picture of its photo quality, because the M9’s camera is 20MP while the Edge only offers 16. The photo samples speak for themselves, though.

Samsung Galaxy S6 Edge vs HTC One M9 camera samples (S6 on the left, M9 on the right). Click for bigger:

The S6 Edge’s camera also has the benefit of super-quick double-tap launch (even when the screen’s turned off or you’re using another app), and while taking the photos for this review, launching the M9’s camera felt distinctly clunky by comparison.

Selfie-wise, the S6 wins again, though it’s closer. The S6 Edge has a 5MP front-facing camera, while the M9 offers the 4MP UltraPixel camera that was the main snapper on the One M8. The One M9 does offer Eye Experience extras like photo booth and split capture, though, which you can see demonstrated in our HTC Desire Eye review.

Overall, the S6 camera is leagues ahead of the M9’s, so this is a clear win for Samsung.

Neither phone does well in this sector. The HTC One M9 offers a paltry 2840mAh, and the S6 Edge’s capacity is even lower at 2600 – the same as HTC’s previous flagship, the One M8. We were hoping to find that the phones outperformed these low-sounding numbers, possibly thanks to the improved power management offered by 64-bit processors, but we were disappointed. Neither phone lasts more than a day, and both needed a top-up before bed more than once. For a flagship in 2015, that’s rubbish.

Still, comparing just the two phones (let’s pretend 3100+ mAh phones don’t exist for a minute), the S6 comes out on top in two ways. Firstly, it lasts longer: we streamed the same HD film over WiFi on both phones with GPS on and brightness set to max, and from a 100% charge, the S6 Edge had 54% at the end of the film, while the M9 had 50%. Not a huge difference, but considering the M9’s capacity is actually higher, it doesn’t say much for HTC’s power efficiency.

The wireless charging mat isn’t included with the phone, though: ours is £39.99 from Fonesalesman.

The Galaxy S6 Edge has cool factor in spades, thanks to its beautiful, cushiony curved screen. It’s very fun to show off, and everyone who borrows your Edge spends ages just turning it one way and another in their hands to see the 3D effect. 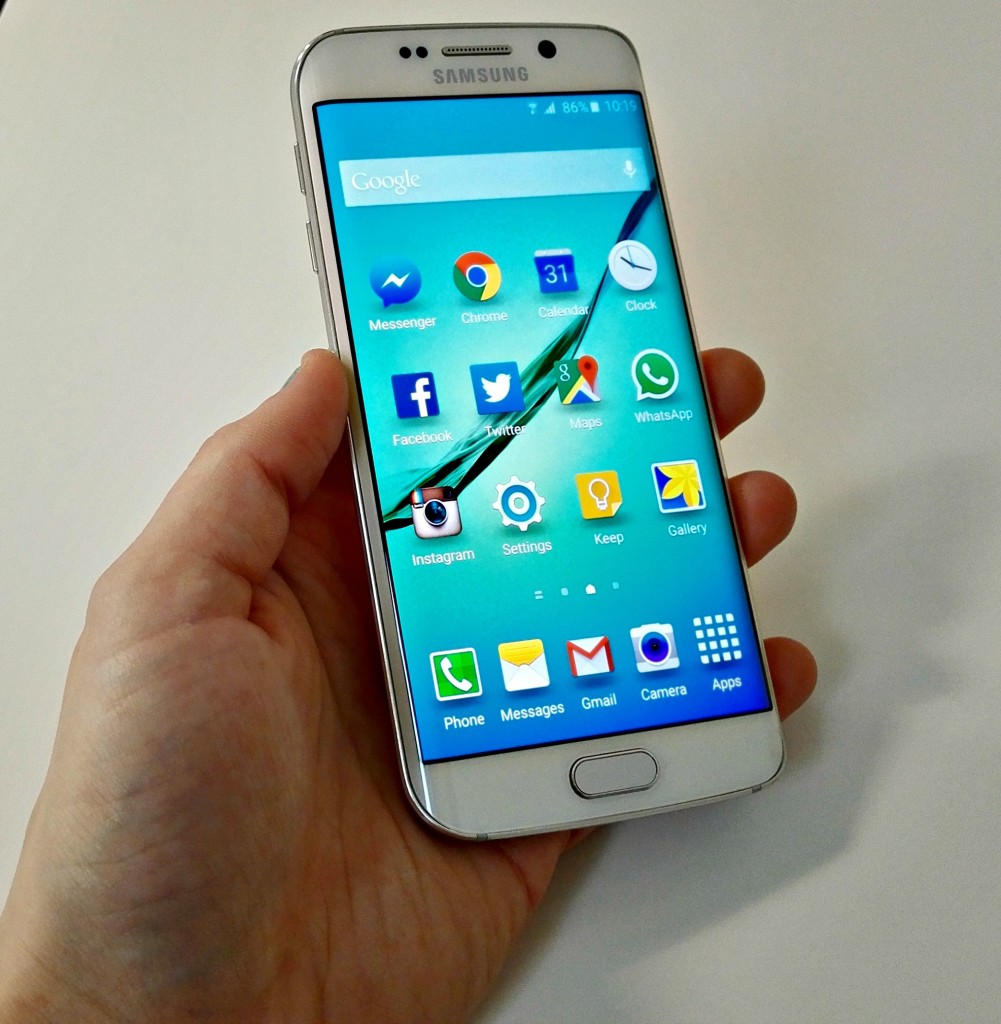 On the other hand, the HTC One M9 has the Dot View case, which is something we’ve been big fans of since the first generation of cases came out with the M8. As cases go, it’s a doozy: as well as doing all the usual boring protection stuff, it can display pictures and animations while it’s closed, you can use it to skip music tracks without opening the cover, and you can even play games directly on the closed case front. It’s very, very cool.

Still, no one buys a phone for a case, so we’re calling this one a draw.

Easiest to get your hands on
Winner: HTC One M9

One of the biggest downsides to the Samsung Galaxy S6 Edge is that it’s really, really expensive. More than an iPhone 6. More than just about any phone on the market, in fact (BlackBerry Porsche editions notwithstanding). It costs £760 SIM-free for the 64GB version, and we’re still waiting for a price on the 128. Granted, not many people buy their phones outright these days, but that high handset cost means your monthly contract rate is going to be pretty high unless you can afford to pay a big chunk of money upfront.

By comparison, the HTC One M9 is just £579.99 to buy SIM-free. Granted, you only get 32GB of storage for that money, but it’s still a big difference. The standard S6 is much more in line with the M9’s pricing: £660 for the 64GB version or £599.99 for the 32. But in our opinion, going for the less-exciting version of a really cool phone isn’t worth the saving – you don’t want to tell people about your exciting new phone, only for them to say “Ooh, the curved one?”

You can compare contract packages for the two flagships at Carphone Warehouse to get an idea of comparative prices: HTC One M9 packages are here and Samsung Galaxy S6 ones can be found here.

The verdict – should you buy the HTC One M9 or the Samsung Galaxy S6?

With 3 category wins each and one draw, the S6 Edge and HTC One M9 are pretty evenly matched:

For most users, it’s probably going to come down to price. These are both excellent phones, but when you’re looking at shelling out almost £200 more for the Edge, the M9 starts to look particularly appealing. Plus the Dot View case and expandable storage are major plus points for HTC’s flagship.

In short, if money’s no object, go for the S6 Edge – you’ll get a superb camera, stunning screen and wireless charging built-in. If you’re more interested in value for money, the HTC One M9 has equally good tech specs (except for storage, but microSD fixes that), looks amazing, and offers a top-end user experience for much less.

So, all that said, which 2015 flagship gets your vote?