As we recently reported, ‘The Psychopath Test’ author Jon Ronson has written a new book about social media shaming, and what happens to the targets afterwards.

Unfortunately for Jon, he’s getting his own taste of that at the moment, as a controversial line from the galley (unfinished review copy) of ‘So You’ve Been Publicly Shamed‘ was tweeted by freelance writer Meredith Haggerty: 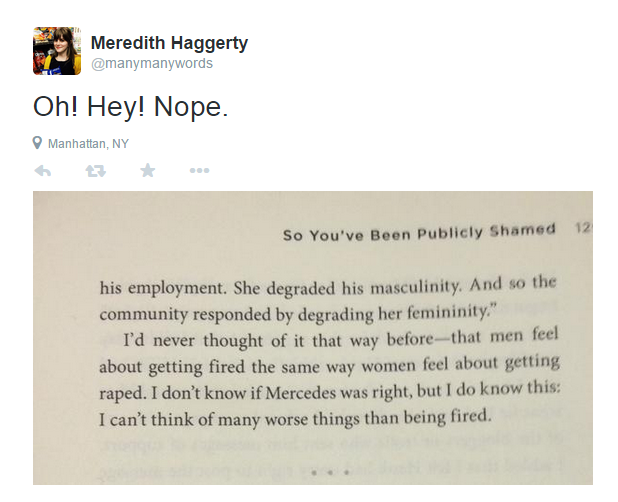 The line has caused dissent because it appears Ronson is equating rape with losing your job – something that is clearly out of line.

And nor did his assertion to The Frisky that “people I really respect said I was wrong to have that line in there, so I have to assume that they’re right.” In other words, that he didn’t change his mind about the line – he was just told it was unacceptable by people he respects, and so cut it from the final edition of the book.

Since then, Ronson has received an enormous amount of criticism on Twitter:

And has been responding to much of it, explaining that he didn’t mean rape and firing were equal – just that he was trying to think of something that’s as scary to him in his daily life as rape is to women.

As @RebeccaVBrink points out on twitter, fear of being fired is actually fear of being destitute, being thrown out on the streets and unable to feed yourself and, potentially, your kids. Again, it’s not necessarily equivalent with rape but it’s not something to be sniffed at, either.

So, in context, Ronson’s explanation actually makes a lot of sense. We’ve all said or written something that sounded completely different out loud than it did in our heads, it’s just that in this case his words were circulated to thousands of people and one of them picked up on it. He’d already cut the line from the book, but is still having to defend something he admits was poorly phrased to a baying crowd exactly like those he writes about.

Sadly, throwing stones at successful people is something of a hobby for Twitter, and Ronson seems to be suffering today:

He also refers to Sue Perkins, hounded off Twitter this morning by Top Gear fans sending her death threats:

Yes, Twitter-shaming someone for a line in a book about Twitter shaming is irresistibly ironic for some. But as always, there’s a real person behind the Twitter avatar, and this one is suffering. We hope the angry mob finds something else to rage about before long.

With thanks to Buzzfeed for the heads-up. Main image: Amazon.co.uk.