You’d think that by now, business owners would have wised up to the fact that insulting their customers on public forums is an extremely bad idea. Only last week, a Manchester restaurant was vilified after branding a party of customers “chav cheap trash” when they had the gall to complain about poor service on the company’s Facebook page.

Well, here we are again. Bedfordshire-based Christina F visited The Bell At Westoning on International Women’s Day (oh, the irony) and reports that she witnessed the male pub owner biting a waitress on the shoulder, followed by slapping her bottom and making kissing sounds when she jumped a mile at being sexually assaulted at work.

Here’s the review in full (love that title):

But the story doesn’t end there. Of course, the restaurant had to respond, and as you’ve probably guessed by now, the reply from their allegedly female manageress (posting under the name ‘Roberto’) is sarcastic, insulting and painfully anti-feminist: 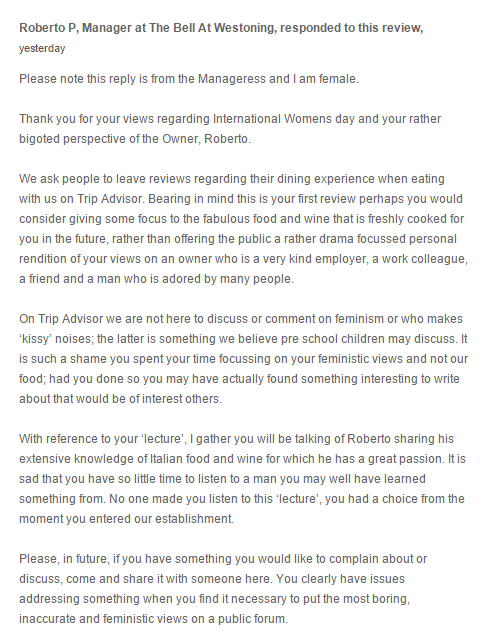 Some highlights from that epic rant:

“your rather bigoted perspective of the Owner, Roberto.”

If intolerance of male bosses who think it’s OK to put their hands on their staff is wrong, then we’re intolerant too. We’re also not keen on rude responses to completely fair reviews.

“perhaps you would consider giving some focus to the fabulous food and wine that is freshly cooked for you in the future, rather than offering the public a rather drama focussed personal rendition of your views on an owner who is a very kind employer, a work colleague, a friend and a man who is adored by many people.”

If the food is fresh, you guys, you’ve got absolutely no right to complain about witnessing sexual harassment. Seriously, have you tried the beef? It’s so good that you’d let a random man bite you on the shoulder.

“On Trip Advisor we are not here to discuss or comment on feminism”
“It is such a shame you spent your time focussing on your feministic views”
“the most boring, inaccurate and feministic views”

“had you [focussed on the food] you may have actually found something interesting to write about that would be of interest others.” [sic]

Couldn’t agree more. Sexual assault in the workplace of interest to absolutely nobody when there’s food to be had. I mean, who would care that they had to witness an employee being forcibly slapped and bitten in a restaurant? Why are they even looking at their surroundings? Just keep shovelling that food and shut up, right? Jesus christ.

We’re already seeing a backlash to this extremely ill-advised reply on Twitter – here’s hoping for an apology before long. And hopefully a lot less grabby-hands in the workplace.