Films like Ex Machina have portrayed AI as being all about superintelligent cyborgs when the reality is nothing of the sort and hopefully never will be. Chris Price reports

Think artificial intelligence and what springs to mind? Chances are it’s a scary apocalyptic film like Terminator where robots rise up and threaten to kill all of mankind or the recent Ex Machina where a beautiful female robot attacks her reclusive billionaire master before escaping to join the real world. Then there’s HAL (just one initial away from IBM), the creepy sentient computer in 2001: A Space Odyssey, who kills crew members to prevent having to lie to them about the purpose of their mission.

Probably your positive feelings towards Artificial Intelligence (AI) weren’t helped recently either by the comments of Professor Stephen Hawking who said bluntly in an interview to the BBC in December: “The development of full artificial intelligence could spell the end of the human race.” Nor has he been the only one to voice concerns about AI recently. Even Microsoft founder Bill Gates chipped in with a few of his own comments: “I am in the camp that is concerned about super intelligence,” said the Microsoft founder. “First the machines will do a lot of jobs for us and not be super intelligent. That should be positive if we manage it well. A few decades after that though the intelligence is strong enough to be a concern.”

One Oxford philosopher Nick Bostrom has even gone so far to say that Artificial Intelligence has the capability to bring about human extinction because machines with potential ‘superintelligence’ could be capable of independent initiative which might not have our best interests at heart (you can see his paper on super intelligence here). He predicts that AI machines with superintelligence will arrive in the first third of the next century.

Tellingly, one London AI company DeepMind which was bought by Google last year even insisted that part of the £500 million deal with the search giant should include the formation of an AI Ethics Committee – perhaps anticipating trouble up ahead. And last year it was announced that a computer algorithm had become the first example of AI to pass the ‘Turing Test’. Developed by World War Two codebreaker and computer pioneer Alan Turing, the test is a benchmark for machines displaying intelligent behaviour indistinguishable from that of a human. Eugene, as the computer algorithm was named, was able to convince 33% of judges that it was actually a 13-year-old Ukrainian child. OK that’s still a little way off mimicking a full-grown adult but it’s an impressive achievement nonetheless.

But before you start to panic that we really are on the verge of massive apocalypse in which the robots take over, it’s perhaps worth bearing in mind that what we have now is a much diluted form of AI – often referred to as Artificial Narrow Intelligence (ANI) or Weak AI. This is the kind of AI which is restricted to a specific task. For example, ANI is used widely in e-commerce by companies to try to ‘upsell’ you when you buy a product. One application of this is Amazon with its ‘People who bought this also bought’ box (though I did once get recommended a pair of rubber gloves for doing the dishes after buying a Susan Boyle CD for my Dad).

It’s also used increasingly both in the home (Nest, the heating control system now owned by Google learns your preferences and responds to them) and in your car, working out when to apply the anti-lock brakes. The future generation of self-driving cars, including Google’s self-driving car, which is being tested now, will contain even more robust ANI systems that allow it to perceive and react to the world around it. 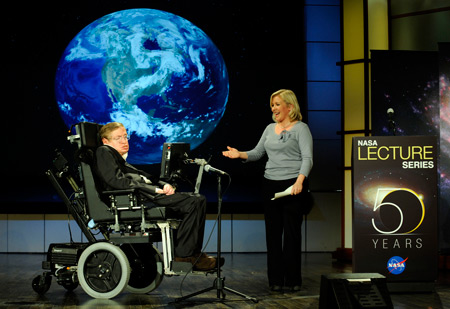 Professor Stephen Hawking, above, has expressed concerns about Artificial Intelligence

Similarly your mobile phone is a veritable feast of ANI tools, from predictive text through to Google Maps and, of course, Apple’s personal assistant Siri. SwiftKey’s predictive text technology is even used by Stephen Hawking himself, learning how the professor thinks and suggesting the words he might want to use next. Says Ben Medlock, cofounder and CTO of SwiftKey: “The problem SwiftKey solves is the hassle of typing on mobile phones. We use AI to learn from individual users; our apps understand the way people use language and continually adapt, auto-correcting even the most unique words and phrases and predicting what you’ll type next.” He adds: Our algorithm learns from and adjusts to your writing style, even if you’re juggling up to three languages simultaneously.”

So it’s fair to say none of these consumer applications for Artificial Intelligence come anywhere near to the sci-fi portrayal of superintelligent humanoids we are all familiar with. Yet. Even Siri which was hailed as a major step forward in Artificial Intelligence when it launched in 2011 is still a long, long way off ‘superintelligence’, restricted to carrying out basic commands such as setting the alarm, making a call or checking out a reference on a website. However this could soon change with a small group of engineers from Viv Labs currently working on a more advanced of Siri. “Siri is chapter one of a much longer, bigger story,” Dag Kittlaus, one of Viv’s co-founders recently told Wired magazine. Kittlaus, whose team was also responsible for the ‘first chapter’ of Siri, is developing a new customer-friendly assistant which they hope will become embedded in a raft of devices and will connect users to what is being described as a ‘global brain’.

Unlike the current generation of personal assistants – including Siri, Microsoft’s Cortana and Google Now – Viv Labs’ new version of Siri, Viv, will be able to link information together to offer practical solutions. For example, with the current generation of personal assistants you can ask a question like where was Tony Blair born and what is the population of a city, but you couldn’t get a response to the question ‘What is the population of the city where Tony Blair was born?’ With Viv it will be able to piece together information from different sources to provide an intelligent answer to complex questions. What’s more, it will constantly learn from its owner’s behaviour to offer solutions. So, for example, you could say ‘I’m drunk’ and Viv will know where you are and order a cab to pick you up from that location.

Of course, not all applications of AI will be so well meaning as advanced personal assistants helping to get you back to your own bed at 2 in the morning! Perhaps more worrying are the autonomous machines which are already being used to help with US military campaigns. While the US prohibits fully-automated lethal robots, the Navy is developing semi-automated drone bots that can swarm enemy targets. It’s also understood that the US Army is working on automated convoys to deliver supplies in a war zone.

Another area where AI is expected to play an increasing role is in medicine. One of the apps that IBM is currently working on for its AI supercomputer ‘Watson’ is a medical diagnosis tool which can predict the likelihood of a particular disease given the symptoms you tell it (Watson was originally developed to win the game show Jeopardy! against human contestants, while its predecessor Deep Blue took on chess champion Gary Kasparov and won a six game match).

Although the technology isn’t yet available to patients directly, IBM provides access to Watson’s intelligence to partners, helping them to develop user-friendly interfaces for doctors and hospitals. Speaking to Wired magazine, Alan Greene, chief medical officer of Scanadu, a startup that is building a diagnostic device inspired by the Star Trek medical tricorder, said he thinks that AI represents the future. “I believe something like Watson will soon be the world’s best diagnostician, whether machine or human.”

While some may see developments in AI as apocalyptic, it’s clear the technology has huge potential to benefit our lives and mankind as a whole – as long as it used properly. The key is to put the safeguards in place now to prevent the sci-fi scenarios of superintelligent cyborgs taking over the world. In other words we need to control the bots to make our lives easier, not the other way round!