At ShinyShiny, we like to give devices a good, proper, hands-on review before we give an opinion. So I’ve been using the ASUS Transformer Book (model T200TA-CP004H) as my main work computer for more than a month now, testing not just first impressions but how it actually performs, day-to-day, when you’re relying on it. I even took it to Las Vegas and carried it around CES every day, using it to write stories from the show floor.

So, how did it do? Pretty well, on the whole…

The lid of the laptop is a matte navy plastic with ASUS’s signature concentric circles design, and a shiny logo. The screen bezel is black, and the keyboard black and silver. Nothing too exciting here, but it’s smart and sleek enough to use for work. 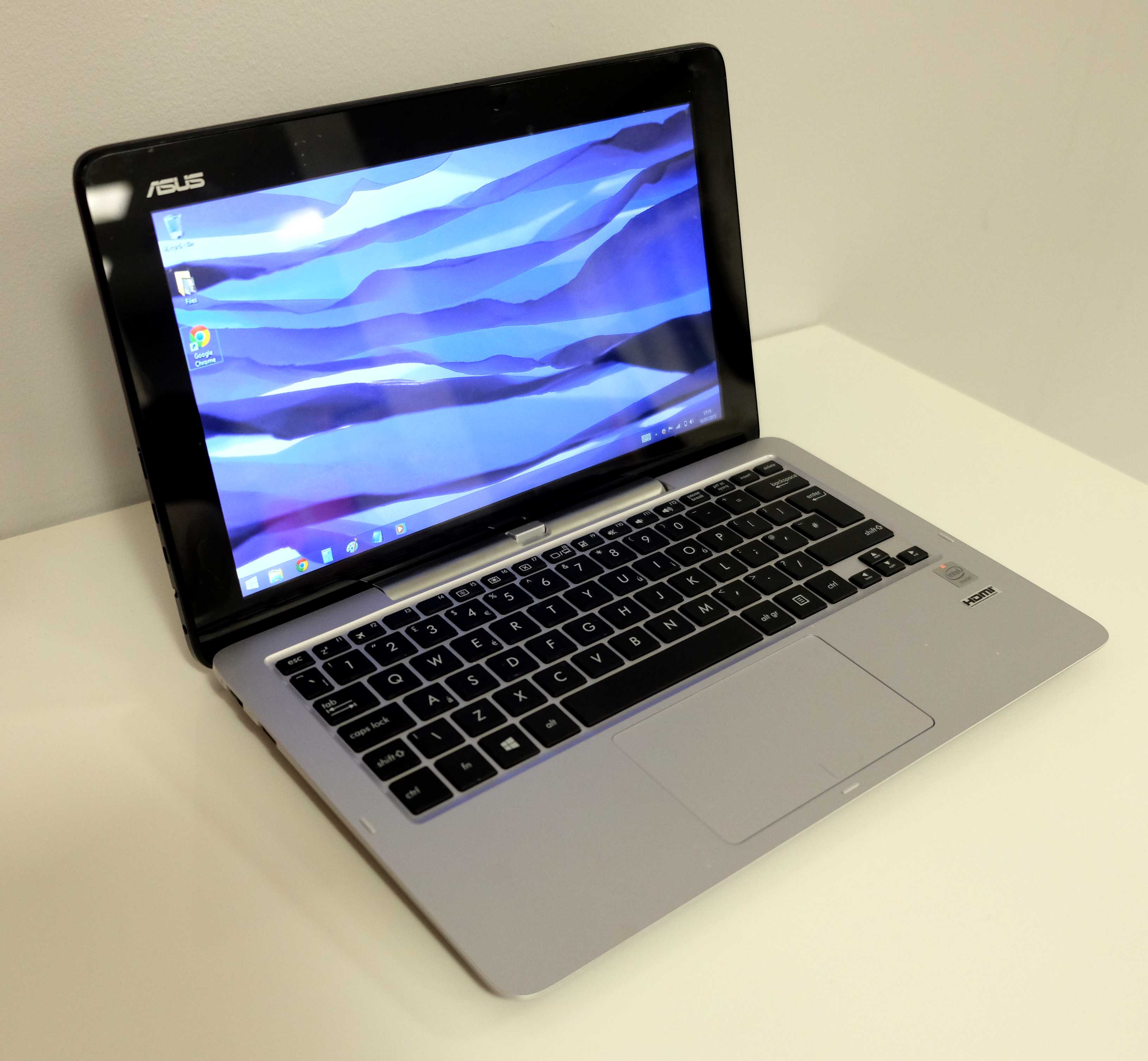 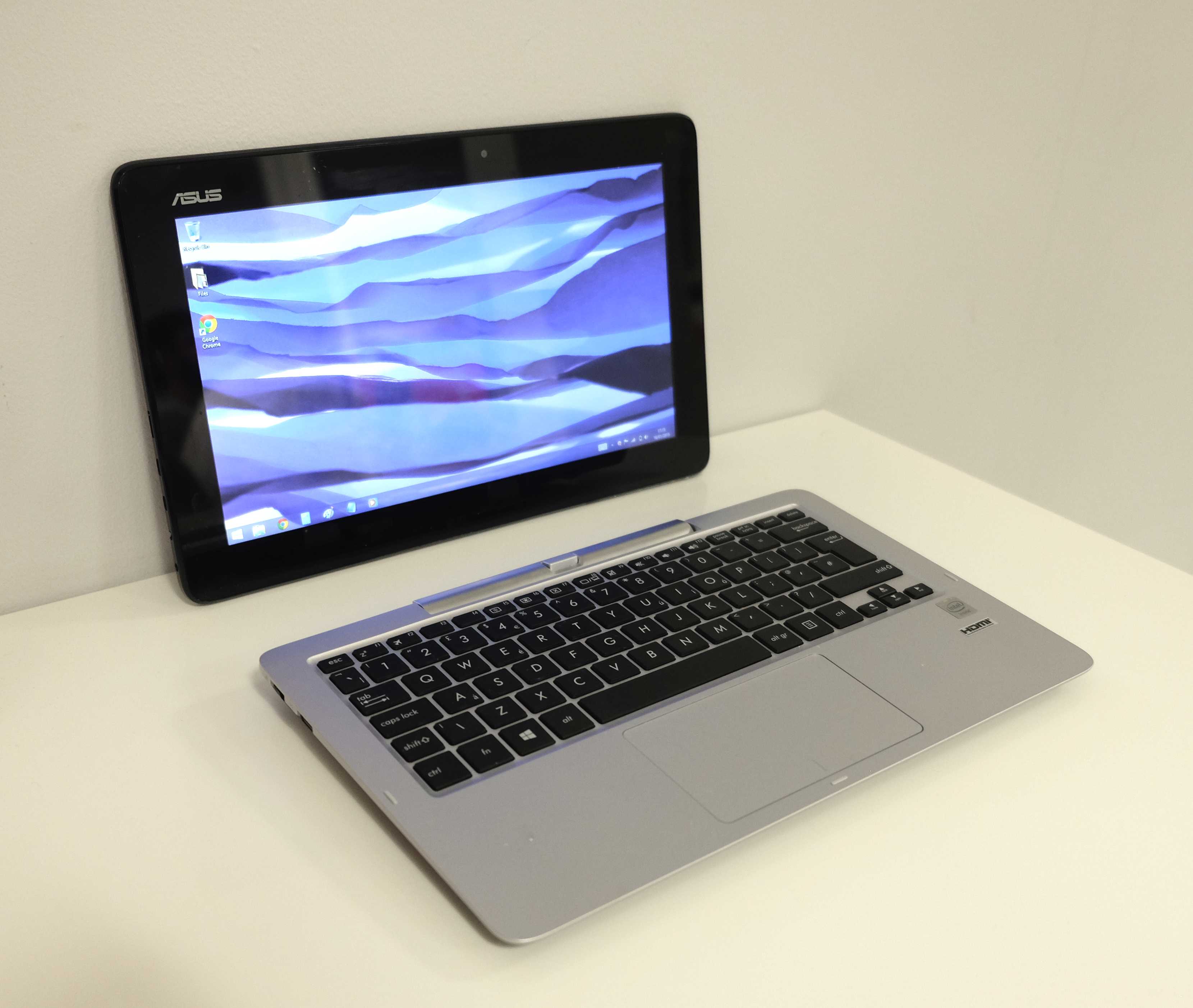 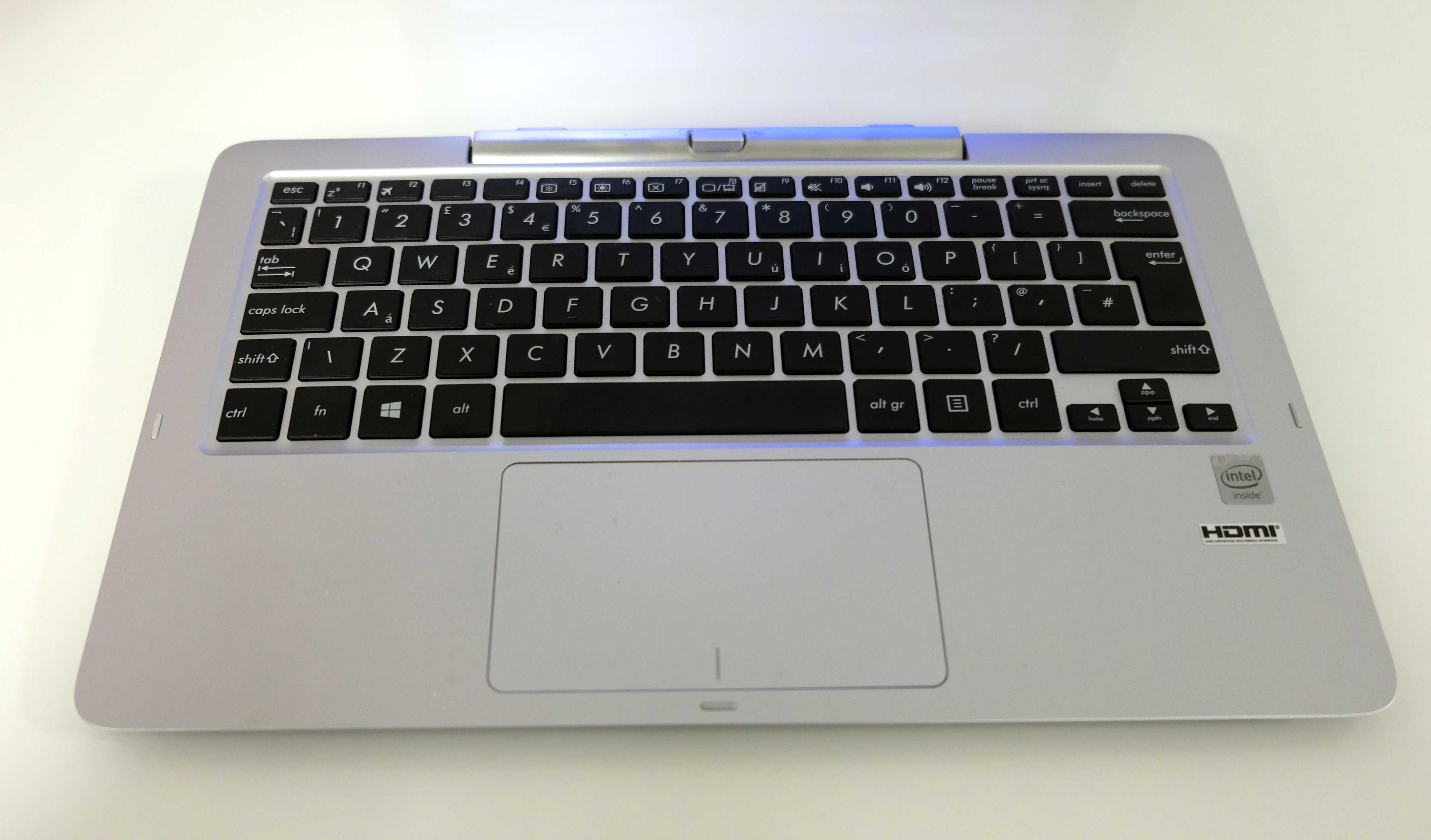 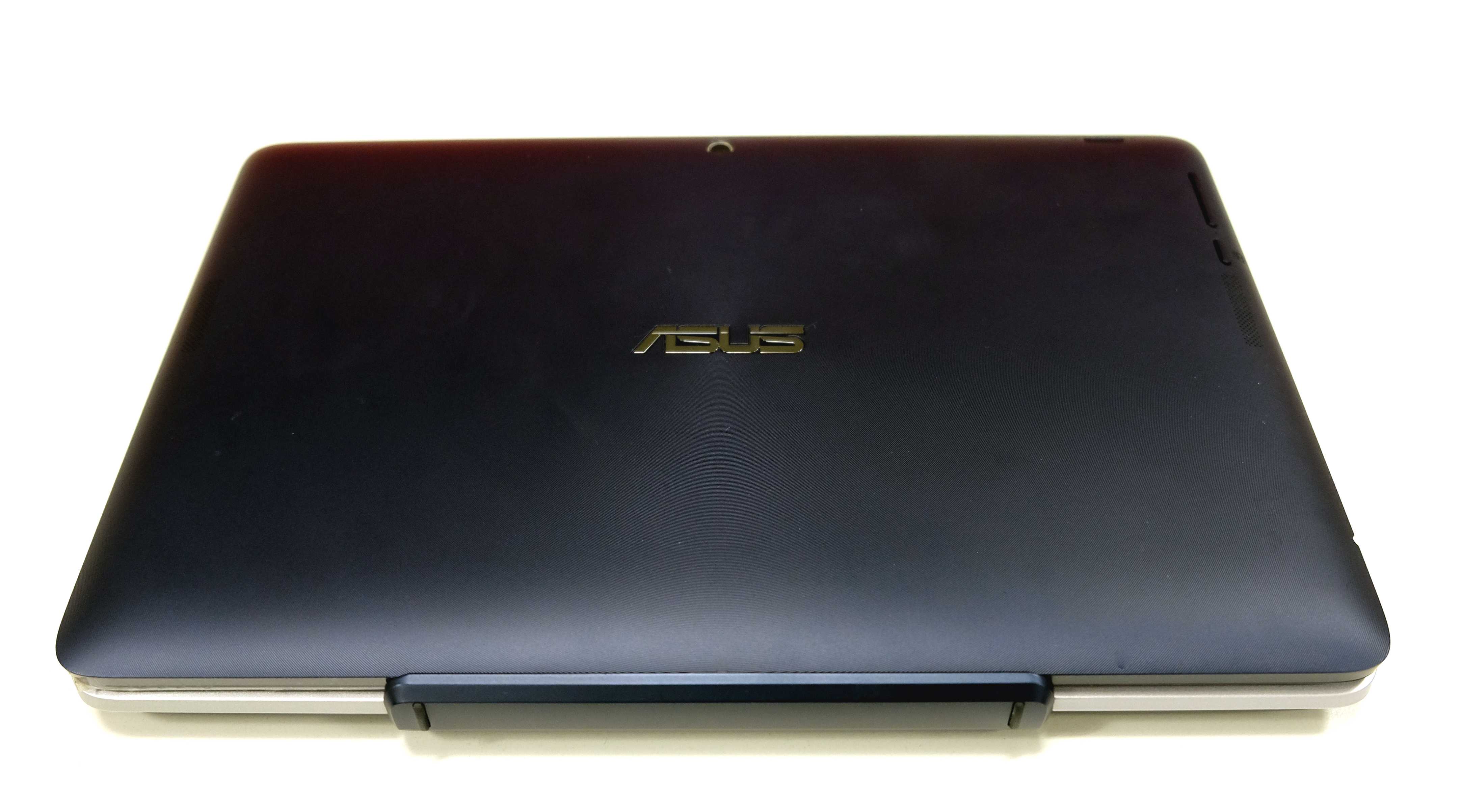 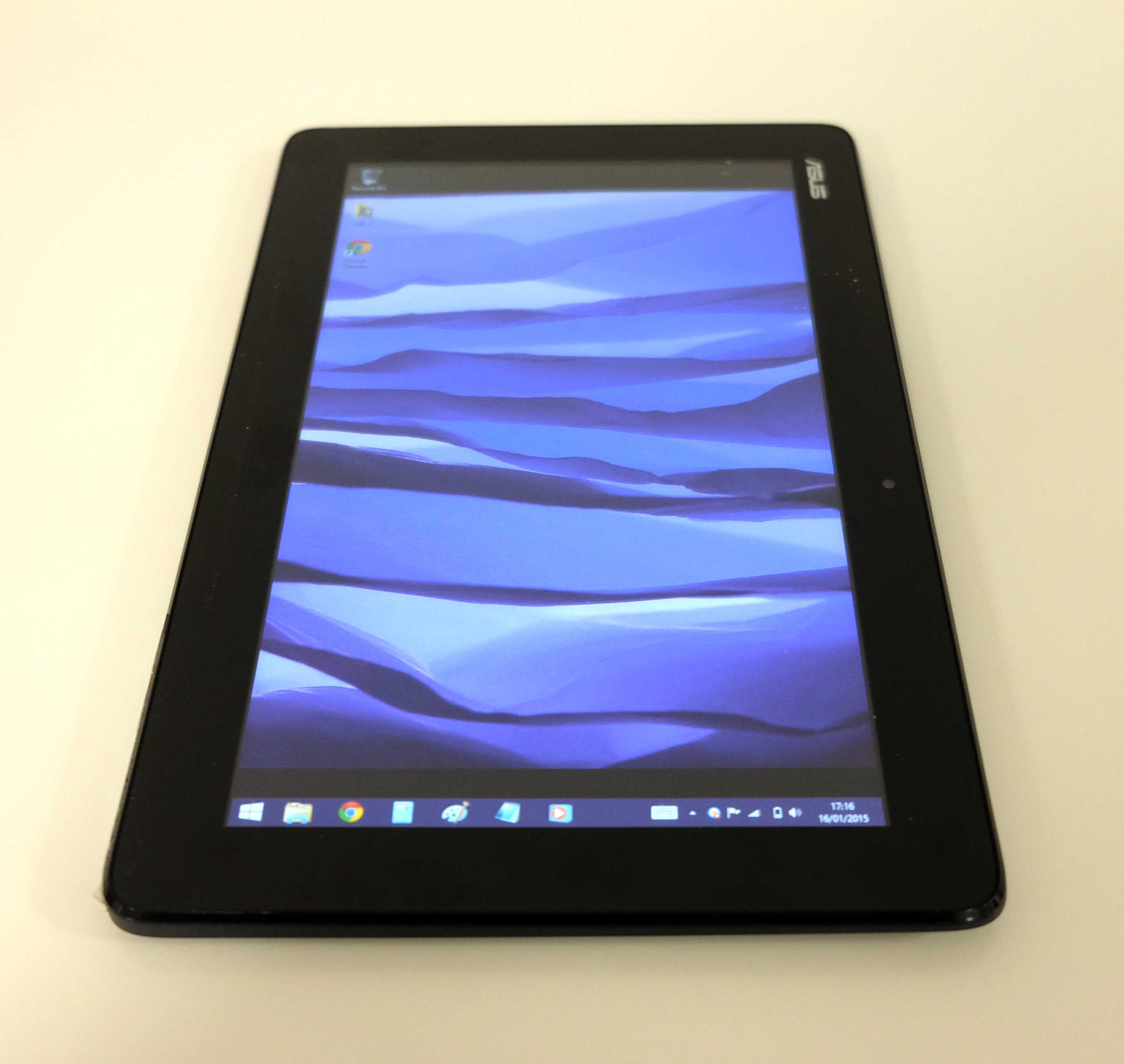 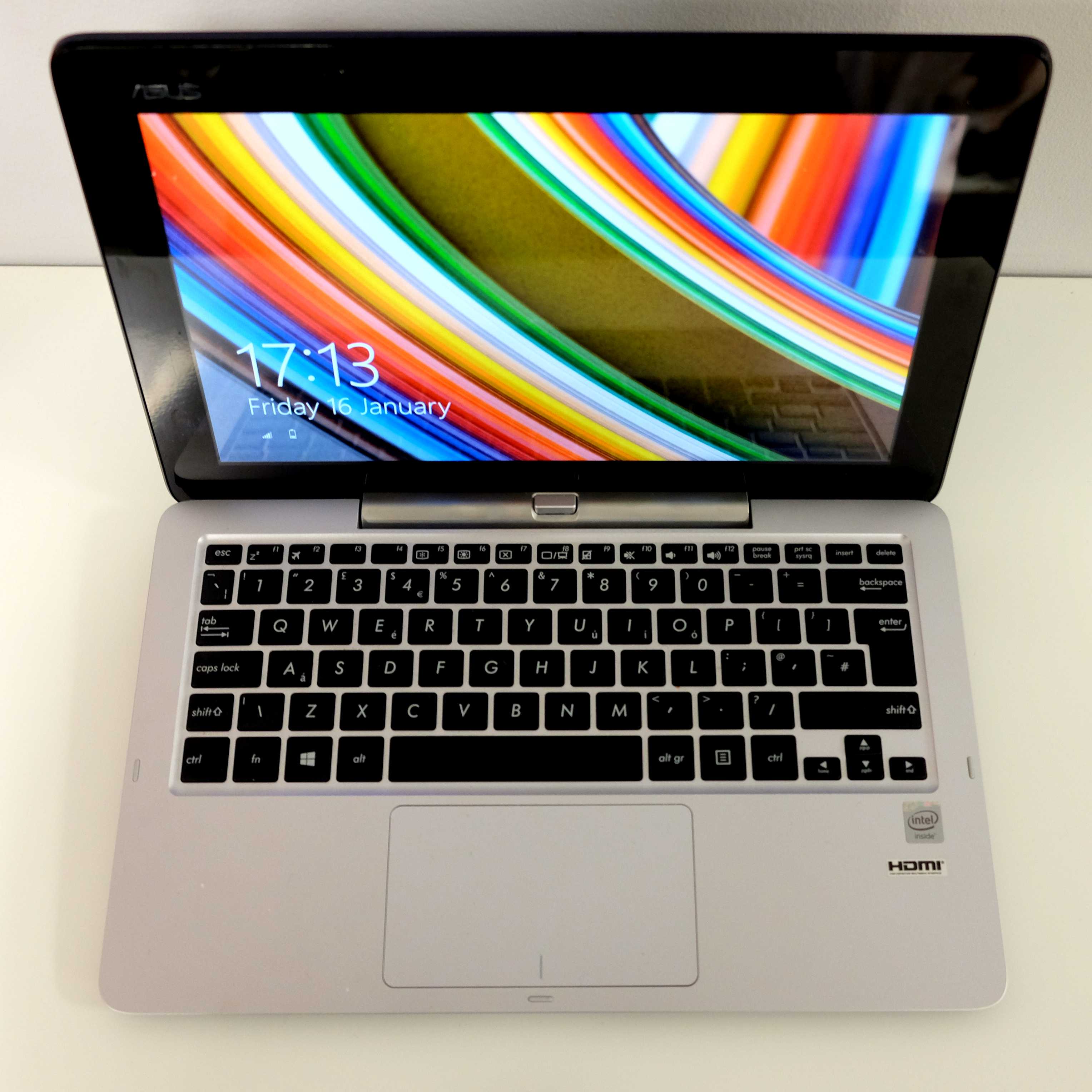 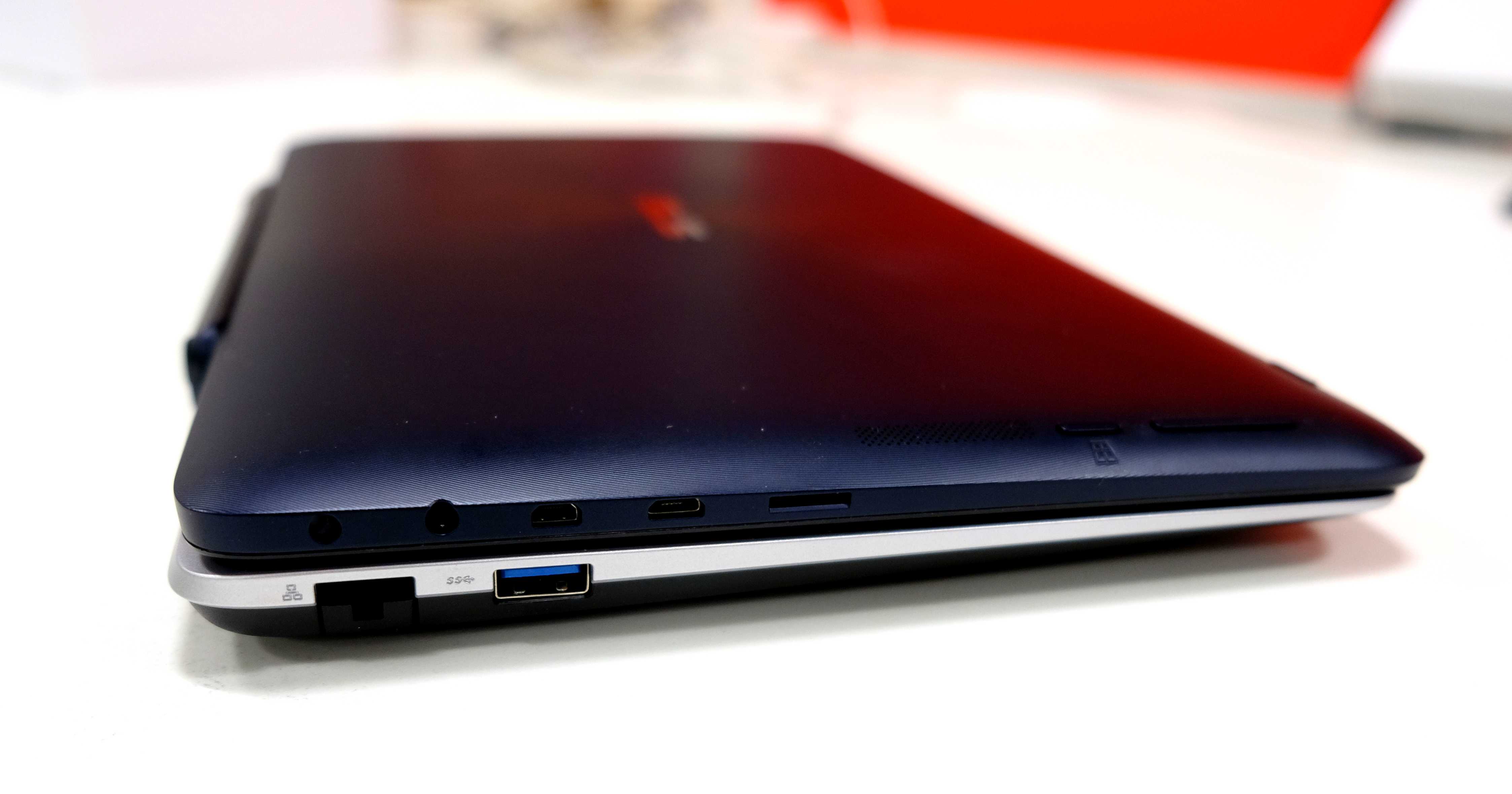 The body includes 2 USB ports (one USB 2.0 and one 3.0) and compact ethernet, while the screen portion has a micro SD slot, headphone jack, micro-USB and micro-HDMI inputs, and the power socket. There’s a touchpad and front and rear-facing cameras, too (2MP and 5MP respectively), which are a bit grainy but usable. The selfie cam records a little before and after the photo, so you can turn the dial to pick the exact moment you looked your best. Here’s a sample shot:

The ASUS T200TA is heavier than I expected. That’s not to say it’s heavy for its size, I think I’d just got used to carrying around the 10-inch Acer Aspire Switch 10, which weighs 1.2KG as opposed to the T200TA’s 1.6. That’s fair-ish given that the T200 is 1.5 inches bigger, but it still felt quite heavy after a day dragging it around CES. It’s not the slimmest, either: about 1cm at the thinnest end and a full 2cm on the thicker side.

That said, the construction is solid and robust, and the T200TA definitely feels like it can stand up to being ported about – I’ve taken it just about everywhere, including abroad, and it hasn’t sustained any damage. I wouldn’t mind betting the Transformer Book could withstand a drop or two, too, but thankfully I haven’t had the opportunity to check that.

The T200TA’s screen is a 1366×768 HD IPS panel. In short, that means the quality is excellent and viewing angles are wide. So wide, in fact, that I haven’t noticed any darkening at all when viewing the screen from different angles – even standing above my desk. Given the size, the price and the fact that it’s multi-touch enabled, it’s pretty good.

Detaching the screen from the keyboard involves pressing down a big silver button, and wrenching the screen free. I say ‘wrenching’ because while it’s not difficult, you do need to put some welly in. You definitely can’t do it one-handed, as you can with the magnetic hinge on the Acer Aspire Switch 10. It’s easier if you pull up from one side, then the other, rather than trying to pull the whole thing off in one go. Clicking the screen back in requires a knack, too – but you’ll know when you’ve done it correctly because Windows will make the happy ‘device found’ noise. It takes about 10 seconds before USB peripherals plugged into the bottom half work again.

Being able to pull your screen off at a moment’s notice has been really useful while I’ve been using the laptop at work. Rather than gathering your colleagues to see the thing you’re looking at, you can just pull the screen off and hold it up. I’ve also started taking just the tablet portion to meetings rather than the whole shebang – it’s great to have a tablet that has all my work documents on it without needing to sync. It’s definitely a format that works well for business.

Windows 8.1 was designed for touchscreens, so it performs well on the Transformer Book in both laptop and tablet mode. Sometimes, though, other programs get confused – image-editing app Pixlr, for instance, pops up the huge on-screen keyboard every time you try to do anything involving text (even when the keyboard’s plugged in), and runs as an app rather than a program (ie. the window can’t be minimised or shrunk): 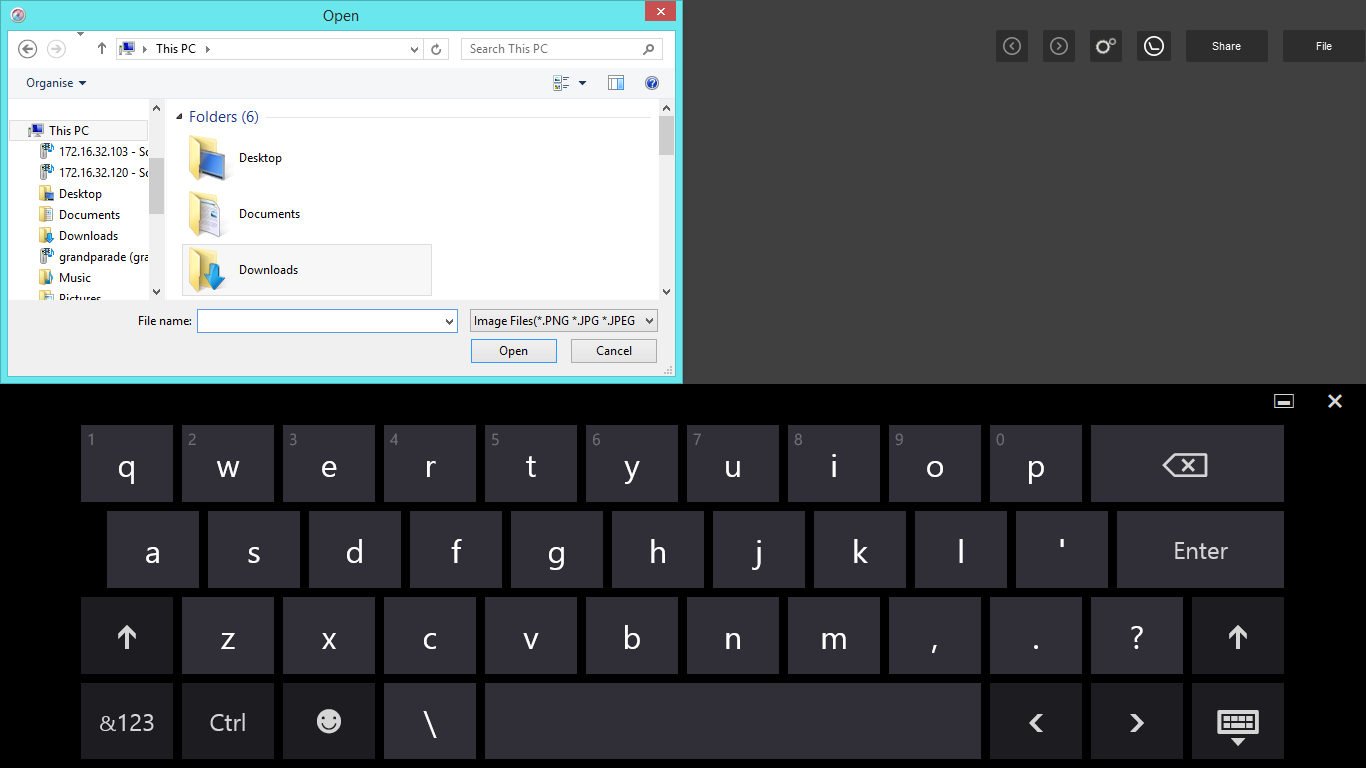 Similarly, some websites gave me the mobile version, assuming I was on a tablet. This was pretty rare though, and for the most part everything ran as normal in laptop mode.

In tablet mode, everything worked as normal, but with touch. The accelerometer is a little slow for auto-rotating the screen between portrait and landscape, but it’s accurate. The on-screen keyboard pops up more often than it’s needed, which is a bit frustrating when it takes up a third or half the screen (depending on rotation). While it’s it’s very easy to type on, it’d be nice to have the option of swipe-typing too.

It feels a bit strange to be using full-blown Windows on a tablet, but you get used to it quickly, and it’d probably actually be better for someone who uses Windows but hasn’t used a tablet before (older users, for instance).

The Transformer Book’s screen is, of course, pretty big for a tablet at 11.6 inches. Most tablets are between 7 and 10. But again, when you’re using it for work, that’s not necessarily a bad thing. It’s slightly taller and a fair bit less wide than a sheet of A4 paper, so if you can fit an A4 notepad in your bag, you’ll be fine carrying this around.

The biggest drawback of the ASUS T200TA for me is the physical keyboard. It’s not terrible to type on, although obviously not as comfortable as larger laptop keyboards, but the bigger issue is its performance. For some strange reason, 9 times out of 10 the Ctrl and other function keys just won’t work. You really have to hammer them before whichever key you’re trying to combine with – I’ve lost count of the number of times I tried to paste something and just got a V.

Also, twice now I’ve managed to accidentally, unknowingly activate Num Lock, which turns part of the keyboard into a number pad. I still don’t know how I did that, and there’s no obvious way to fix it, so one minute you’re typing normally and the next you’re getting 0 instead of O and y0ur t3xt l00k5 l1k3 it was written by a 13-year-old. It’s infuriating, especially since there’s no Num Lock key to fix it. I eventually had to consult a YouTube video to find a workaround to get my keyboard back to letters – and the fact that so many of these videos exist suggests it’s a common problem.

If you’re going to use this as your work machine, I’d suggest adding a physical keyboard (and a mouse) to get around the issue when you’re at your desk.

Another reason the T200TA-CP004H model specifically is great for work is that unusually for a convertible laptop, it comes with a 500GB hard drive. As long as you’re not doing intensive image or video editing or anything like that, the combination of half a terabyte of HD space and 2GB RAM should be plenty. I only ran out of memory when I was doing things like trying to view a lot of large images and videos from a connected phone, which required loading each one into memory before it could be played back.

Performance, driven by the Intel 1.46GHz quad-core processor, is mostly good. It gets slow at times, particularly when editing video or using a lot of Chrome tabs, but it’s more than good enough for most tasks.

The hard drive space on this model makes it really stand out from its competitors. The closest-priced Acer Aspire Switch 11, at £329.99, comes with just 32GB. It’s a little lighter at 1.5KG, and £20 cheaper, but we think it’s more than worth the extra two tenners for another 468GB of disk space! Other fully detachable laptops either offer a similarly pitiful amount of space (the HP Pavilion x2 at £250 also has 32GB) or cost a heck of a lot more (the Toshiba Satellite Click 2 Pro and Sony Tap 11 have 128GB solid state drives, but cost £900 and £800 respectively). A Microsoft Surface Pro 3 with 512GB will run you an eye-watering £1,649 – although it does also come with 8GB RAM and other improved specs for that.

To get a similar amount of storage, you really have to look to the non-detachable convertibles, like the £329.99 Toshiba Satellite Radius 11 (500GB) or £384 Lenovo Yoga 2 (also 500GB). You can use these kinds of convertibles in ‘tablet mode,’ which means flipping the screen back over the keyboard portion so the screen’s on top, but obviously that’s a lot bulkier and heavier than just the screen portion.

ASUS, then, are offering a pretty good deal with their 500GB full convertible at £350.

The lifespan of the ASUS Transformer Book on battery is very good. However, it doesn’t come close to the advertised figures. I’ve tested this three times now, taking a fully charged T200TA off charge and using it for normal work activities (writing, browsing – nothing intensive). All three times, the battery lasted just over 5 hours before it got desperate for charge. That’s pretty good – but ASUS are advertising 10 hours. It’s possible if you just left the laptop alone for 10 hours, it’d stay switched on (though it goes into standby pretty quickly), but you can’t actually use it on battery for that long. It’s a shame, really, because the battery life is actually very good for such a small, inexpensive machine – there’s no need to inflate it. I’d really like to know how ASUS came to the 10 hour figure.

I’ve had very few problems with the ASUS Transformer Book T200TA. The main one was the keyboard, which was infuriating until I brought my mechanical USB keyboard to work and plugged that in. Honestly, you should probably do that anyway, because laptop keyboards are universally terrible for typing 7 hours a day. Plus mechanical keyboards are just so enjoyably clicky. Click click click.

The Transformer Book is a little heavier than I’d like, and the occasional intrusion of the massive on-screen keyboard is irritating, but on the whole this is a great little machine for anyone who works both in and out of the office. It’s very affordable at £350, and considering that includes a 500GB hard drive, you really can’t go wrong. If you’re using it as your main machine, as I have, I’d recommend adding a USB keyboard and mouse for desk use – and possibly a USB hub too, because that’ll take up both your slots.

As a tablet and as a laptop, the ASUS Transformer Book T200TA-CP004H performs ably and intuitively. The option to detach the screen for meetings is endlessly useful, and the battery lasts a good five hours without a charge. Plenty of time to write this review and a few more to boot.