Because these are slightly easier than giving up cheese. 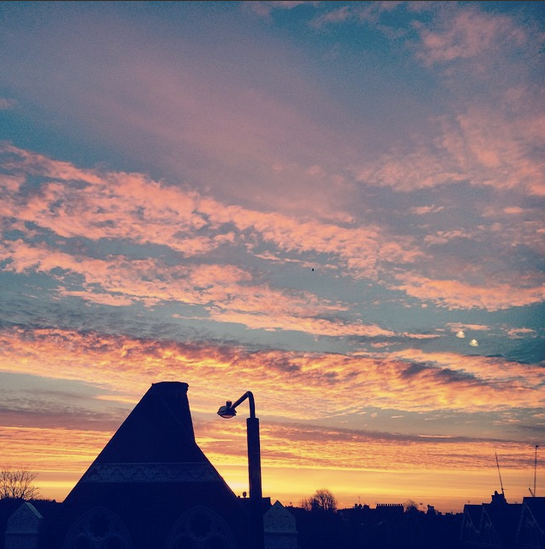 I will take one photo of the sky a week, maximum

I daren’t look it up for fear it’s something ominous to do with climate change, but I SWEAR the sky is more beautiful these days than it used to be. Or perhaps I’m just more boring these days than I used to be. Either way, about 40% of my camera roll is of pink sunrises, pink sunsets, pretty aeroplane trails and vaguely hazy spots in the blackness that I think are supposed to be the moon. I should probably tone this down a tad, partly because I worry I’ll start falling over backwards like a penguin and partly because weirdos might be able to work out where I live from the view out of my kitchen window.

Maybe I am the only person for whom this has become an actual issue, but I find that when I’m really, really busy I tend to carry on tweeting and simply stop reading other people’s tweets. It’s the digital equivalent of turning up at a party for 15 minutes, shouting “HERE’S EVERYTHING ABOUT ME RIGHT NOW”, grabbing a sausage from the buffet table and leaving again.

It’s impolite, and it also means I miss stuff. I miss people’s domestic dramas and work problems, I miss scandal and gossip and I miss everyone being hilarious about a TV show I didn’t know existed. It also means that while Twitter pals have spent a good many characters consoling me on a slightly dissatisfactory sandwich, I haven’t said two peeps about the fact their Nan just died. This must stop.

Part of the reason I currently live in my @-column is that I am following 1,751 people. This is obviously ridiculous.

If those studies that say humans can only actually handle 150 acquaintances and five proper friends are right, then 500 is probably the optimum number of bobbing avatars we can keep up with before the whole thing becomes a frighteningly fast-moving stream and we’re forced to cling to a rock for safety. Maybe 700. The trouble is that the more people you follow, the harder it becomes to remember which people you actually enjoy following and which of them haven’t brought any joy to your feed since the Great Hashtag Gameathon of 2009.

But this is the year I’ll actually set aside time to give my list a drastic haircut, so that it grows back all shiny and healthy again. I’ll also actually start using lists to separate out my follows, a mere five years after I first said ‘Gee, I should really use lists.’

Because sometimes, SOMETIMES, there are messages in there from people you actually ought to reply to, who sent them back in August and have been thinking you’re colossally rude ever since. And if not, all the messages from dudes posing against cars who think “ur cute” can be pretty amusing.

I will limit my hate-follows

It would be unrealistic to stop hate-following at all, and besides it’s probably good to be reminded every so often that the world is full of noobs, but in 2015 I will try to select only a few choice hate-follows and banish the rest to the digital vortex. Quality, not quantity, that’s the key.

I don’t need to hate-follow more than one beauty blogger who only ever, EVER posts photos of their own flawless face. I can make do with a single daily reminder that people I went to school with really love to share posts from WeRLadz.com. I will refrain from screengrabbing every obnoxious humblebrag to send to five people in a text marked ‘HOW ARE THEY ALLOWED TO BE?’

As a result I’ll probably be a sunnier, better-adjusted person. And maybe, in turn, have fewer people hate-following me.

I will stay on top of my digital admin

‘Lovely, an invitation to a thing! I’ll reply to that in a minute.’

‘Must reply to that once I’ve finished this biscuit.’

‘There was something I meant to reply to, wasn’t there?’

‘Hmm, this week is looking quiet. Sometimes, I swear all my friends have forgotten me.’

‘Everyone had a party without me! I am hurt and furious.’