With thanks to EE for the handset

I’m one of those intensely crappy people who have a passionate alliance to one side of a tech war. In fact, I have several. I’m firmly PC over Mac (though I’ll probably go Chrome OS when it’s more developed), digital media over physical, and Android over iOS. I have ranted about my distaste for Apple, Macs, iPods, iPads and iPhones at length. Everyone I know is sick of hearing about it.

So giving me an iPhone is probably the meanest thing you can do. Not only does it force me to engage with a whole new ecosystem (previously, it was a point of pride that I didn’t even have an iTunes account), but it puts me in a lose-lose situation. Why? Because there’s no good outcome for me.

Outcome 1: I love the iPhone, never want to be without it, and never hear the end of it from my smug friends.

Outcome 2: I don’t like the iPhone and everyone says I was biased and never gave it a chance.

Nonetheless, I agreed to ditch my beloved OnePlus One for a month and go full Apple native. I’ve used BlackBerry and Windows Phones and got on fine, how bad could this be?

OK, first off, the box for this thing is ridiculous. It looks like a printing error. There’s no image, just a raised profile of an iPhone 6. And I just about gave myself tennis elbow trying to prise the lid off – I know there’s some apocryphal story about the time it takes to open an iPhone box being carefully designed by Steve Jobs to raise anticipation, but I don’t appreciate having my time wasted by arrogant packaging. 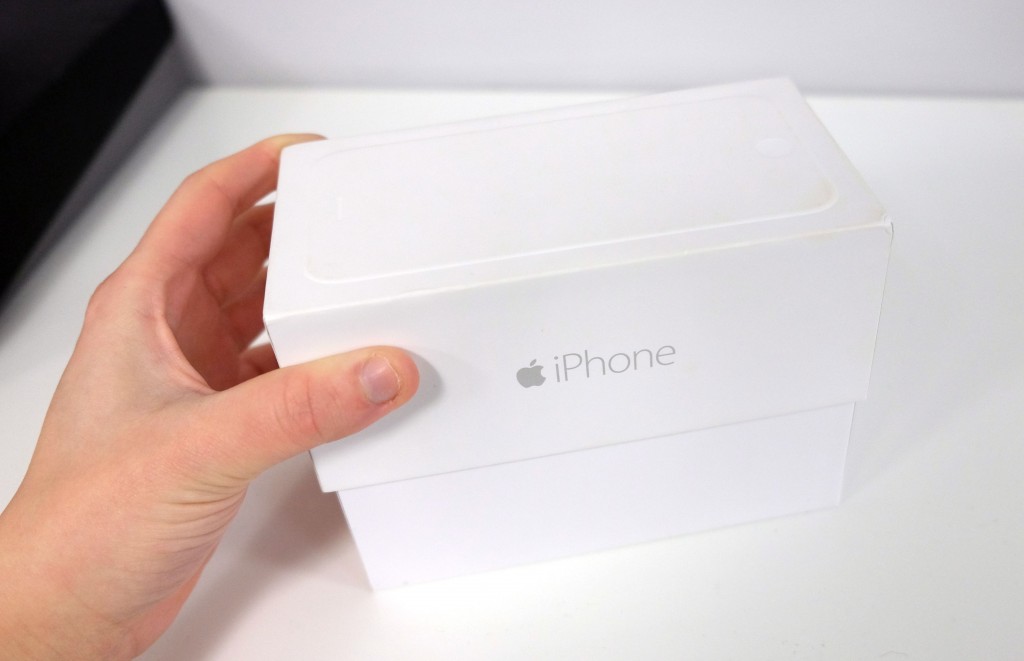 I’m willing to admit, though, that at this point I regarded the iPhone with anxious suspicion, like a child who turns up on your doorstep and says you’re its mum. I don’t want it, I don’t want to like it, and I kind of wish it had never arrived. 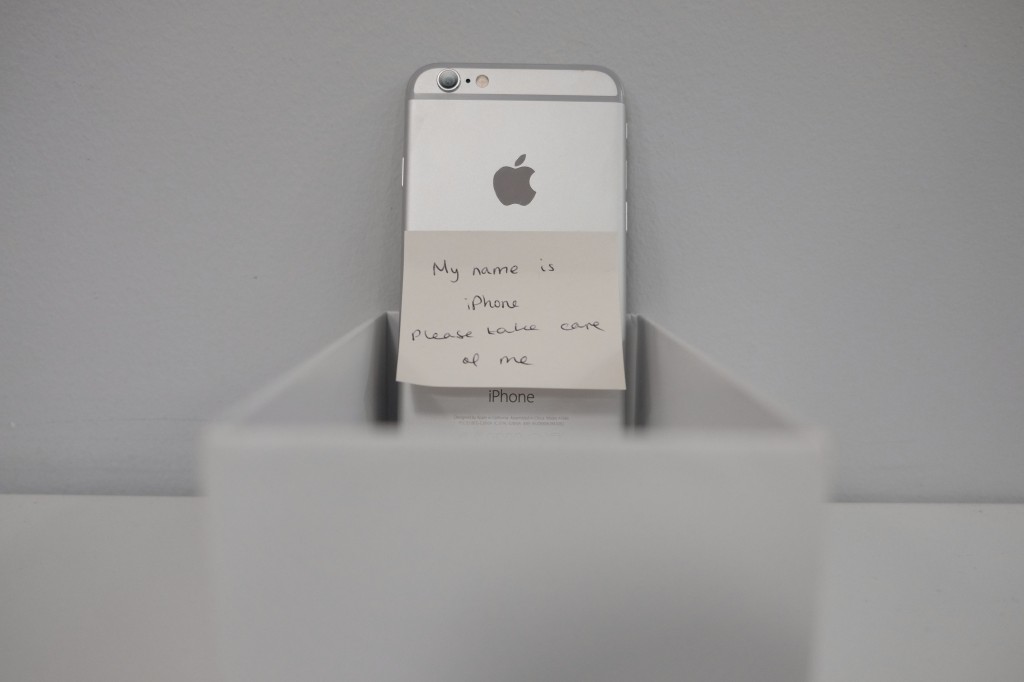 Unboxing the incredibly shiny handset, I found that my review model came minus a charging cable. This is an accident, probably caused by the previous reviewer hanging onto it (Apple cables cost more than black market kidneys), but it caused me a problem I wouldn’t have had on any other phone: I couldn’t charge the blessed thing, because unlike every other phone and device ever, it doesn’t use micro-USB. Oh noooo. It’s a special snowflake and has its own proprietary cable. So I had to wait ’til a replacement arrived to even turn it on.

First impressions, then? I want to send it back to the orphanage.

Getting set up – and reluctantly entering Apple World

Normally when I’m setting up a new phone (and I do this a lot), I put in my Google account details and everything falls nicely into place. Even setting up a Windows Phone handset was pretty easy because I have a Microsoft account left over from my MSN Messenger days (RIP). But with the iPhone, I had to set up an Apple account, which is where I ran into my first issue with iOS. The keyboard. When I switch between upper and lower case on my Android phone, the letters on the keyboard change: 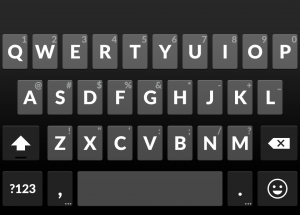 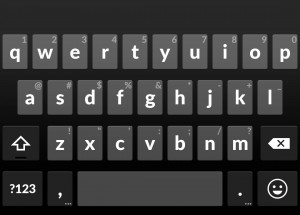 On an iPhone, however, you get one tiny indication of which case you’re using. Can you tell which one is which? 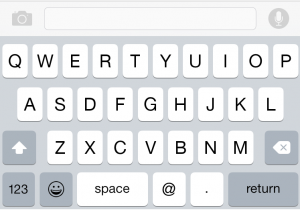 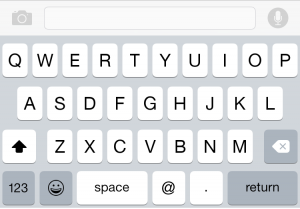 If you said yes, it’s because you’re an Apple user. Not because it’s intuitive. And that’s the first major realisation I had about iOS: after years and years of everyone telling me “it’s soooo intuitive!”, it turns out that only applies if you’ve been using their products for years. Which means, you know, not actually intuitive. Just familiar. (The dark grey shift button means upper case. I think. I still can’t remember).

After faffing about for a while getting my upper-and-lower-case password put in correctly, I started downloading my usual suite of apps. I found the progress indicator – a tiny circle – a bit useless compared to the Android progress bar with filesize information, but it’s not terrible. It’s just an indication of a general trend I saw with iOS vs Android: Apple assumes you don’t want to be bothered with details. There’s a lot less info and customisation across the phone compared to what I’m used to, which will suit you perfectly if you’re not really a “tech person”. Android fans tend to be geekier, the tinkerers of the phone world, whereas Apple fans are more design-orientated – and you can see the difference between the two OSes. Apple’s is prettier and simpler, Android’s is techier and more changeable. Neither is wrong, they’re just different strokes for different folks. Still, I know which one I prefer.

OK, how the heck do you do anything on this phone?

When I needed to put my phone on silent, I did what I always do – held the ‘volume down’ button until it hit zero. This has worked on every phone I’ve ever used. Two minutes later, the iPhone made a noise. Wait, what? Oh, it turns out there’s a separate physical switch for no reason at all that puts your phone on vibrate. If you want to put it on silent WITHOUT vibration – well, even iPhone users couldn’t tell me how to do that. Again, intuitive? Hardly. Also, the lowest volume should clearly be silence, as with every volume knob on every audio device ever, but the iPhone volume buttons don’t let you do that. Instead, they’ve built a whole new switch, yet haven’t found space or money for a dedicated camera button. Baffling decisions abound on this phone. 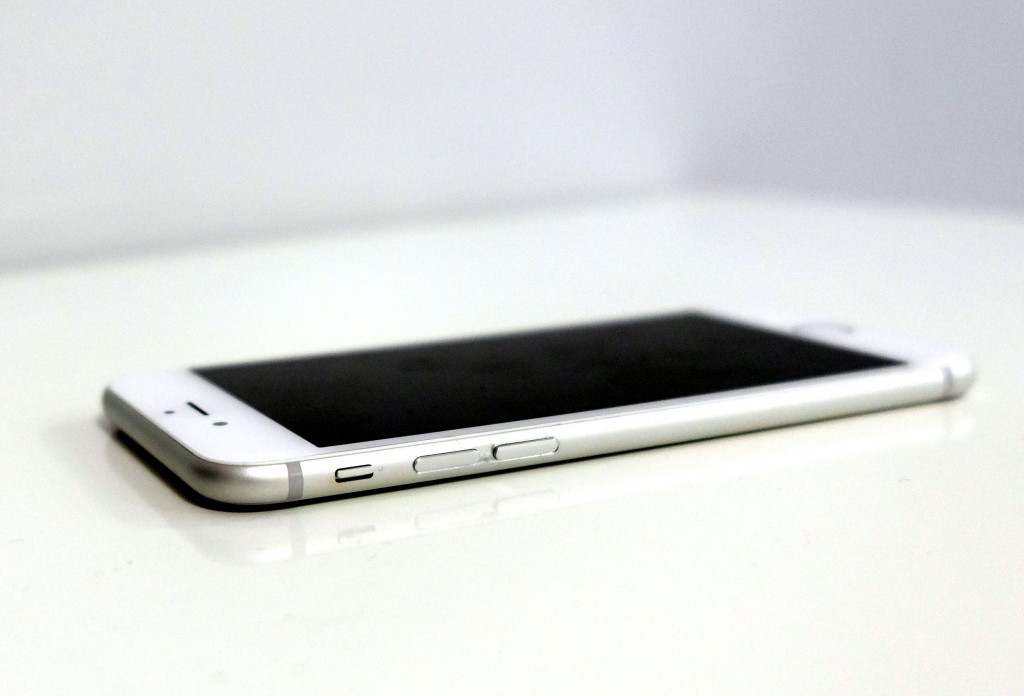 Speaking of the camera, there’s a little icon in the bottom right of the lock screen. I tapped it and it sort of bounced. What? Oh, apparently you have to pull up from the bottom to get the camera. How obvious…! Also, why does it make a camera noise when I turn the screen off? For a second I thought I’d accidentally taken a screenshot – which is ironic, because when I actually tried to take a screenshot, I couldn’t.

I worked out that the Power + Home buttons were the magical combination, but held them down for so long that the phone turned off. Unlike Android, the iPhone doesn’t want you to hold the buttons ’til it takes a photo: it takes it as soon as you release the power button. Not bad, just different.

What IS bad, though, is that I can’t then upload the screenshot from my photo album to Dropbox. I can select it, I can tap Share, but Dropbox is not an option despite having the app installed. Instead, I have to go into Dropbox and select ‘upload files’. A workaround. Annoying.

Apple likes simplicity, and the single button at the bottom of the iPhone is testament to that. I’m used to soft keys rather than a proper push-in button, but I got used to that quickly. What did bother me, though, was the lack of Back button. There is no Back button at all. How do people live without it?! Argh. Instead, every app has its own way of going back, and this is one thing I never got used to in all the time I used the phone.

…But I’ve gained a lot, too

One thing I was really looking forward to as a member of the iPhone Tribe was having access to all the apps. As an Android user, you often feel like the second-class citizen of the smartphone world: everything comes out on iOS first, and you’re lucky if you get the New Big Thing six months after it was cool. The same goes for features – new functions for Instagram, Vine and co often roll out to iOS first. I completely get why this is (#fragmentation) and if I were a developer, I’d do the same. But that doesn’t stop me ranting about always being late to the party (with apologies to BlackBerry and Windows Phone users, whose apps arrive just in time for the post-party cleanup. If at all).

As luck would have it, of course, when I got the iPhone 6 there weren’t actually any apps I couldn’t get on Android that I wanted. But I happened to be trialling Sleepphones at the same time, and the official app was iOS-only. It was so strange – and so brilliant – to think “I can actually get that” for the first time ever. If something exists, it’s available for iPhone. The same goes for cases and accessories: there is an enormous range of amazing cases for iPhones, and nowhere near as much for any other phone. Only the Samsung Galaxy S5 even comes close, and it’s still a very distant second.

iPhone privilege is definitely a thing, and – I can’t lie – I enjoyed having it.

The one feature I’m really going to miss

My entire family have iPhones. It turns out they’ve all had a group iMessage chat going on for years without me, and the first day I used my review iPhone, I was added to it. People laugh when I say it’s like a secret society, but it actually feels that way.

Almost immediately, my family members started FaceTiming me instead of calling. Video calling is hardly new, but none of them use Skype, and expecting them to change their habits just for me is pretty unrealistic. Before long, I’d got used to my little sister seeing me with wet hair, no makeup, and even still in bed on a Sunday morning. She wasn’t calling at different times – it’s just that now she could see me. And it made all the difference to our conversations.

Calls between us have doubled since I got an iPhone. Being able to see each other means I can tell when my little bro is earwigging in the background, I can see my sister laughing at my lame attempts at jokes, and she can see me being mock-offended when she says I’m too old for cool things. It’s so much richer than a voice call. Apple didn’t invent or pioneer video calls, they just did what they always do – take a feature that was only popular with techy people and make it simple, accessible, and mainstream. They’ve done the same for MP3 players, smartphones, tablets, even phablets. You can’t fault them for it – it’s been really good for tech. And humanity. And Apple.

One month later: am I converted?

In a word, no. I dislike pretty much everything about the iPhone: it’s unintuitive, information-poor, and nigh-on impossible to customise beyond the superficial. It’s not for me.

Having access to the full range of apps for the first time ever, using FaceTime, and (I hate to say this) being part of the crowd was good. I liked it. And I’m going to miss it.

I’ll never swap my Android for an iPhone, but you might see me with an iPad before long. And that’s a pretty major change for me.

You win this round, Apple.

Fancy an iPhone 6 of your own? Get it from EE now.