This week, Twitter has been protesting economic and gender inequality, bad lunches and red carpet mistakes. Here’s what you need to know.

As everyone gears up for the release of Mockingjay: Part 1, the penultimate film in the $800 million-grossing Hunger Games franchise, US activists The Harry Potter Alliance have turned Suzanne Collins’ fantasy story into something that goes way beyond the big screen.

As part of its Odds In our Favor (sic) campaign, the organisation launched #MyHungerGames to shine a light on the realities of modern-day poverty.  ‘The Hunger Games resonates in part because it hits at the very human heart of the oppression of poverty,’ writes Alanna Bennet for The Mary Sue. ‘These movies hit closer to home than your average franchise fare, especially in a time and in a country that is so heavily afflicted with income inequality — and so unwilling to have a real conversation about it.’

So far the stories of economic inequality shared with the hashtag include parents struggling to feed their children, gravely ill Americans who can’t afford healthcare and employees forced to work crazy hours on minimum wage for the country’s richest corporations. Suddenly The Capitol doesn’t look like quite so imaginary. Read the full Storify here.

I don’t know how to tell my mom that the best Christmas present she could get me is to find a way to stop living in her car. #MyHungerGames

A woman was assaulted and publicly stripped by a mob at a bus stop in Nairobi earlier this month, for the crime of wearing a miniskirt. Accused of ‘tempting’ men with her outfit, the whole attack was captured on video and sparked protests in Kenya, with protesters wearing short skirts as a show of solidarity and waving banners with the slogan ‘My Dress My Choice’.

On Twitter #MyDressMyChoice has quickly gone viral, as campaigners lend their voices to the crowds shouting back against the policing of women’s clothing.

We’re all familiar with the story of Emily Thornberry’s misguided/sneering/justified/snobbish/irrelevant/terrible/ok tweet from Rochester by now – but wherever you sit on the opinion spectrum, the hashtag was worth following for the parody takes on #WhiteVanGate.

From sexy Jane Eyre heroes to daleks, there was a little something for everyone… and a reminder, if we ever needed one, that social media can be a very cruel mistress.

What do America’s First Lady and Essex’s biggest export, Jamie Oliver, have in common? They’ve both tried to tackle childhood obesity by addressing school lunches – and they’ve both received less than grateful reactions.

This week, students across the US began tweeting their sarcastic thanks to Michelle Obama with photos of their dismal cafeteria lunches – which apparently comply with new USDA guidelines on fat, salt, sugar and calories in school food, backed enthusiastically by Mrs Obama.From ‘mystery mush’ to a single frankfurter and an apple, the offerings are undeniably gag-worthy… though if 90s TV taught us anything, it was that American school canteen food ALWAYS looks disgusting, right?

The USDA have responded to say that the photos ‘do not fully reflect the full range of choices students are provided’. Shocker.

Had a very #healthylunch today. The apple definitely made up for the “mystery mush” #ThanksMichelleObama pic.twitter.com/RWCnQRCxJK — Hunter Whitney (@huntwhitney4) November 13, 2014

Tip for #EntitledWhinyTeens: Don’t like your school lunch? Make your own. A lot of folks would be grateful 4 a hot meal #ThanksMichelleObama — Vanessa Rumbles (@VanessaRumbles) November 21, 2014

Selena sang, Taylor cried, J-Lo and Iggy didn’t shock as much as we were expecting and One Direction won stuff. The American Music Awards happened and they were pretty much all we’d hoped for and more (considering we didn’t really know they were happening until they happened).

Just saw the list of winners from tonight’s #AMAs. I can’t wait to google everyone tomorrow to find out who they are. #IAmOld — Cristela Alonzo (@cristela9) November 24, 2014

Help is at hand for any of us struggling to write a Christmas list for Santa this week (‘Um… more scented candles?’), as Bloomingdales has just started selling a diamond-encrusted hashtag ring for $825.

Made by New York-based Khai Khai Jewelry, the ring is also available in black diamonds and can be paired with an @ ring or a necklace that reads ‘YOLO’, ‘FOMO’ or, the most zeitgeisty of them all, ‘Kale’. Race you to the internet! 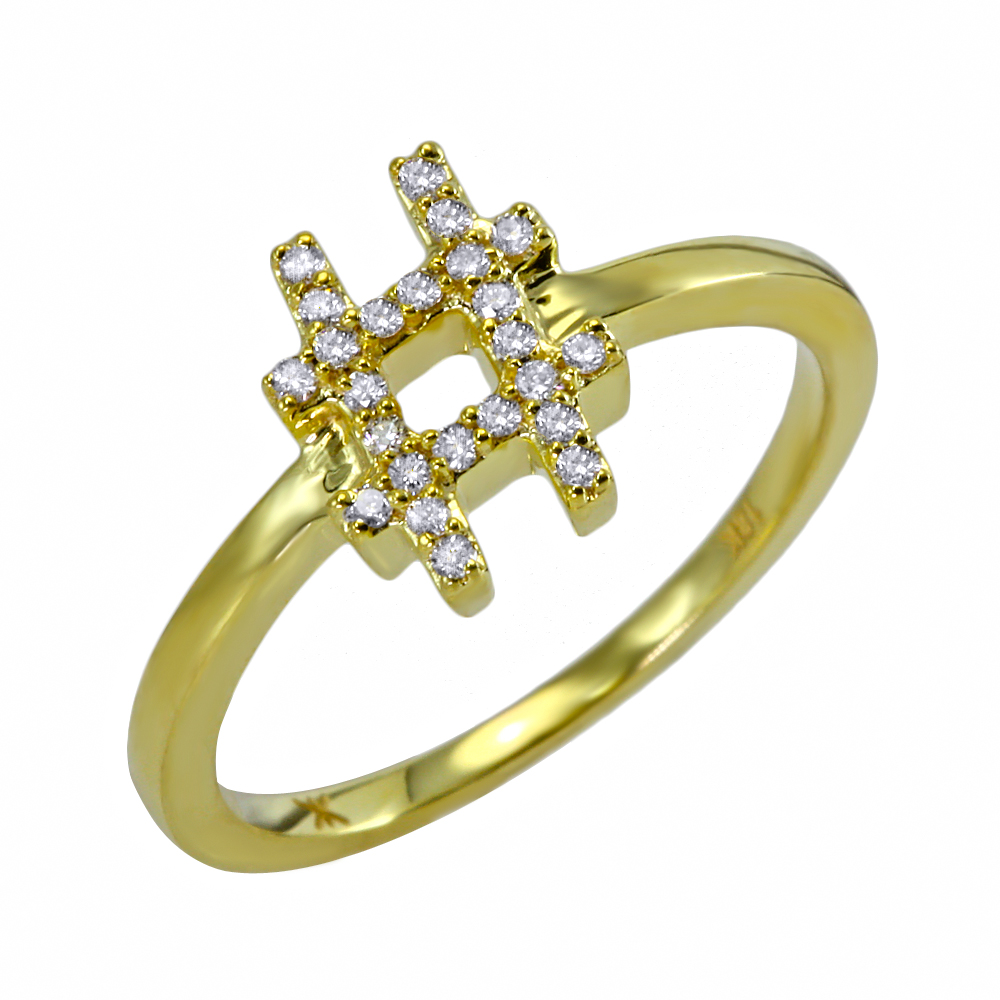 Love tech? Got opinions? Want to win a £50 Amazon voucher? YES TO ALL OF THE ABOVE? Go and vote in the ShinyShiny Awards.