OK, hands up, I admit it when it comes to smart cars I’m a bit of a fan boy. I’ve owned a smart fortwo for 10 years now (Smart as a company has been going around 16 years) and I love its quirky ways. Despite its diminutive size it’s actually not the easiest car to drive and with a semi-automatic gearbox (no clutch but six gears) it’s downright unusual. But that’s all part of the charm.

However, the problem like all two seater cars is that it’s a little antisocial, especially when there are three of you in a family plus a dog. So when the invite popped through the post to test drive two new models, including a four seater version, in beautiful Barcelona of all places, who was I to refuse! In fact it was pretty good timing as my wife had already decided she wanted the new smart after seeing the YouTube video here.

The first thing to say is that both models are without doubt an improvement on previous models (the previous smart forfour was discontinued nearly 10 years ago). The fortwo feels a lot more contemporary in design and although it’s not stuffed with technology there is more than you would expect in a relatively low-priced car. Interestingly both the fortwo and forfour start at similar prices – about £11,100 for the two seater and £11,600 for the four seater. No wonder then that the forfour is expected to account for around 80 per cent of smart sales in the UK. 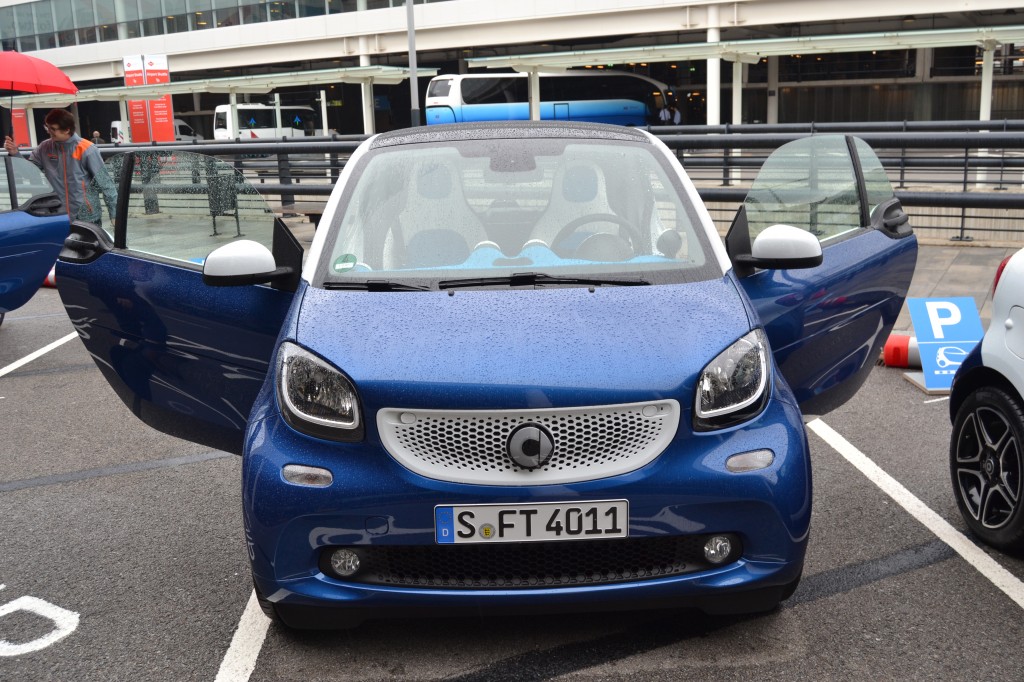 With the new fortwo smart has kept the essential look of the current model, but made it a little bigger – with a slightly larger snout and a wider body. Power is provided by a 898 or 999cc rear engine with the car available in different versions including 45kW/60hp, 52kW/71 hp and 66kW/90hp variants.

We tested the more powerful ‘turbo charged’ (66kW/90hp) smartfortwo called the Proxy around the streets of Barcelona and we were pretty impressed. For a start it looks great with a panoramic roof and sporty wheels, but it also handles pretty well and has a lot of poke for a small car. The manufacturer claims the top speed on the turbo version is 155km/h (96mph) and 151 Km/h (93mph) on the standard version but on the streets of Barcelona on a Friday afternoon we didn’t get anywhere near top speed! I can, however, categorically state that it was a lot more powerful than my own smart fortwo which I reckon has a top speed of about 80mph.

The only slight grumble I had with driving the smart is that the clutch does take a little getting used to as the point of bite is quite high up so it is quite easy to stall the car if you don’t have your foot on the accelerator hard enough.

Clever features include a Lane Assist which knows if you are veering off into another lane and will beep at you from the dashboard (handy for motorway driving) and a feature that will switch the engine off if you are waiting in a queue of traffic in neutral which should reduce fuel consumption yet further. The smart fortwo also has a very good turning circle which is great for getting into tight parking spaces and turning the car round very easily.  And if you need help with reverse parking the smart provides rear view cameras and sensors as an optional extra.

For those who don’t like changing gear all the time there’s also an automatic version (known as double clutch transmission) for the smart fortwo  – although unfortunately this won’t be available in the UK until next summer. 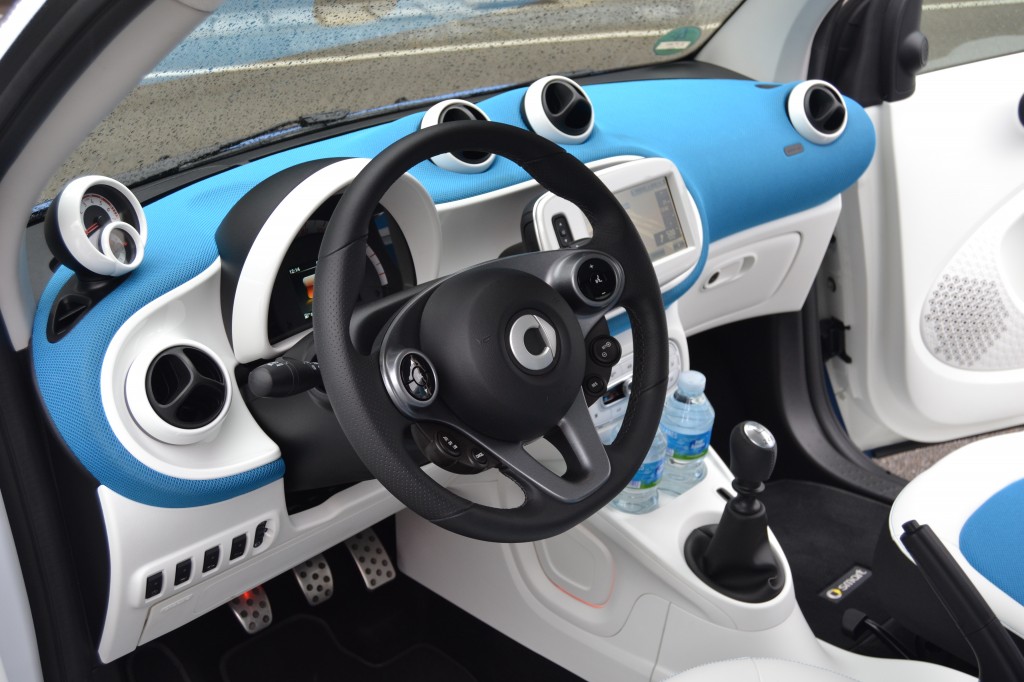 When it comes to interior styling smart really seems to have upped their game – perhaps because it knows that its main competitors in this market like the Fiat 500, the Mini  and VW Up are also pitched at the same style conscious, urban market.

I absolutely loved the styling of the Smart Proxy pictured above with its blue fabric and soft white leather, though it’s not perhaps the most practical of choices, at least for us. When it comes to in car tech the smart is no luddite either. The turbo model we tested featured a 7.5inch colour display complete with GPS and Bluetooth so you can play music directly from your smart phone – it’s even possible to show track listings alongside the maps for greater control.

There are also USB and SD card sockets down by the gear stick on the Proxy while other models in the range feature a smartphone docking station – like the one pictured below – so you can charge your own phone as well as use it for playing music etc. There’s even a smart car app, called smart cross connect that you can download. This not only features sat nav and music integration as you might expect but also comes with crowdsourced parking spots that will only fit a smartcar. Great if people take the time to populate it with suggestions.

For the new models, Smart has teamed up with hi-fi company JBL with fourtwo models featuring 8 speakers producing 240Watts of sound (12 speakers produce up to 320 Watts on the fourfour) – more than enough for most people. The subwoofer sits in the boot of the car and can be removed if needs be. 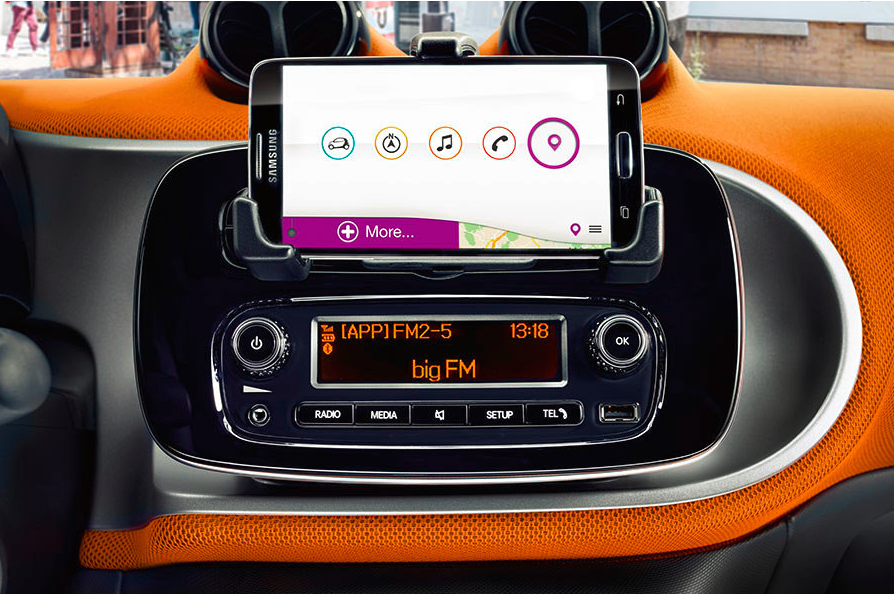 Interestingly, alongside all the hi-tech features sits some quite retro looking styling. For example, there’s the striking spherical air vents on top of the dashboard as well as a centrally positioned air conditioning unit where the desired temperature can be set with a sliding magnifying glass. It’s a  nice idea although it does feel a little bit more plasticy than I expected – like it might come away in your hand at any moment.

Other useful features include two cup holders (in my current smart car I have to balance a mug of hot coffee between my legs when driving which isn’t ideal) and a discreet pull out drawer on the passenger side where you can store coins for parking meters etc. There’s also a reasonable sized glove box and  additional storage in the side doors for a 1.5litre water bottle or similar.

Despite being a small car used mainly for low speed, urban driving, the smart fortwo is packed full of safety features too including five airbags no less (even a knee bag) and the ‘tridion safety cell’ – basically a big steel roll cage to keep you safe.  If you look at the picture below of the smart fortwo crashing into a massive S Class Mercedes you soon realise that this car is quite a bit more sturdy than you might expect from such a small vehicle. 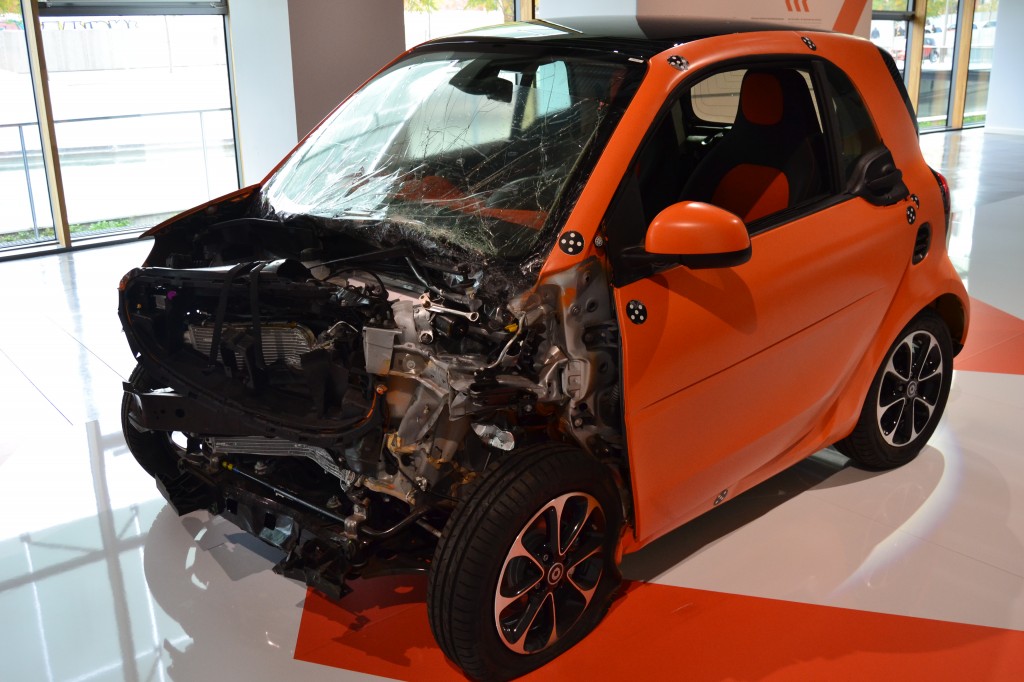 While the Smart fortwo is all very well if you just need two seats, if, like me, you need the additional seating for children and a dog then you will need the forfour. As we mentioned earlier this isn’t the first time that smart has launched a four seater option. The original smart forfour was manufactured in conjunction with Mitsubishi but was pulled in 2006 because of surprisingly poor sales – perhaps because smart was a very new brand back then and found it difficult to compete in the family car market.

For the new forfour smart has instead teamed up with French car manufacturer Renault whose Twingo II is identical to the forfour in terms of specifications but thankfully completely different in terms of design. Like the smart fortwo, the forfour is built around the ‘tridion cell’ with two choices of engine, including a 1.0 litre engine which produces 71bhp and the higher powered turbocharged 0.9 litre engine which generates 89bhp. All versions are available with a choice of manual five-speed gearbox or an automatic which is due out next summer.

As with the fortwo, we decided to test drive the turbo version in a very unusual goldy/green colour (see picture below). And rather than drive slowly round the streets of Barcelona as we had with the fortwo, this time it was a much longer trip along winding, mountain roads in and around Sitges as well as a little bit of motorway too. I can honestly say it handled very well, throughout – acceleration was good and on the stretch of motorway I went on it was more than comfortable with the national speed limit of 120 Km/h, or  75 miles per hour (again top speed is a little over 150 Km/h or 95mph).

Obviously the main advantage of the forfour over the fourtwo is the extra room, including two rear seats that can be configured in a way to give more loading space (up to 975 litres – the benchmark in this segment). It’s also possible to fold the front passenger seat down to give extra length for loading longer items (up to 2.22 metres) while getting access to the back seats is also very easy thanks to rear doors which open up to 90 degrees. Nor does it feel cramped for the driver with a steering wheel column that can be moved up and down to suit a driving position for taller drivers.

While the turning circle isn’t obviously quite so good as the fortwo given the extra length (3.49 metres compared to 2.69 metres for the fortwo), smart claims the turning circle is nearly as good as the previous forfour. This is thanks in part to the Direct-Steer system  with electric power assistance which features as standard on all smart models. 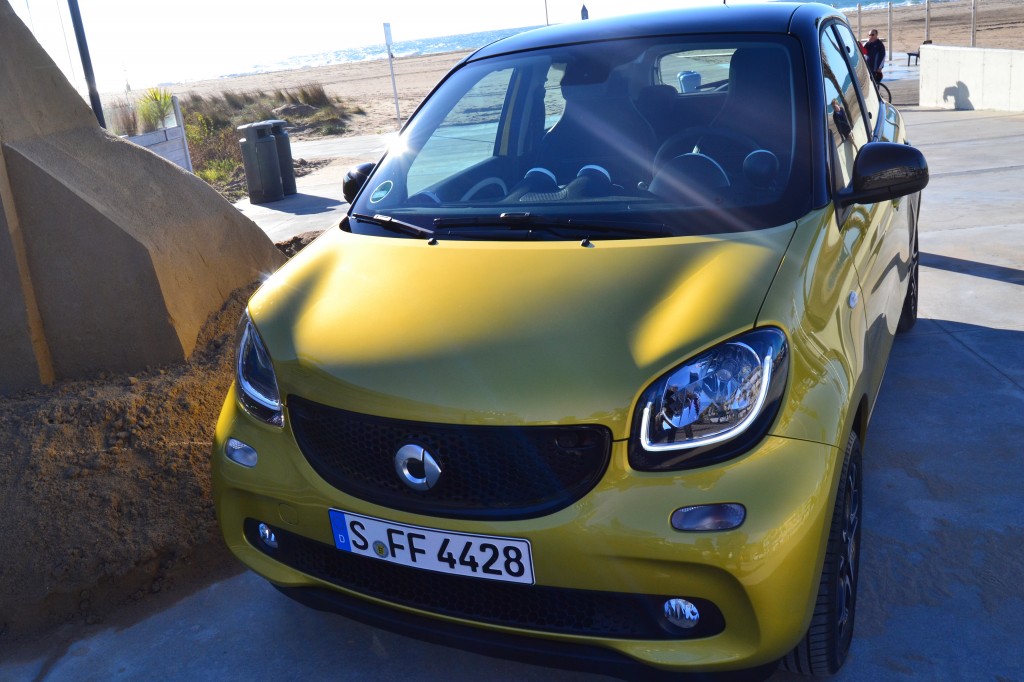 As a brand it seems smart is growing up fast. It’s easy to forget that the company is still only 16 years old, making it a relative newcomer in the automobile market. And while earlier models like the one I’ve owned for 10 years are quirky and difficult to drive, the latest models are certainly a massive improvement. It seems clear to me, though, that the future for smart lies not with the fortwo, which as a two seater really has a niche appeal, but with the forfour where it can compete with the big boys – the likes of the VW Up, Vauxhall Adam, Fiat 500 and even the Mini. Given the starting price of the forfour is just £500 more than the fortwo at £11,620 for the Passion (and just £12,315 for the Prime and Proxy), it’s a complete no brainer.

For more information go to http://uk.smart.com/ 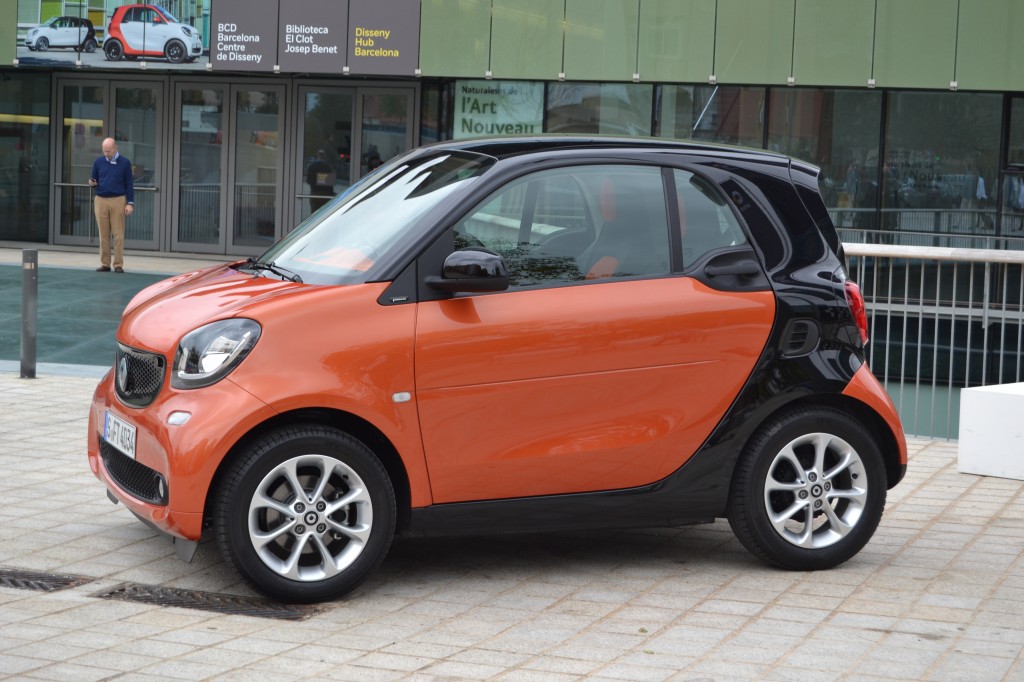