I have a bag with an in-built calculator. One of my favourite ever vintage shop finds, it dates from the late 80s and comes equipped with everything a late 80s career woman might need for successful careering. As well as the calculator, it has a built-in notebook and address book, a key fob, a pocket mirror, space for your pens and, best of all, an enormous phone pocket on the back for your enormous phone.

It’s actually attractive too – in a black patent faux-crocodile skin kind of way – and I like to take out to dinner and flourish all its components when it’s time to split the bill. I also like to imagine that in the late 80s, it represented a feat of visionary handbag engineering just as impressive and exciting as the new wave of tech-adept smart bags do to us today. ‘Look at my bag!’ a late 80s career woman would probably have said to her friends as they cooed over it. ‘For it is THE FUTURE’. 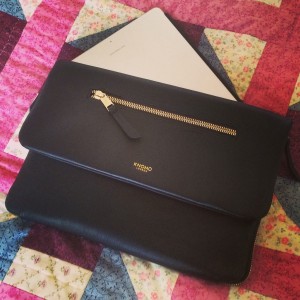 st forward a quarter century, and today I am cooing over my calculator bag’s modern equivalent, the Elektronista by Knomo London. Designed by leading Danish tech blogger Christiane Vejlø (otherwise known as Elektronista), the sleek clutch been crafted especially for our digitally-loaded lives – incorporating a wonderful maze of pockets and compartments for cards, money, passports and devices, plus a 3000mAh battery to charge phones and tablets on the go. It also unzips on both sides to lie flat, like your own little portable work station.

‘The bag I carried every day was simply not designed for the things I had in it,’ says Christiane. ‘I wanted a bag that was made for my digital life, but all I found on the market was made for men by men – I just had to have this bag. I wanted it to be made to contain all must-carry digital devices and with a respect for the carrier’s busy life on the go.’

I don’t know about my busy life on the go (most days my office-to-evening look involves changing out of my pyjamas), but a bag that’s designed with my iPad in mind definitely appeals. Despite being so entrenched in my life that I use it to watch Netflix in the bath, I’m still scared of taking it out most days in case it gets bashed about in the bottom of my cavernous sack of a handbag and ends up with old gum stuck to it. So yes, a clutch to cradle it and keep it safe would be nice, please.

Then there’s the charger, a livesaver for all of us with a tendency to Instagram ourselves empty by 11am. Knomo has been making beautiful, functional, tech-friendly accessories for a decade now, but this is their first bag with a built-in charger. And with a growing list of luxury brands such as Aspinal and Richard Nichol now producing charging bags, I’d wager in a few years it’ll seem odd to buy one that doesn’t keep your battery topped up as standard.

Of course if I were to be cynical, I’d suggest you could actually buy a little portable charger like a Powergen to keep in your normal bag and save a whole lot of cash… but then you wouldn’t have the joy of that perfectly compartmentalised work station, or the leather so soft you want to rest your face on it and have a little nap (you forgot to include ‘train pillow’ in the description, Christiane!).

You also need to remember to keep the bag charger itself topped up, which for the less organised among us is a whole other challenge. And sadly the little cable supplied doesn’t actually fit my iPad Air, so I’ve had to use my own, longer, USB cable instead.

But those niggles aside, the Elektronista is user-friendly to its core. Each little compartment is easily accessible in bag form as well as unzipped – crucial to avoid being one of those people who holds everyone up at ticket barriers. It’s also a perfect size for a clutch, compact but not stupid-tiny, and the only thing I can’t fit in it is my hefty hardback book (The Miniaturist by Jessie Burton, since you asked). But then, I have a Kindle app for that.

Give it a few weeks and I might even look sleek and professional to match – just like the 80s career women of old, minus the calculator.

The Elektronista is available now in black and February 2015 in tomato red, £249 from Knomo