I can’t eat at a restaurant unless I’ve heard that it’s good. I need a Grace Dent endorsement, at least two trusted friend recommendations or at the very least a crinkled Time Out review blu-tacked up in the window before I can risk putting my stomach and wallet in an eatery’s hands.

As afflictions go, it’s a mild but annoying one. Typically it leads to tense moments on holidays and outings – me marching people past chain restaurant after chain restaurant, them claiming ‘I really don’t mind, anywhere’ but simultaneously pulling faces at every menu they’re shown, until eventually hunger leads us to abandon the search and end up dining somewhere that basically pleases nobody.

You’d think living in London would help. All that choice! Every cuisine under the sun! No end of exciting new pop-up, rooftop, no-sign enterprises where everything is served in an upturned hat or whatever. But of course it actually serves to exacerbate the problem, because there are 100 times more places to consider and reject than there would be on, say, a night out in Bognor Regis.

I’m convinced that half the reason the jaded journos of Twitter fell in love with 17-year-old Holly Aston’s Pizza Express review last week was that it reminded them of a simpler time, a time when predictability was a good thing and the success of your dining experiences could be measured out in dough balls. Why, everyone asked themselves, do we continually take punts on places with baffling menus and long queues and staff who would rather you just hadn’t bothered turning up, when all along the most reliable source of happiness has been two mains for £10 and a slab of cheesy garlic bread?

It was in this spirit of restaurant weariness that I came to Twizoo, the new, free, iPhone and Android app that uses Twitter sentiment to help you find the best nearby drinking and dining spots. Based on the idea that real-time tweets are a much more accurate way to measure how good a restaurant is than a handful of old, irate Trip Advisor reviews, Twizoo analyses response to more than 25,000 London establishments and represents them in bubbles of varying colour and size to help nudge you in the right direction.

are seven tweets about London restaurants and pubs for every one review on Trip Advisor, so it’s a very rich source of information,’ says entrepreneur Madeline Parra, the app’s co-founder, who was inspired to create Twizoo after a disastrous dinner in Barcelona. ‘It was horrible. Clearly, the reviews online had been written by the owner and/or his/her family. I’m a big fan of Twitter, and this made me think: “Why can’t I just see what everyone’s saying there?” It’s harder to game the system and it’s tapping into real conversations.’

Madeline (who, by the way, is 27 and therefore pushing all my under-achiever panic buttons), thinks that social media has forced restaurateurs to up their game. ‘The restaurant and pub business is a tough one,’ she says. ‘You have to interact in social media, as it’s business critical. You have a great night, and 10 people can now broadcast that message to the world. You have a bad night, and those 10 people can really cause some reputation damage by sharing their experiences.’

As with so many other things, the egalitarian nature of Twitter makes for a more accurate and representative picture of a place’s quality. Critics might sneer at Pizza Express, but millions of Holly Astons declare their love for it every day online. AA Gill might hate the Thai place at the end of your road, but if 40 people on Twitter rave about it, chances are you’ll still be dropping by to order the crab cakes.

‘Twitter buzz is really interesting, as it’s comprised of comments from food critics who write for publications, food bloggers, pub enthusiasts, and a lot of normal people who love (or hate) where they just had a pint or a meal,’ says Madeline. ‘It’s also a great source for neighbourhood gems, because we pick up a lot of tweets that wouldn’t be reviewed somewhere like the Guardian.’ 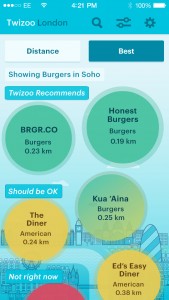 It’s quick and easy to send a tweet, too, compared to the effort it takes to write a Trip Advisor review – an act we all know is generally the preserve of angry people with too much time on their hands; people who, if you heard them ranting in the street, you know you wouldn’t trust anyway. Twizoo helpfully bypasses this issue too, by checking the credibility of each tweet against the rest of that user’s social profile.

As well as quality, Madeline and her team are on a mission to get us fed quickly (a merciful promise for anyone I’ve ever dragged around Soho for an hour bellowing ‘It’s DEFINITELY around here somewhere!’) with their at-a-glance interface: ‘When you’re on the go, you don’t have time to scroll through and read a lot of info or endless text reviews. You want a quick view, which is why Twizoo gives you all the info you need using size and colour as cues.’

Using my kitchen in Stroud Green as a starting point, Twizoo throws up 20 recommendations within a 1.2km radius, with distance divided pleasingly into ‘Closest’, ‘Short walk’ and ‘Get your Oyster’, while the other tab is divvied up into ‘Twizoo recommends’ and for risk-takers, ‘Should be ok’.

It’s not foolproof yet, though. I’m sceptical that my favourite bargain veggie curry house only gets a yellow circle (they’re not on Twitter, but they are delicious), while Garden House Chinese takeaway appears to have a top rating based only on exuberant tweets to House and Garden magazine. In central London it fares better, immediately filling in gaps in my mental address book by reminding me of three different places that I’ve been meaning to try but can never remember the name of.

If all this London chat is boring, rest assured that the app plans to devolve its powers to other cities soon too. Madeline is also launching the #TwizooFinds awards, ‘to honour restaurants that consistently receive top marks on Twizoo’. Like a lot of apps, Twizoo’s success depends partly on volume – so perhaps the more we tweet about our dinners, the better dinners we will have.

And if Twizoo tells me to eat at Pizza Express this week, I’ve only got you lot to blame.