Rumours have suggested that the phone will have a 20MP camera in the past, which does seem a lot for a handset that’s supposedly designed to be mid-range. No the rumours are suggesting that the camera will only be 10MP, which sounds about right for a mid-range phone but stands to be a big leap from Nokia’s resolution-happy phones from days-gone-by.

If you were looking forward to the 830, and now feel slightly disappointed, remember that this is still a rumour and may not be true. Even if it is, resolution isn’t the only factor that affects how good your photos are. A terrible camera can’t be saved by the fact that it has a high resolution. But we will most likely find out tomorrow, so calm yourselves until then. [WPDang via Ubergizmo]

2. Could a 64GB version of the Nexus 5 be released alongside the Nexus X?

With all the focus that’s there has (or hasn’t) been on the Nexus X, have you even considered what might happen to the Nexus 5? Nope me neither, but the rumour is that a version of the phone with boosted internal storage is on its way. Apparently Google is working with LG on the deal in order to make the phone available at roughly the same time as the Nexus X, at a price that’s slightly more affordable. Even though we have no idea how much the Nexus X will actually cost.

So a 64GB Nexus 5 eh? That would be nice I suppose, but is it really necessary? The the Nexus X is bound to have much improved hardware, are people really going to buy an older model to save money? Well people are always happy to get their hands on a bargain, even if the specs are slightly worse. Who knows, maybe it’s true, maybe it’s not. We’ll just have to wait and see. [TK Tech News via Ubergizmo]

3. A box supposedly for the new Motorola G has been spotted out in the wild

The Moto G is one of Motorola’s best selling phones, so it’s no surprise that the company has wanted to release a follow-up. We knew that the Moto G2 was coming, but we haven’t heard all that much so far. Now, though, we have pictures of what is supposed to be the phone’s retail box.

Apparently the picture was taken inside one of the warehouses belonging to Indian retailer Flipkart, the only Indian company to have carried the original Moto G. We can’t comment on the authenticity of the photo, but with IFA going on I doubt it’ll be very long until we see the real thing in all it’s glory. [GSMArena via Ubergizmo] 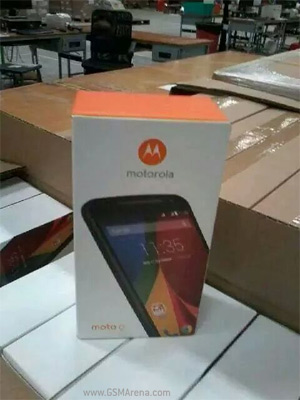